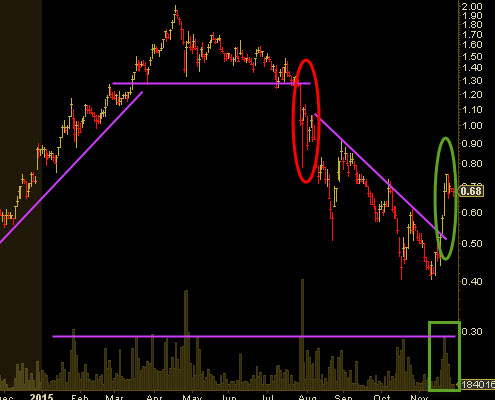 Patient Home Monitoring (symbol PHM.V) with a market cap of $240M, revenue of $51M and EBITDA of $4.9M, was one of the micro cap stars of 2014/2015. The stock peaked at $2.0 in April of 2015, and started consolidating, as shown on the chart. Early August, the stock broke down on the findings that the CEO sold huge numbers of the stocks in the investment fund which he co-founded. The market interpreted it as bad news, as the CEO probably knew something was coming. We listened in to the conference call of early September, where the CEO explained that really nothing was going wrong with the company, and that he should have been more transparent. It didn’t really help, as seen on the downtrend since August.

We remember that the company was still doing pretty well in terms of financial results, and that management was talking to institutional investors.

Meantime, although no news officially hit the wires, we believe that last week’s breakout signals a trend change. The breakout took place on above average volume. Although there was “no” news, the chart itself (price action + volume) IS the news. There is a high probability, we would say, that big money is entering the arena again, which would be the absolute condition for the company to recover from its recent crisis.

The chart looks great. The next conference call should take place somewhere in January. We will listen in again, and report back to our readers and subscribers.