Cryptoccurency NEO which is also known as the Chinese variant of Ethereum rose a spectacular 50% today. Although not visible on this chart it touched 45 USD per coin a couple of hours ago. Note that NEO was trading at 25 USD on November 1st.

According to Wikipedia NEO tries to create “a financial system that will combine real assets in the digital world.” That is of course a real-life problem, and a serious challenge (read: opportunity) on the blockchain. So if NEO manages to solve this it will be a multi-bagger.

It is very hard to assess how well advanced NEO is with their technological advancement. Their website is not revealing a lot of news, so presumably the best indicator is the price of the NEO coin (though it can be subject to pump-and-dump practices).

If (that’s a big IF) the price of the NEO coin is a reliable indicator then it is signaling that something is brewing in NEO’s kitchen. NEO popped almost 50% today, and touched 45 USD intra-day.

The chart shows how NEO broke out last week from that triangle annotated in purple.

How high can NEO rally? That is the million dollar question. Given NEO’s focus since August on China, a huge market, where it positions itself as an Ethereum smart contract service, it could well be that NEO will be booming anytime soon. However, we don’t have that confirmation, and given the Chinese intransparant market (at least, towards the West) it will be very hard to tell.

If history can be any guide then we would say this rally could have a serious leg upwards. The previous two pops brought NEO’s price ten times higher in less than a month. Will this time be the same? We do not know, but we cannot exclude.

Be that as it may, one thing is clear, NEO is one of the largest cryptocurrencies. 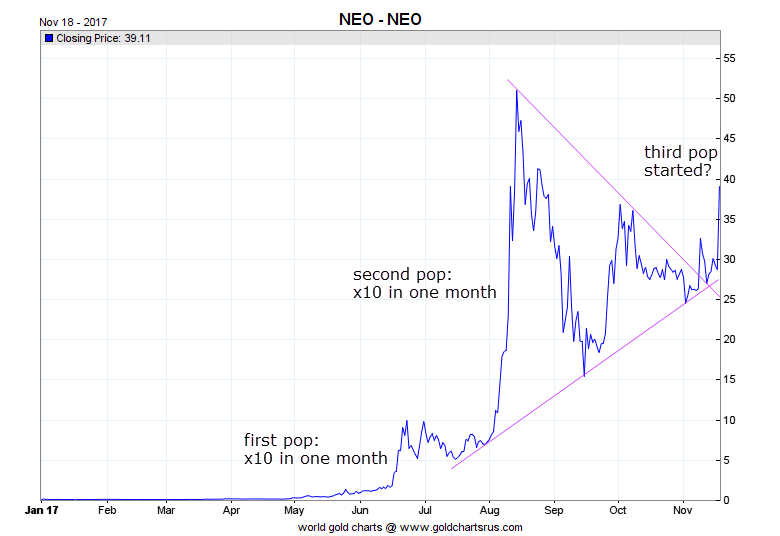