Organigram Holdings’ Selloff Morphing Into A Screaming Buy Going Into 2020

The cannabis stock sector is selling off relentlessly in the last 6 months. Our view on the cannabis sector appeared in today’s article Will The Cannabis Stocks Sell Off Finally Stop Going Into 2020. Our conclusion was that the sector is likely near a major bottom but that the sector is morphing into a hybrid market. The most promising cannabis stocks for the long term are the ones that are financially sound and have great financial prospects. We strongly believe Organigram Holdings (OGI.TO) is one of them, this is why.

It is hard to believe that this ongoing sell off in Organigram Holdings will ever stop. For 6 straight months is this stock falling.

Will this stock ever recover?

This does not necessarily mean that the bottom is in. It may take a while, as explained in today’s cannabis market update, until the sector stops falling. One important factor is the RISK ON sentiment in stock markets, especially 10 year Treasury Yields which needs to rise for cannabis stocks to get bullish again (or at least, stop being bearish).

When it comes to Organigram Holdings specifically the ongoing sell off is aggressive. This stock lost some 55 pct in the last 6 months.

The chart embedded below shows the falling channel that started in May of this year. Although support is near there is still downside potential.

We looked into all Sedar documents, trying to find any clue of shareholder dilution or any other financial report that may be the reason why investors are selling this stock.

There is no sign whatsoever in all the company documents of anything irregular.

At the same time though we only see positive comments from analysts. 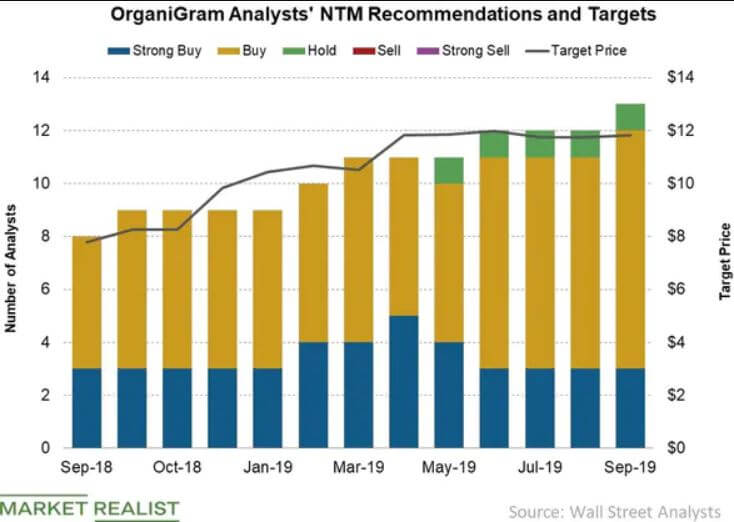 As per the article on MarketRealist commenting on the ratings and price targets of Organigram Holdings:

Probably the most surprising news came from Raymond James. Their analyst Rahul Sarugaser launched coverage of Organigram Holdings this week. He came out with an “Outperform” rating and $11.00 price target.

The analyst contends that caution is the investor’s best friend when it comes to cannabis, and as such, he comes from an intentionally conservative, fundamentals-driven approach, where he leans heavily on data from US states with up-and-running rec economies (Colorado, Oregon, Washington, California and Nevada) to construct his analysis.

Fundamentally we see already today, without this big revenue boost that is expected, some really attractive valuation metrics:

We were also pleased to hear their CEO testify that they want to avoid shareholder dilution acknowledging the current bad market conditions. The company really thinks in terms of traditional financing and bookkeeping with a vision to establish a sound balance sheet, with a preference to get a traditional loan to fund their growth as opposed to equity financing (shareholder dilution).

We encourage readers to listen to this interview, especially the first 5 minutes and 50 seconds.

The chart has several observations:

Unfortunately, this stock has more room to fall, even to the $4.00 area. We believe it will stop falling there. That’s another 20% downside.

Broad market conditions should improve, as well as the relentless selling in the cannabis sector.

With the evolution of the company, after reviewing all official company documents (not just the press releases), key valuation ratios, analysts ratings and price targets, we believe Organigram Holdings is becoming a screaming BUY opportunity. Current holders should not be too concerned, but should be able to stomach some more volatility in the short term before conditions improve.