A World Of False Breakdowns Is Very Bullish

A false breakdown can sometimes be a stronger bullish sign than a successful test.

When looking at the indexes around the world, we see several charts that are recovering from a breakdown. Some others tested the absolute bottom of their support areas.

First, in Europe, the German DAX has now confirmed a false breakdown.

Also in Europe, the French CAC index is close to that point, but not there yet. The CAC has a tendency to follow the DAX, so watch for a confirmation of a false breakdown in the coming week.

Emerging markets, represented by the EEM ETF, are back in their triangle ‘megaphone’ formation, as seen on the next chart. In January, the ETF broke clearly down, but that happened during a period of panic in crude oil. As explained before, our belief is that crude has pushed all markets down, into a state of selling exhaustion, and that pressure is unwinding now as crude has set a longer term bottom.

Over the in the U.S., the S&P 500 also broke down, but did only so during 1 trading day. Since then, the index recovered, and the chart shows a successful ‘quintuple’ test of a huge support area. 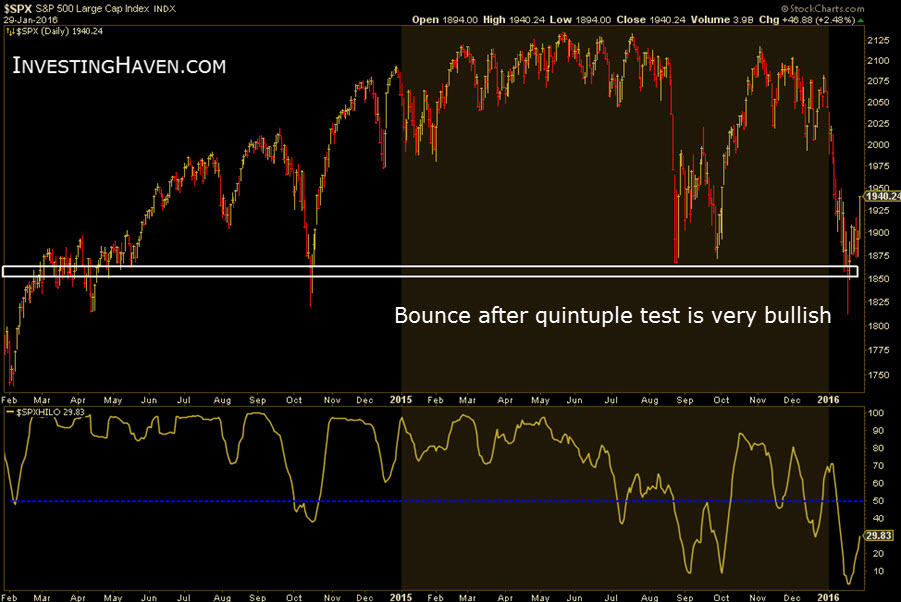 Last but not least, the Japanese Nikkei index tested the absolute boundary of its multi-year support area. The chart still looks constructive, provided that the index will quickly break through its 90 WMA.

Most indexes globally are recovering as panic in crude oil is fading, and as risk appetite is slowly returning. A strong rally would invalidate the recent breakdowns.