U.S. Stocks Sell Off Sharply. How Much Damage Was Created On Wednesday?

Further to our analysis of early this week, where we said that a strong rebound was in the cards for U.S. stocks, we saw a totally different picture today (Wednesday). Let’s revise the damage created based on the following 3 charts.

The key observation is that throughout 2015 a limited number of giants held up the indexes. Think of Amazon and Google as the prime examples. So far, in 2016, that has not happened, and, consequently, the broad averages are falling. On Wednesday, we saw a stabilization of key commodities like crude oil and copper, one of the drivers of recent declines in stock markets. At the same time, small stocks as represented by the Russell 2000 fell most.

The first chart shows the S&P 500 which is testing the 2015 lows. Lower lows are in the cards, though we do not anticipate it. But the picture is crystal clear: this is a breakdown point, simple as that.

The second chart shows the longer term (weekly) NYSE and its internals (% above 200 day moving average and new highs minus new lows). We have indicated on the chart the time periods in which the NYSE was trading below its 90 week moving average, the only technical indicator we are following, see blue rectangles. The issue with this chart is that the new highs minus new lows are only updated on a weekly basis, so it does not provide insights on today’s price action. So far, the patterns are quite similar to the 2011 correction. Based on price action alone, the chart does not look constructive, even knowing that all other indicators are stretched currently. 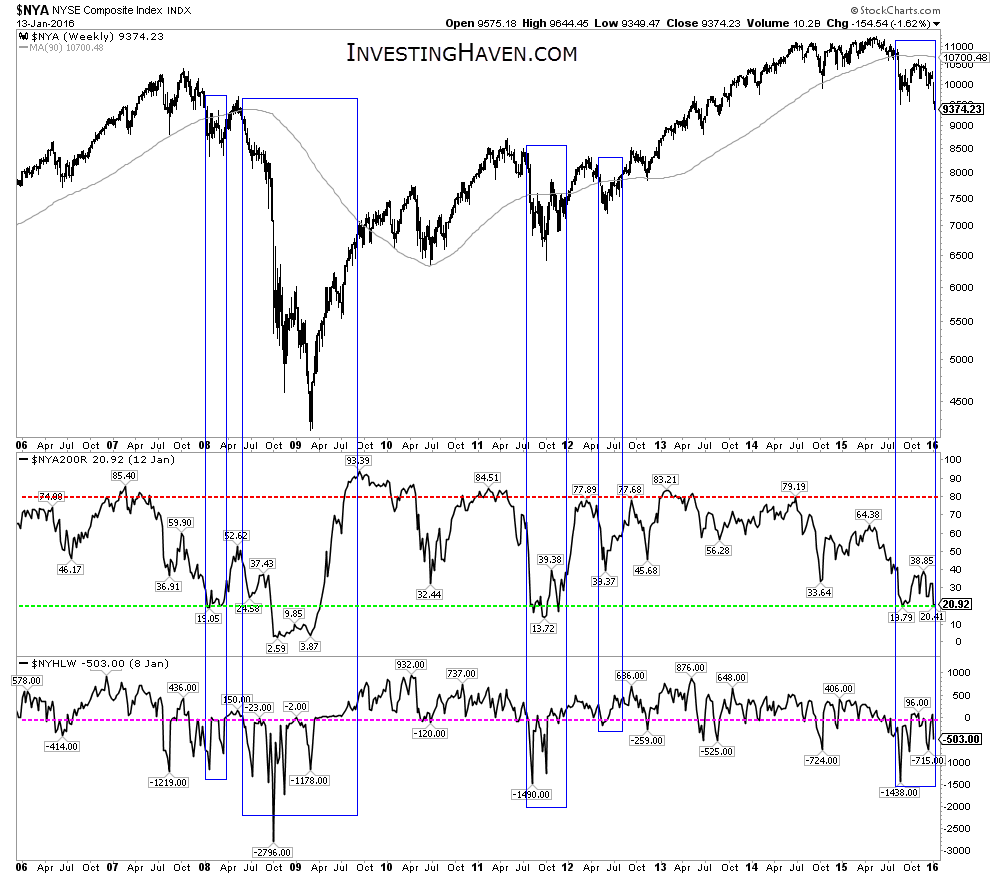 The real concern comes from this chart: bonds seem to be breaking out compared to stocks. We need another day or two for confirmation, but if this structural breakout could be the real deal.

We could still argue that stock bulls get the benefit out the doubt, knowing that the breakdown levels are being tested on the broad averages (Down Jones, S&P 500, Nasdaq). The Russell 2000 and NYSE have set a lower low, which is not constructive. Market internals are weak. Bonds could be breaking out.

Our thought from earlier this week is not invalidated yet, though there is not much room to the downside left to justify our scenario, we are open and honest in that.