2016 is setting up to become a very important year for gold. Not only because the huge global monetary experiment seems to be getting out of hand, but also because of the junctures on the U.S. dollar chart as well as gold’s chart.

First, gold’s price should not only be considered in U.S. dollars, but also in non-dollar denominated currencies. Unsurprisingly, the price of gold in all currencies but the U.S. dollar has held up relatively well throughout 2015, as compared to other assets (think of stocks for instance). Some currencies devalued significantly in 2015, think of the Brazilian Real, and the price of gold in those currencies rose sharply. That makes sense, as it simply characterizes gold’s monetary aspect.

As the first table shows, gold lost 10% in U.S. dollar, Swiss Franc, and Japanese Yen. Note, however, that Yen gold is trading very close to all-time highs, and some 30% below its highs in Swiss Franc. So the picture does not look very good in U.S. dollar, but that is about the only exception. 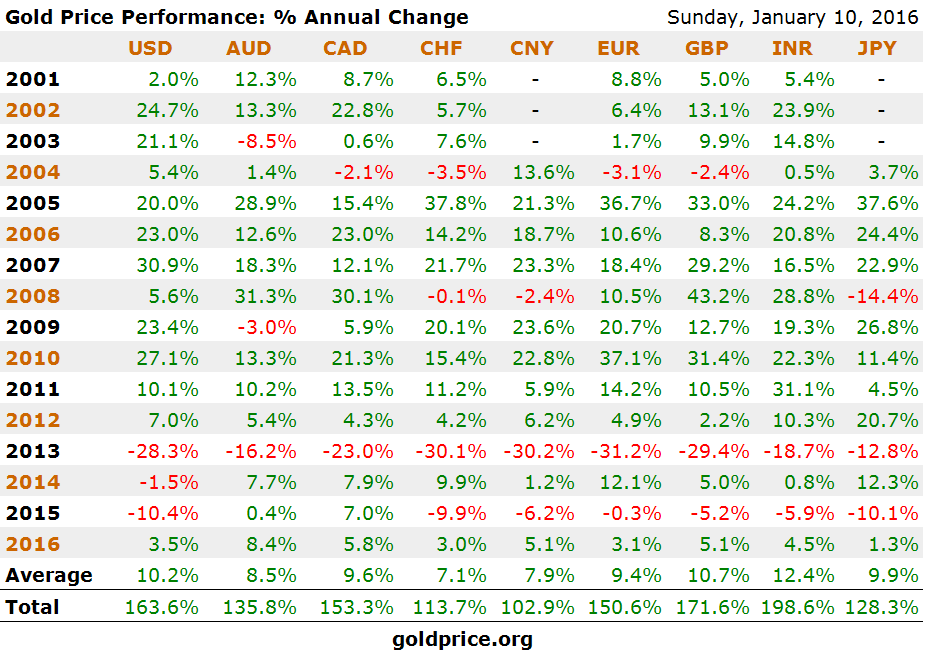 The table also learns that the collapse of 2013 was really exceptional.

That said, how is 2016 setting up? Ideally, gold bulls want to see a significant relief rally in dollar gold, which will push gold in all other currencies higher as well. We wrote recently that the U.S. dollar is breaking out from a multi-decade bear market, as shown in one of the secular charts in our 2016 Outlook Report. That is in theory not supportive for gold, notwithstanding the fact that there have been periods in history in which the dollar and gold have risen simultaneously.

Looking at the gold chart in dollars, we see that gold has arrived at a critical point, similar to the U.S. dollar. 2016 will be the year in which hard decisions will be made, mark our words. The dollar gold chart has basically created three trendlines in its secular bull market. The two ones, indicated in red in below chart, have been breached. The last one (in green) is being tested, and it is the last hope for gold bulls.

Note on the chart how the only technical indicator in our methodology, the 90 week moving average which shows the direction of the long term trend, is moving very close to the green trendline. In other words, the window is about to close, and it makes our point that decisions will be made in the not so distant future.

An important indicator according to our methodology is the COMEX futures market structure. As said before, the rate of change of short positions of commercial traders is a key indicator, combined with the level of extremeness of their positions. Both indicators are visible in the lower pane of the next chart. We see that commercial traders are for some time now in extreme territory with never seen low (net) short positions. This is by definition very bullish. Chart courtesy: Sharelynx. 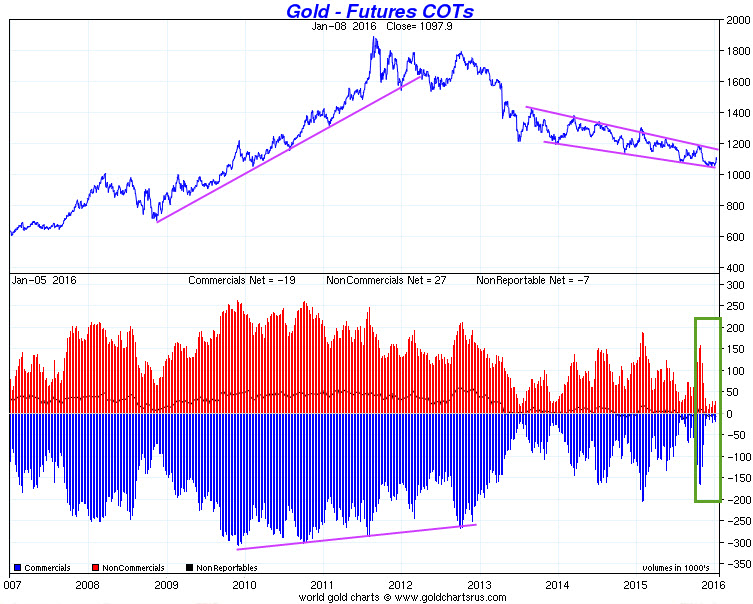 Gold bulls want to see a test of the resistance line (in purple on the previous chart) with a slowly rising net short position of commercial traders. That could open the door for a breakout.

However, we are not there yet, and the market should first do its work, before getting too excited.

Chart-wise, there is no good news yet. Next to that, disinflation is still the key topic from an economic point of view.

The gold mining sector, typically the leader in the precious metals complex, is only slowly moving higher. January is seasonally a very strong month, but, so far, strength has been contained. That does not bode well. The only positive sign in mining sector is bifurcation. One of our favorite gold miners, Detour Gold, is close to a multi-year breakout. It has closed the gap from its 2013 collapse, even as the price of gold is way behind on that point. This type of strength is present in a select group of gold miners.

Dollar gold should not fall below the $1,100 level in order to remain in its bull market. The COMEX gold market structure has a very bullish setup, but the U.S. dollar is breaking out from a multi-decade bear market. Disinflation is still strong, and its bearish for gold.

At the same time, the gold mining sector, typically the leader in the precious metals complex, does not show sufficient strength across the board, as it is highly bifurcated.

We see mixed signals, with a bearish bias. Clearly, a hard decision will be made in the coming few weeks / months in the gold market.