Is The S&P 500 Topping Or Consolidating?

That is the million dollar question. We are monitoring several indicators to get an answer on that question.

First, as said in our last post How Panic In Crude Oil Is Driving The Sell Off In Stocks, Where Will It Stop, we believe crude oil is about to stop its decline. Crude and stocks have been highly correlated during panic sell offs in crude in the last 2 years. As crude has reached extreme readings on all levels (price, sentiment, deviation from its 90 week moving average), chances are high that the sell off is largely over, and stocks will retreat from here as well.

The S&P 500 is testing the 1825 to 1860 area which marks a quadruple test (bottom?), and it coincides with a consolidation area (see early 2014). This area will hold if a consolidation scenario is unfolding, otherwise stock markets could are up for more pain. We still see a bullish scenario unfolding, although this scenario is tested its boundaries at this point.

Sentiment, meantime, has collapsed to levels not seen since the August lows. Here it becomes interesting. As the next chart shows, courtesy of Sentimentrader.com, sentiment, as well as of the other associated indicators, are today at higher levels compared to the lows of August and September. That is certainly an encouraging sign. 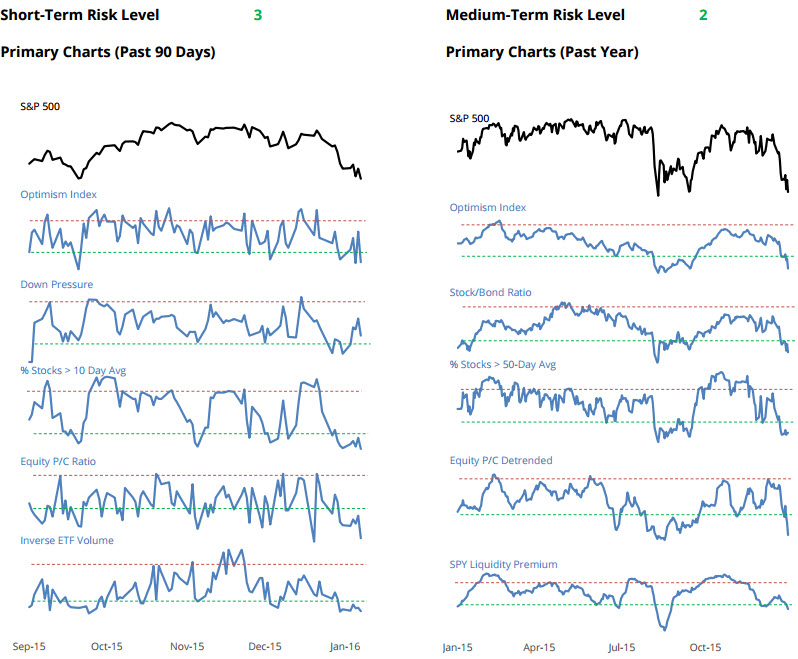 Lastly, this must see chart comes from Sentimentrader as well. It shows the S&P 500 after it lost 10% in 3 weeks right after setting a 3-year high in the past 9 months. In other words, a situation of extreme decline right after trading at multi-year highs. The chart goes back to 1928, and shows all occurrences with the green arrow. As can be seen, only the first occurrences (1936 and 1938) resulted in a strong decline in the years after, all others marked a medium term bottom.

We believe chances are high that stocks are consolidating at these levels, and that this sell off has run its course. More pain could be ahead in the coming days, in the context of a washout bottom. It is key to watch next week’s close, as a higher close would be the important indicator to watch. We believe this is a consolidation scenario, and it would be invalidated if this sell off starts accelerating from here.