Stock Markets Got Immune For Monetary Easing In 2015? 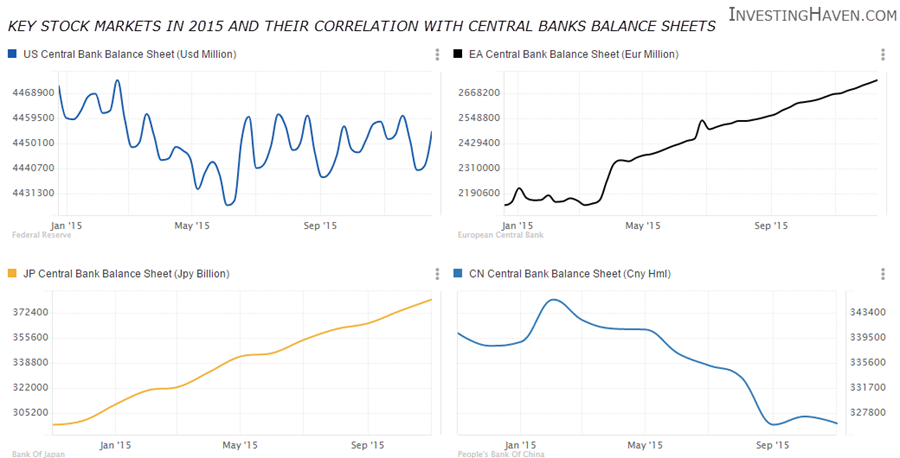 Monetary easing, also known as ‘quantiative easing’ or simply ‘money printing’, has been driving stock markets in the last couple of years. The correlation between the U.S. Fed balance sheet and the S&P 500 is widely known meantime.

The first chart shows how the correlation between the U.S. Fed balance sheet and U.S. stocks has worked like a clockwork since 2010. It also learns that stocks tended to accelerate their surge once the market knew that ‘more monetary easing’ was coming and/or ongoing. However, as evidenced by the pattern in 2011, a ‘stabilization’ or even small decrease of the Fed’s balance sheet lead right away to an underperformance of the stock market.

We created an overview of the balance sheets of the 4 largest central banks in 2015. As seen on the next chart, the U.S. Fed has slightly decreased its balance sheet, as well as the People Bank of China. On the other hand, Europe and Japan have gone wild in 2015.

Now let’s see what happened in 2015 with the stock market(s) of those respective countries/regions.

As expected, the U.S. stock market basically went nowhere this year, and is about to close the year with a very small loss, which, in percentage terms, is similar to the decrease of the Fed’s balance sheet.

China’s stock market collapsed this summer, after it got ahead of itself. Uncoincidentally, ‘tightening’ of the Chinese central bank started right before the collapse.

The real disaster is Europe and Japan. Their central banks went ‘all in’ this year, but their stock market only followed until May. 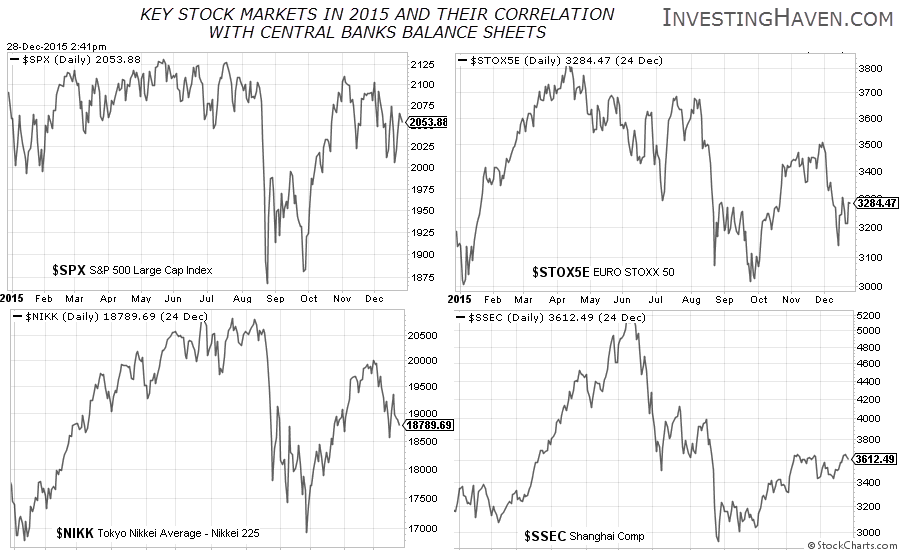 Should we conclude that the stock market has turned immune to monetary easing?

Or could it be that the U.S. Fed is ‘dictating’ the direction for the rest of the world, and the other central banks are of secondary importance?

Whatever the exact conclusion, it seems that the stock market needs increasingly more monetary stimulus to get its surge going.

All central banks in the world have committed to remain accommodative, so we do not anticipate a 2008-alike crash any time soon. At a certain point, the correlation will stop working. For 2016, however, we expect a continuation of this year’s trend.