Stocks Rallied For 2 Weeks, So This Is Not A Bear Market Rally 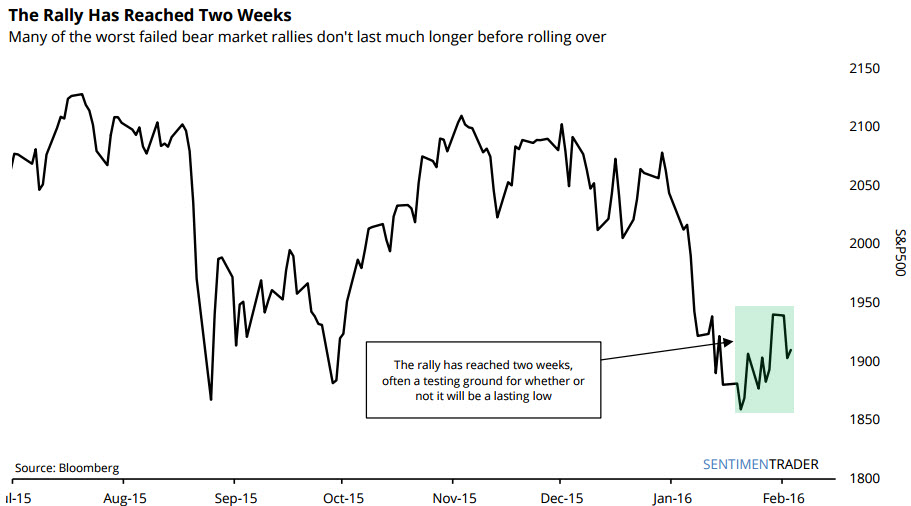 Many believe that this is a bear market rally. While we do not exclude such a scenario, our bias is more bullish. The reason is to be found in intermarket dynamics: crude oil has triggered several sell offs in the last 12 months, as detailed here. Crude could have set a long term bottom, which implies that stock markets are bottoming as well around these levels.

We said that bond markets are definitely a red flag, so their rally bears watching.

According to Sentimentrader, when a bear market experiences a relief rally, often it won’t last much longer than two weeks before rolling over to new lows. By the time it makes it to the two-week mark without a new low, it starts to generate some optimism that just maybe it was “the” low.

Now, the current stock market rally, although a weak one, has made it to the two-week threshold. The S&P bottomed 10 days ago, a window within which many bear market rallies tend to fail. Making it to 10 days doesn’t mean there is an all-clear signal, but it has been a good sign when stocks were as far above the low as we are now, even though the gain is modest. If stocks were closer to the low by day 10 of the rally, then there was a higher likelihood of seeing an imminent new low and generally weaker prices going forward.

So far, we see multiple confirmations that we are not in a 2008 scenario, both from intermarket dynamics and the comparison with (failing) previous bear market rallies. That is why we hold on to our stock positions.