US Stocks Ready To Start A Sharp Rally?

U.S. stock markets are ready to start moving. The time is ripe, it’s a matter of weeks. The only question is: in which direction? We know for sure, based on our indicators and the chart pattern(s), that an aggressive move is coming, based on the rationale we explain in this article.

There are quite some indicators suggesting risk-on sentiment is returning. One of the data points we are following is the high yield bond price, as represented by HYG, which has broken out from a downtrend that started last May/June. That is a very positive sign for stocks.

Next to that, market breadth is very strong. We are looking at the NYSE in below chart, where the advance minus decline issues moved to a 12-month high, surpassing the highs of last May. The good news for stock bulls is that this breadth indicator is higher than last May while the NYSE is trading at a lower level. The combination is a positive for risk sentiment and stock markets. 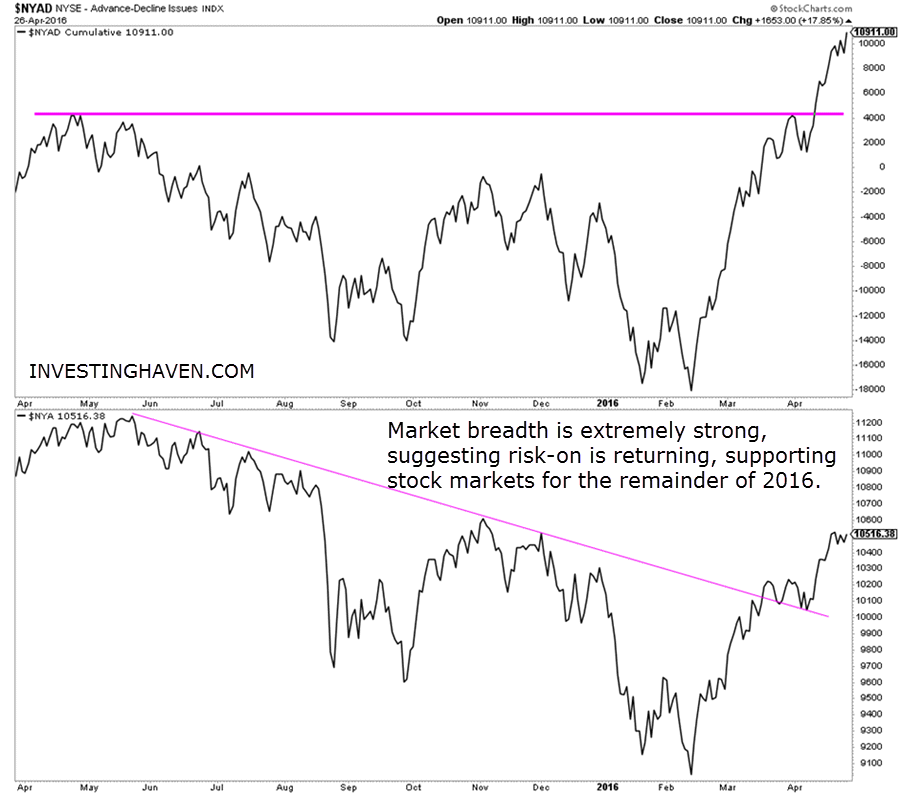 Along the same lines, we see strength in small cap stocks compared to the large caps. The small caps to large caps ratio is turning up, in favor of small caps, which typically coincides with a positive cycle for stocks.

On the other hand, as Sentimentrader rightfully points out, there are a large number of cross-currents among indicators:

There are a number of sentiment-related measures suggesting that optimism has reached an unsustainable level and which typically lead to below-average or negative returns. On the flip side, there are also a large number of studies we’ve discussed related to breadth and momentum that have been extremely consistent in leading to above-average and positive market performance in the medium-term.

One of those negatives is sentiment among small traders. This is what Sentimentrader wrote today, also note their chart.

According to two longer-term measures, data show extremely defensive activity among small traders. This is unusual given the rally in stocks since February and it’s in conflict with many other indicators we follow on the site. There’s no good way to reconcile this other than the sentiment situation is less negative than it could be if these indicators were more in line with their historical behavior. 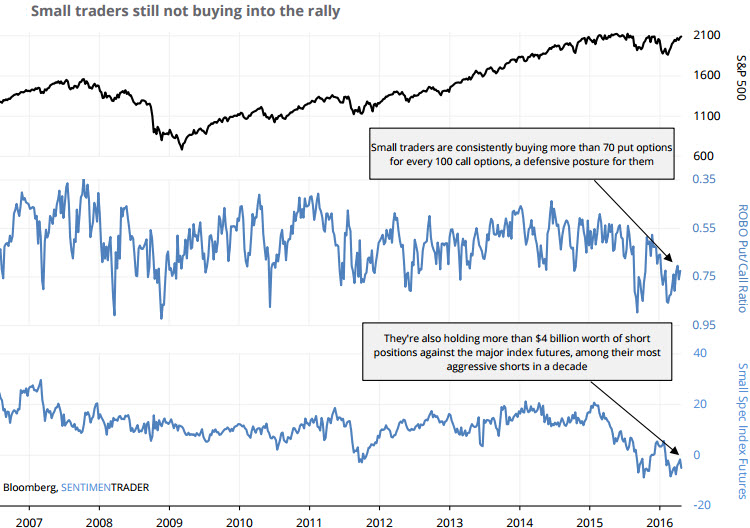 Our point is that an increasing number of data points suggest a breakout of stocks is coming, and extreme bearish sentiment (like the one from small traders) along with their extreme short positions, could drive additional power in a strong short covering rally. We favor the bullish outcome, but let the markets do their work before becoming too excited. What we do know, though, is that’s it’s a matter of weeks before we will see a new trend in U.S. stocks.