All Indicators In Extreme Territory. Watch For Signals From Bonds And Crude.

Almost all of our indicators are in extreme territory, particularly intermarket dynamics, stock market breadth, and bond markets. Let’s revise these indicators in order to come to conclusions.

We have focused on the correlation between crude oil and stocks in recent weeks. If anything, crude oil has been weighing on markets. Going back 10 years, we see that stocks and crude were highly correlated … until the summer of 2014. As seen on the first cart, stocks and crude disconnected hugely since then, as indicated with the blue rectangle. No surprise that stocks got a hard time in 2015. But given the exceptionally aggressive decline of crude, stocks held up very well from a relative perspective.

Market internals arrived at extreme levels, as evidenced by the highs vs lows index (courtesy: Stockcharts). The short term chart from the S&P 500 shows that a new 52-week low was set this week, along with a new low in the highs vs lows index. Market internals are not favorable, but, simultaneously, in extreme territory, suggesting at least a relief rally is near. If that rally is not strong enough, the ‘bearish’ scenario outlined above would prevail. 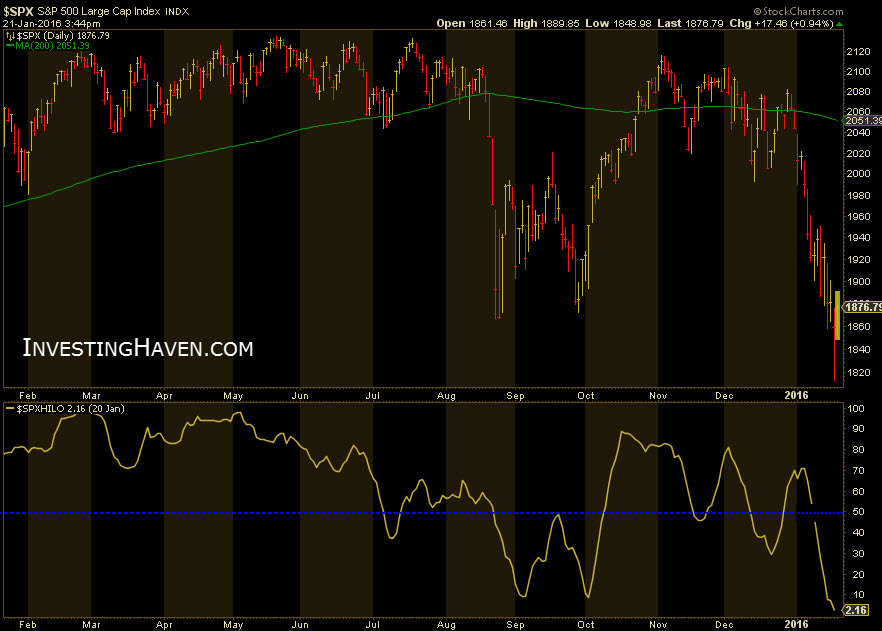 Market internals are in extreme territory, not only on the short term, but also from an historic perspective. As detailed by Sentimentrader, on Wednesday morning, +97% of volume on the NYSE was concentrated in issues that were down on the day. Between that and the average of the past 10 days, the selling pressure was the worst in more than 65 years, next to 1987-10-19 and 2011-8-08! Talking about extremes.

The most outstanding among other developments is the number of securities that traded down to a 52-week low during the day: +43% of all the securities trading on the NYSE. Going back more than 50 years, it is a rare feat to see such broad-based and persistent selling pressure that such a high percentage of issues trade at their lowest price in a year. A total crash scenario (2008-alike) apart, this suggests a bounce from today’s extreme levels. 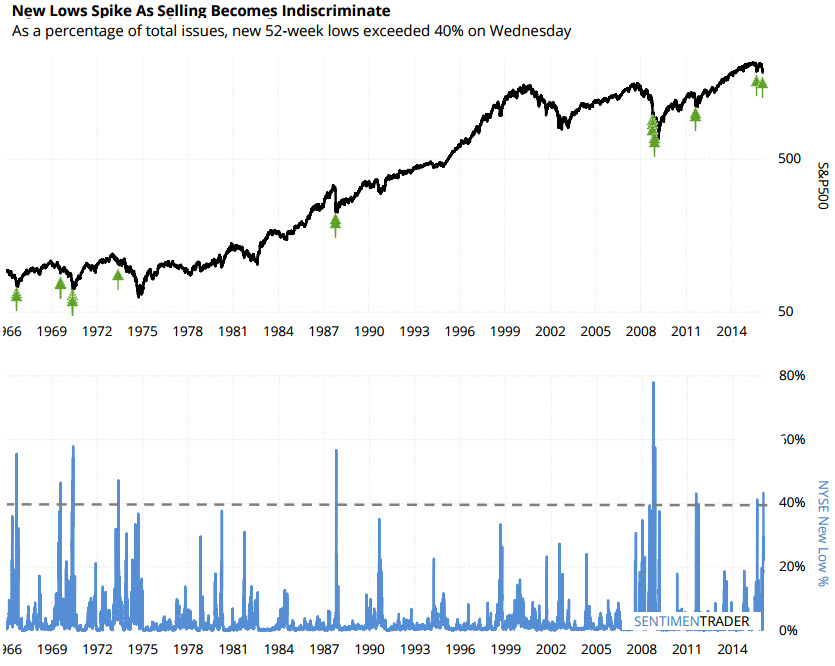 Last but not least, the bond market is testing 52-week highs. That is odd, given the ‘interest rate hike hype’ (pushing rates higher results in lower bond prices). We interpret it as a flight to safety. The bond market is clearly in conflict: higher rates suggesting lower bond prices vs flight to safe assets push bond prices higher. If bonds will push through their 52-week highs, then it would be a very strong signal to other assets, and stocks in particular.

The data presented in this article show that stocks and their internals are in extreme territory. We closely watch the bond market and crude oil, as they will provide strong (leading?) signals towards the rest of the market(s).