At the start of the year the prevailing mood in the oil market was not just one of gloom and doom but of catastrophe as the oil price sunk below $30, skidding by the middle of February to virtually touch $25, a period during which many prominent analysts and investment banks such as Goldman Sachs all of whom were bearish on the prospects for oil prices this year some even suggesting that the oil price could sink to as low as $10 (Standard Chartered) which meant that the oil producers large and small, the frackers and even a string of nations such as Russia, Nigeria and Venezuela were on the fast track towards going bust as their oil profits that financed their state spending budget deficits evaporated.

We’ll barely 4 months on and the oil market has gradually transformed from that of imminent $10 apocalypse to one of hopeful recovery as the oil price has clawed it’s way back relentlessly through a series of critical levels of first $30, $35, $40, and most recently popping above $45 to stand at a high for the year of $48! Nearly DOUBLING in THREE MONTHS! And now all those who failed to see this coming are now forecasting higher prices i.e. one of the biggest oil bears of the year, Goldman Sachs now reckons the oil supply glut has evaporated and oil prices are going to reach $51, WOW crude oil has already risen to $48!

These are the SAME fools who have been banging the drums all year for an sub $20 oil price, but now AFTER the oil price has DOUBLED are proclaiming themselves as being bullish! This illustrates an important point! Goldman Sachs and the REST are nothing more than snake oil salesmen! They clearly don’t make money trading as you or I understand it to be, for if they did they would be back to being just as bankrupt as they were during the financial crisis. Instead they make their money by doing dubious deals such as that which bankrupted Greece, by means of hiding their debt! 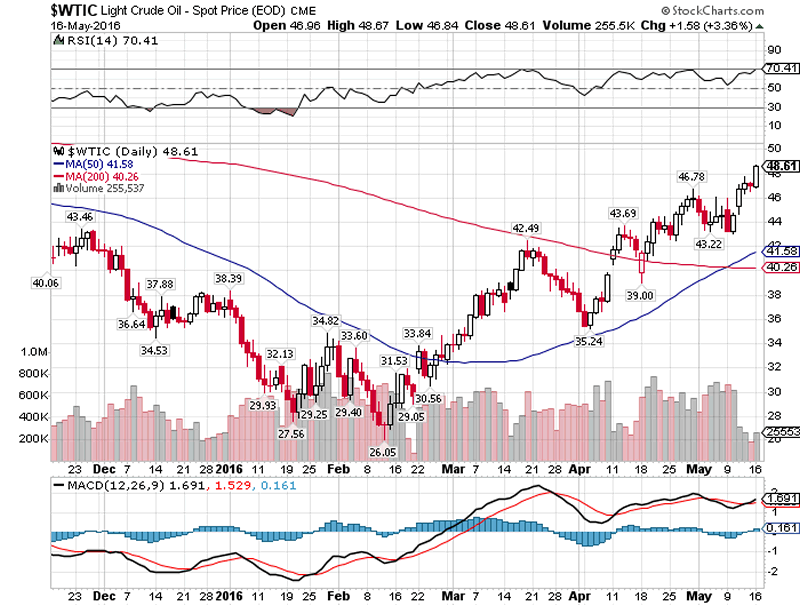 In terms of my oil price forecast for 2016, my in-depth analysis of Mid January forecast expectations for the crude oil price to bottom by early February at approx $25, the actual bottom came in at $26 and within the time window for a final bear market bottom as the following video analysis and article excerpt illustrate.

My forecast conclusion is for the crude oil price to trade within three distinct trading ranges for 2016 of $20 to $40, $35 to $50 and $62 to $40. Furthermore the trend pattern imposed onto the trading ranges implies that a bottom is likely by early February 2016 at around $25, followed by a trend higher into Mid year towards $50, a correction into September, followed by a trend towards $62 before succumbing to a correction during December to target an end year price of approx $48 as illustrated by the following forecast graph.

My latest video analysis seeks to update what has transpired since, and whether the crude oil price remains on track to to continue trending towards $60 before the end of this year, and what this means for the stock market that I have consistently stated should track the crude oil price rally higher, whilst many if not most have long since convinced themselves that stocks were not only in a bear market but that a crash was always liniment! So found out the prospects for oil and the stock market in my latest video analysis.