Be Careful Listening To These Top 7 XRP Naysayers

XRP is THE most contrarian investing opportunities of this decade is what we said in our XRP forecast for 2020 as well as in our top crypto predictions. Interestingly XRP is also one of the most controversial digital assets when you look at the emotions they trigger. We have selected the top 7 list of ‘xrp naysayers’, and highlight the reason they are so ’emotional’. This article is *not* about the people nor their thinking, it really is only about the topic of ’emotions’ and why investors have to be extremely careful with emotionally driven statements and viewpoints.

He became very well known with this anti-XRP tweets and interviews. His viewpoint is very emotionally loaded, and it’s based on XRP supply reports as well as how Ripple (the company) manages its XRP holdings.

Recently his stance against Ripple became more ‘friendly’, but still this type of quote illustrates the underlying emotion(s):

I still think that Ripple could end up doing very well if the banks take the bait and are offered sweetheart deals to buy some of these assets for pennies on the dollar, 50 cents on the dollar in return for actually partnering very publicly with Ripple. So, it’s like fake-it-until-you-make-it coin.

His personal benefit? Selling his own reports and acquiring followers on Twitter, pretty obvious.

If you take your time investigate his background you see he is a ‘Bitcoin maximalist.’ In other words only Bitcoin is good because it’s good, and all the rest is not good.

Not so long ago Max Keiser once again shared his thoughts with Bitcoinist on the latest happenings in France, how Russia may use Bitcoin for its strategic reserves, and why Bitcoin is king while altcoins should be “left to dickheads like Jamie Dimon.”

The learning here is to watch out with these black-and-white statements. Yes as per Tsaklanos his 1/99 Investing Principles some 99% of cryptocurrencies do not create (economic and user) added value on this planet, but be careful ignoring the 1% that create superb value.

Mr. Bradley Sostack made fame by his lawsuit against Ripple.

His viewpoint is that XRP is an ‘unregistered security’. Obviously he looks to be indemnified through the Court because he bought some XRP many years ago.

The learning here is the personal benefit of a person as the main driver for negative statements and viewpoints.

Then there is a new member in the top XRP naysayers: billionaire Mike Novogratz.

Well, what we should we say? There is only negativity coming out of this Twitter stream on anything that is not Bitcoin.

Anyone can fill in the learnings and warnings here.

We want to use this case as an illustration for many others with a same mindset. It’s nothing against this person, it’s more the type of character you have be careful with.

Verodus on Stocktwits may not be famous, but he was brave enough to make fun with our viewpoint.

As we are fully transparent over here at InvestingHaven we include the Stocktwits message on our November XRP article featuring XRP adoption based on factual data points. 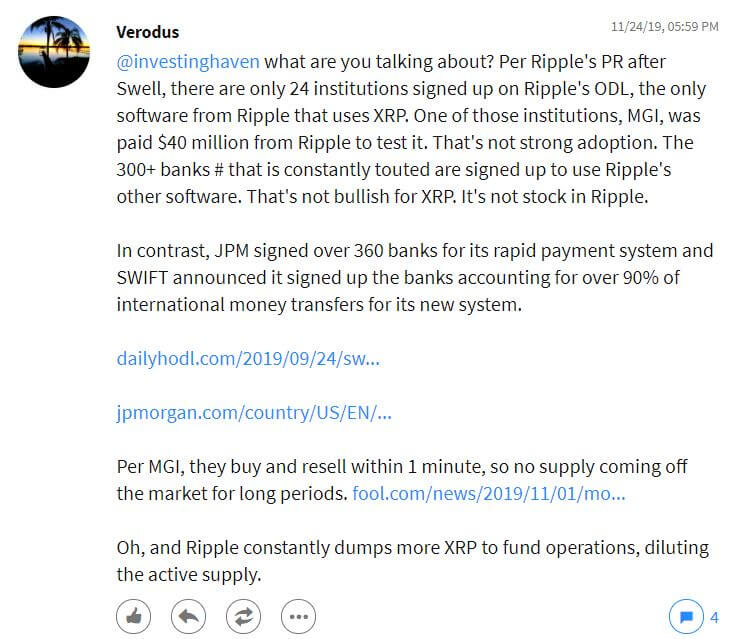 The learning? Watch out if people use ‘sources’ like dailyholdl.com, fool.com, and other sites that live to sell banner ads. As per Tsaklanos his 1/99 Investing Principles it is 99% of this online materials that have zero investor value.

Mike Novogratz, the CEO of crypto investment firm Galaxy Digital holds a place in the top list as well.

Ripple is Galaxy Digital’s biggest investment. The firm has invested a total of $23.8 million in the San Francisco startup.

Go figure, we don’t know what to make out of this.

Is it called Ripple, XRP, or dogshit? Who knows, who cares. It’s worth more than zero so it’s time to trade the USD pair on his exchange.

The learning? Pretty obvious, his exchange launched a synthetic product to short XRP with up to 50x leverage. He obviously sees so many XRP haters, and hopes there is a market for his product. Be careful with emotionally driven trades, for sure with leverage, 99% chance you will be the loser!

With this last XRP naysayer, and the learning/warning, we come to some conclusions. We believe there are 3 messages left to share with our followers.

First, factually, XRP is the most promising digital asset when it comes to economic value and utility, far outpacing any other cryptocurrency. That’s not us saying this, not us thinking this, not us hoping this, not our imagination talking. It really is the facts and the figures.

We collected data points, and we urge people to verify this themselves. Now THAT is the right answer to any naysayer, far beyond XRP.

XRP 100-Fold Rise Underway? Ignore These ‘Through The Roof’ Signals ‘At Your Own Peril’

Second, Ripple was able to attracting most investor interest in 2019. CB Insights reports that dollar funding last year is down nearly 30% from the 2018 high of $4.3 billion. Ripple outperformed other fintech companies in terms of investment dollars with a $200 million in Series C funding. The blockchain lending firm Figure Technologies came in at number two on the list, raising $103 million, followed by the Bitcoin mining startup Layer1, which raised $50 million.

This must mean something, right? And it’s not emotions, but the facts and figures that talk now.

Third, and last, is a tip we share with our followers: watch out for a short squeeze.

Case in point: Tesla was one of the most heavily shorted stocks in 2019 right at a time when Tesla had a phenomenal product and outlook. This is what happened: 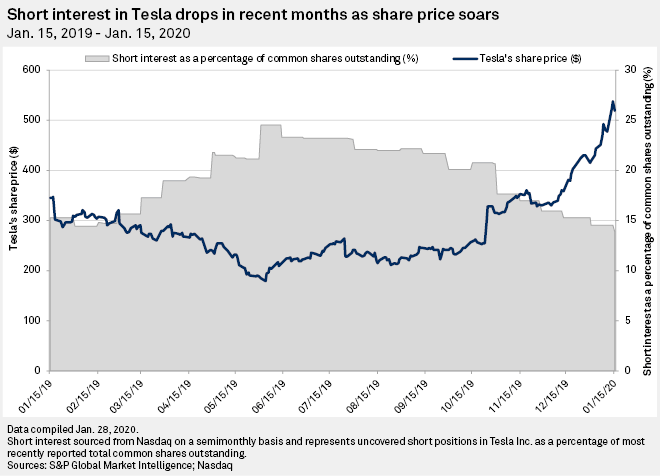 Don’t go against a fundamentally sound product, is the learning, especially not if the consensus trade is a short trade.

XRP may have some ‘well known’ naysayers. That’s fine, nothing against the people nor against their ideas. But be careful listening until you know ‘why’ they are so emotional, mostly there is a personal benefit underlying their statements and viewpoints.

Ultimately XRP is the most promising of all cryptocurrencies, and value always trumps emotions in the world of investing. Tesla is a recent illustration of this!