Our XRP price forecast for 2020 is the last addition to our annual global market forecasts. Although we mostly try to forecast a specific price target we will not do so in this XRP price forecast for 2020. We will determine directionally where XRP is going in 2020. For 2021 and beyond we remain firm to our first price target of 4 USD which are former all-time highs, followed by ultimately 20 USD. Impossible? Nothing is impossible. BTC went through a 100-fold increase in 2015-2017. Why would XRP as the most promising cryptocurrency in terms of adoption not be able to rise 20-fold, followed by another 5-fold rise? As said in our 7 Must-Read Cryptocurrency Predictions For 2020 we believe the grand (secular) crypto bull market will continue, and it will be a pre-requisite for XRP to thrive.

[Corona Crash Update posted on April 27th 2020. Please scroll down to find the most up-to-date XRP price chart which we created on April 26th, 2020. This long term chart suggests that the Corona crash did not create damage the long term trend.]

Let’s start with the most important premise of XRP: adoption. That’s what sets it apart from practically any other cryptocurrency out there. We’ll then move to the XRP chart.

Right before 2020 kicked in the world learned about Ripple’s $200M fund raising success. This fresh new capital will be used to accelerate the XRP adoption process.

In an interview with Fortune, CEO Brad Garlinghouse said Ripple currently has more than 300 customers. He expects Ripple’s customer base to grow 30-40% in 2020, and says transaction volume on the company’s network will increase more than 600%. The $200 million investment, which was also backed by SBI and Route 66 Ventures, may help Ripple refute skeptics who say its technology is a solution in search of a problem and question why banks should adopt it.

Moreover, from the same interview with Ripple’s CEO it appears that Ripple is really committed to growing the XRP ecosystem:

As for the new funding round, Garlinghouse cited a high level of investor interest in Ripple, saying the company did not need the money, though the funds will provide “balance sheet flexibility.” A Ripple spokesperson said its plans for next year include hiring up to 150 new employees and adding overseas offices.

One of the most important signs of adoption is the partnership between Ripple and Moneygram, one of the largest money transfer services worldwide. Even CNN featured this, and there is a direct link to the TV interview through this tweet. 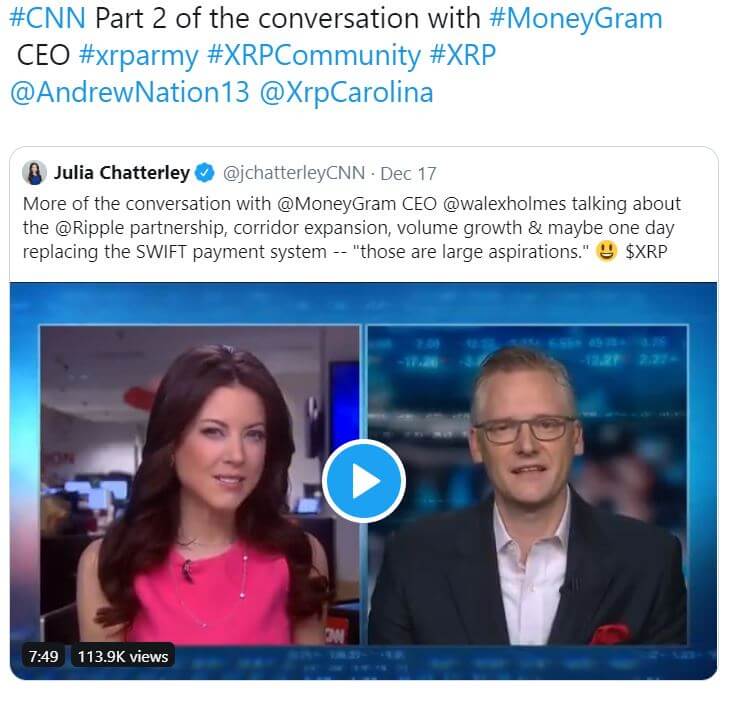 It is clear how fast the volumes are growing that XRP is transferring from one currency into another currency (one source and another source).

From a price perspective the breakdown of XRP was an important event of 2019.

We believe that XRP is setting a giant rounding pattern. A major rounding bottom or ‘saucer base’ in more technical terms. Eventually this will resolve to the upside, and we believe that XRP will set a major bottom in the first half of 2020 before starting its steady rise.

In our cryptocurrency investing premium service we explained in great detail how this formation tends to have a bullish outcome, provided it respects this formation of course. We saw an analogy with the 5 decade long silver price chart. The comparison is striking, not only because the setup is almost identical but also because of the 10x faster factor (the time silver spent to consolidate before bottoming is almost identical as 1/10th of the time XRP doing the same).

Ed. note: This paragraph and below chart is an up-to-date version of the long term XRP price chart. We wrote this update on April 27th, 2020, one month after the depth of the Corona crash.

Surprise surprise, the long term XRP trend is still intact. Even more surprising, it now turned bullish, with another breakout of the 2.5 year falling trend.

Hard to believe but true: XRP is still on track to meet our long term price targets.

The long term XRP chart shows this powerful long term reversal pattern. It is the type of pattern that in one or two years from now everyone will say “I wish I bought XRP below .20 USD, it was so obvious it was a long term reversal.”

The long term reversal pattern of XRP broke out in January and February of 2020. However the Corona crash stopped this breakout, similar to all other uptrends in the crypto market.

As we move to May of 2020 we see a new attempt of XRP to break out. The long term XRP reversal is absolutely gorgeous. The fact that everyone is silent about XRP makes us very excited.

It is clear that XRP is eager to move higher. Once above .20 USD XRP will be in great shape again. The real magic will start once above .25 / .26 USD.

Ed. note: This paragraph and below chart is an up-to-date version of the long term XRP price chart. We wrote this update on August 8th, 2020, four months after the depth of the Corona crash.

This is what we wrote in our piece: XRP: A Strongly Bullish Outcome In 2020 Is What This Pattern Suggests published in December (9 months ago):

Look around you, the number of folks being negative on XRP is growing. That’s what we realized when we wrote this XRP message on Twitter a few days ago: 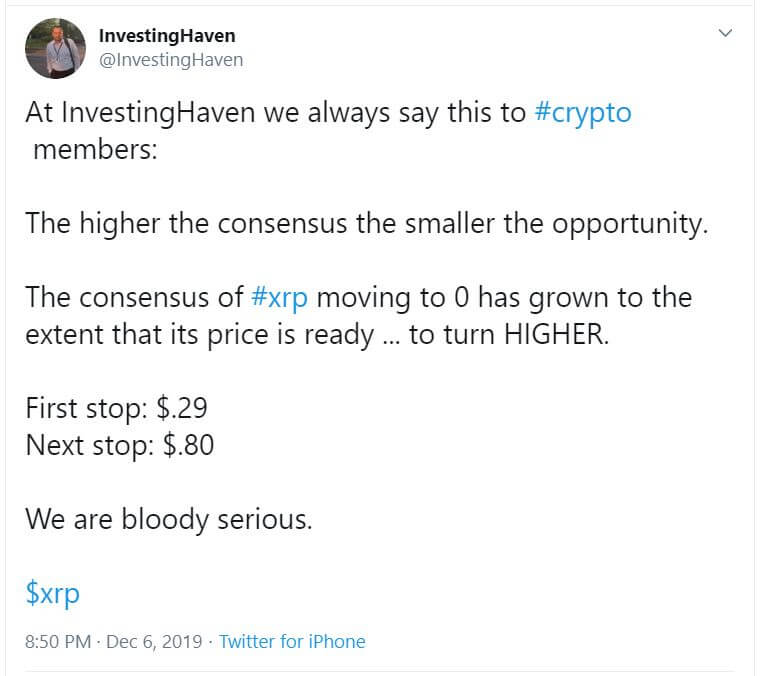 It requires a lot, really a lot of courage and conviction to write this when the entire world goes against your market call.

Again, that message was posted in the public (both Twitter and our own site) some 9 months ago. And we believe that the market went in ‘our’ direction, even though XRP is currently trading around .30 USD.

Based on what evidence are we so ultra-bullish?

Because of the chart setup.

This chart has the key, and it shows this massive powerful reversal setup.

If you cannot ‘see’ the power in this chart, you may need the weekly chart to ‘see’ it.

Below is the longer term chart, updated on August 8th, 2020.

We added the reversal annotation ourselves, and it is clear from this chart how the reversal (shown on the previous chart) ‘relates’ to the overall setup of XRP.

Massive, powerful, and very intense, is how we would characterize this.

The best is yet to come, and we would qualify XRP as THE most profitable investment of this decade.

Why Our XRP Price Forecast Beyond 2020 Remains Bullish

Adoption is what we believe will be the game changer. Forecasting when exactly increased demand for XRP as a results of adoption will kick in is an impossible task.

That’s why XRP holds should be in this game for the long run.

But then how exactly do these adoption effects works, and why do we remain so bullish amid an XRP breakdown at the start of 2020?

Shout out to Chris Smith on Medium.com who published this picture which is exactly what we were looking for: network effects! Mind the difference between the ‘right path’ (black lines) vs. the pitfall (green lines). 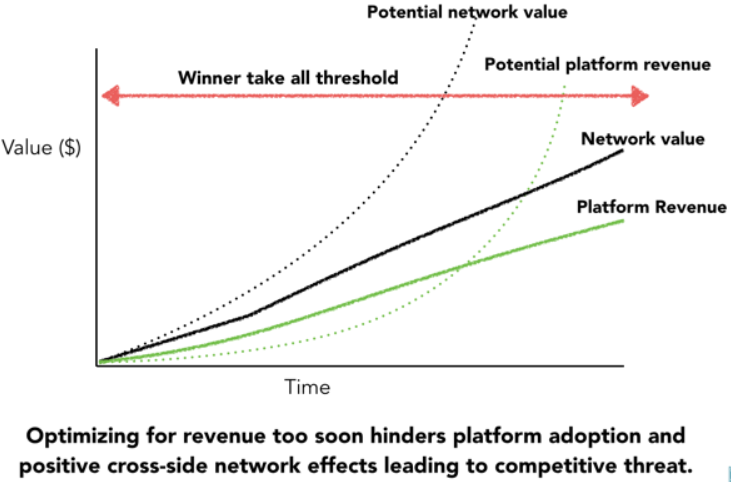 The point about network effects is that they build up slowly, but accelerate very fast in a very short period of time.

The data points we see on how fast XRP is adopted for instance in the USD to Mexican Peso corridor is a proof of this, according to us.

What plays a critical role here is that Ripple probably is not short on capital. This sets Ripple apart from almost any other startup. Their growth path suggests they will not make the mistake of being on the green path on the chart above, most likely they will remain on the black line. Note: the black line is the right path to achieve network effects.

Network Effects As A Catalyst For Our XRP Price Forecast

The network effect is one major underlying force at work but we see 3 more fundamental catalysts underpinning our long term XRP price forecast  beyond 2020.

Our longstanding price target of 20 USD is still valid. XRP will not trade at 20 USD in 2020 obviously, that’s a bit too ambitious, but it will set the stage in 2020 for an accelerated rise later down the road.

The first step is for XRP to respect this giant rounding formation. As long as XRP continues to move in this pattern and as long as the long term crypto bull market (driven by BTC) will continue it will lead bring XRP sooner or later back to all time highs.

That will set the stage for a break to new highs which will bring the long standing 20 USD price target front stage. That will be the time when XRP will have such a massive adoption that huge demand for XRP will drive its price. That’s not for 2020 but we should see the signs of our forecast in 2020 though.

Ed. note: The next paragraph was added on April 27th, 2020, one month after the depth of the Corona crash.

Yes we continue to firmly believe in a strongly bullish outcome for XRP. The Corona crash did slow down the recovery of XRP, but it did not invalidate it. How can we know for sure? The chart below is a close up, and an up to date version, of the chart shown above. It’s the long term xrp chart which shows the breakout of XRP above the falling 2.5 year trend, after XRP peaked in December of 2017.  We believe that the Corona crash lows will be the lows of a giant reversal, with a lower high that will be set later this year (around 0.20-0.21) which will mark the end of the bear market and the start of a giant rally in 2021.

The Biggest Contrarian Call For 2020 And Beyond

XRP is THE most promising cryptocurrency in terms of ADOPTION. Ripple’s announcement raising $200M to accelerate XRP adoption in their XRP ecosystem is the ultimate proof of this.

XRP will go lower until weak crypto investor hands have sold, after which smart crypto investors take over control. That’s why there are 2 outcomes in 2020 which we believe will follow each other sequentially:

It is clear from this situation that XRP is now THE #1 contrarian play, not only in crypto’s investing world but in any market in 2020 globally.

We remain firm on our XRP #1 position, and it’s a matter of time, but our timeline for our longstanding price target is visibly delayed. It is what it is, but no reason whatsoever to change our mind nor our positions.

Stay tuned, and keep following our work to get updates on XRP and the crypto market. We strongly recommend to sign up to our premium crypto investing service (detailed actionable real-time insights).