A Stock Market Crash In 2019 Brewing?

by Ralf Lai
in Markets & Stocks
0

As a reference, though, this is not a great setup certainly knowing that the worst December was in 1931 at the panic stages of the Great Depression stock market crash!

The Dow and S&P 500 closed Monday down 7.6 percent and 7.8 percent this month, respectively. 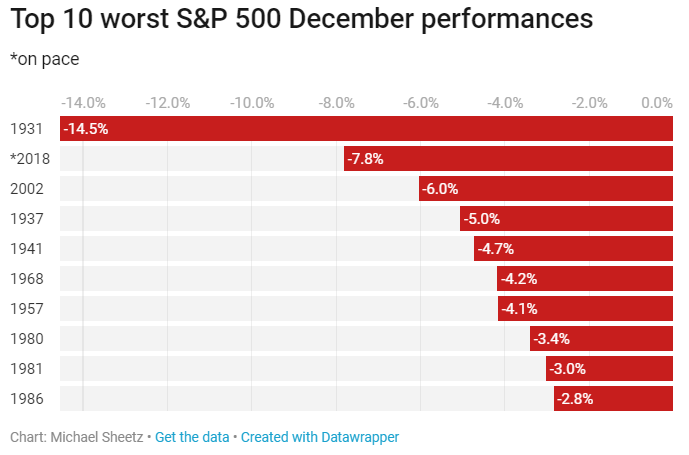 December is typically a very positive month for markets. The Dow has only fallen during 25 Decembers going back to 1931. The S&P 500 averages a 1.6 percent gain for December, making it typically the best month for the market, according to the Stock Trader’s Almanac.

So is this a precursor for a stock market crash in 2019?

Not that fast, there is more data we need to look into, primarily (leading) indicators for the stock market. We see a couple of bearish indicators and some that are not-that-bearish at this point in time.

Eventually, as 2019 kicked off, it became clear that last year’s December delivered the worst returns in 10 years, not in history as was forecasted by some throughout that month.

[Ed. note: This section is added in Feb 2019, exactly 2 months after this ‘stock market crash 2019’ post was originally published.]

We include the Fear & Greed indicator published by CNN Money.

As seen, at the time of writing this indicator bottomed. This article was published really at the bottom in Dec 2018.

One could make the point that this indicator was in ‘stock market crash’ territory when this post was originally published!

[Ed. note: This section is added in Feb 2019, exactly 2 months after this ‘stock market crash 2019’ post was originally published.]

We follow up in this section on how bad financial media was in calling for a stock market crash in 2019. There are 7 articles that are worth looking into:

All in all it is clear how financial media just go with the flow. They just add to the ‘stock market crash’ theme that people have in their mind. It’s what people almost ‘want’ to hear.

Bearish Indicators Supportive of a Stock Market Crash in 2019

This section discusses several stock market indicators which do not look very constructive. They would support the thesis of a stock market crash in 2019.

Almost 11 months ago we were nervous about a crack in the equities market using the correlation of the ITB ETF with the Home Construction ETF chart, as readers can see in this article.

In updating the chart it is clear that the initial target was spot-on where price lingered for a few weeks at the median line. However, support broke. If the home construction price continues to drop further to ~21.5 (orange band which is an important dual horizontal and channel support) it will be first evidence that equities market could indeed decline further.

Downward momentum has a larger probability than a surprise rebound according to us.

Early August we started to get concerned again 2 months ahead of the October crash when we had the First Trust DJ Internet index (FDN) chart screaming of another more severe crack compared to the one in February. What happened after requires no comment.

The internet stock index went higher and higher while we told our premium members to unload technologies stocks rather than buying more.

Tech stocks could lead the market to go down even further. The median line of monthly FDN chart will be a temporary resting place around 95 – 100, failure to hold could see price roll all the way to channel support.

Third, the commodities index CRB signaled a warning when price failed to break above the do-or-die psychological resistance level of 204-205. Not only did it get rejected price now looks poised to break below the bear flag.

There is one joker at play here: the bear flag may also be a series of higher lows. If that’s the case this indicator would not be supportive of a stock market crash in 2019. Time will tell.

Fourth, the TIP/TLT ratio which we consider an inflation/deflation indicator has exerted a deflationary or non-economical growth scenario. Its chart has now a last line of defense at the blue downtrend line. Any break below the current area could be bearish for the global economy.

Fifth, more evidence can be found from the monthly chart of HYG which shows that price broke down of an uptrend line support (although the December candle is not completed yet).

This bearish indicator is not sufficient to forecast a stock market crash in 2019. Moreover, one month does not make a market, and 3 consecutive monthly closes are the ultimate confirmation to qualify as bearish!

What would be alarming is any break below the 76 support zone in the above chart.

Sixth, the daily crude oil chart shows a dual support at stake. Failure to hold will send stock market nosedive much quicker or lower down.

Neutral Indicators Not Supportive of a Stock Market Crash in 2019

This section discusses several stock market indicators which do look much more constructive. They certainly do not support the thesis of a stock market crash in 2019. More specifically, the following 4 indicators have a setup that does not justify panic.

The Dow Jones Industrial Index DJI is at almost near to the uptrend line from the 2008 recovery. As long as no major breakdown of the uptrend line, there is still a bullish fighting case as for one more quarter.

Courtesy of Carl Swenlin’s chart the S&P 500 bullish percentage has hit the previous oversold zone which could signal a rebound soon. 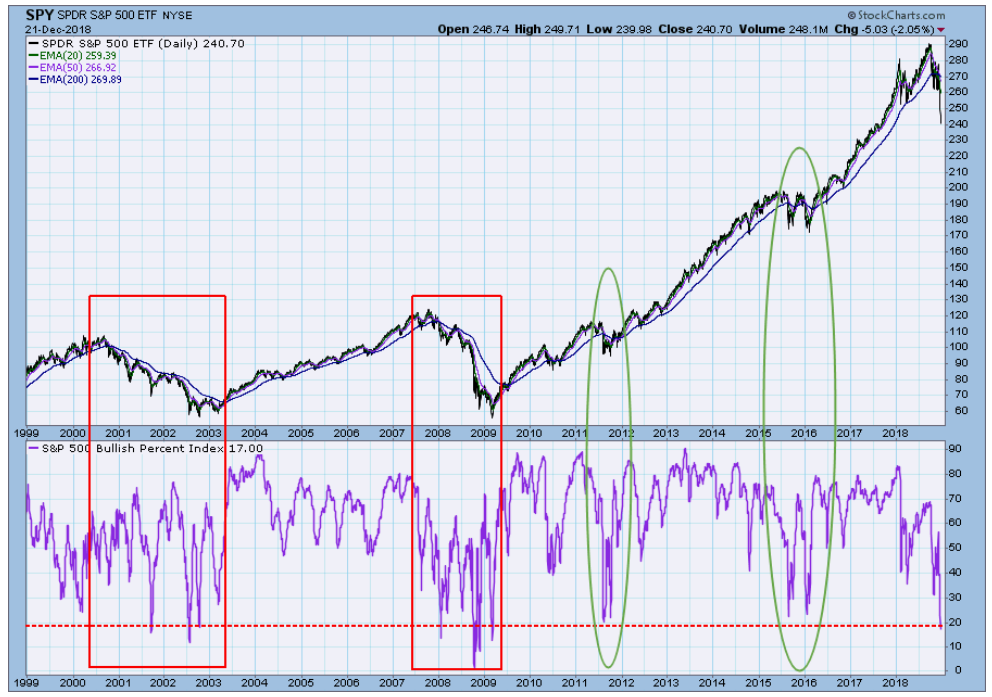 The ratio weekly chart of SPY/TLT shows that uptrend line is not broken down yet, albeit there could be a few more weeks of fear. Until the uptrend line is broken, InvestingHaven’s team is not totally convinced.

The global index ETF tracker ACWI has a massive breakout above the all-time resistance in April 2017. Technically, this zone needs to be confirmed with a test to confirm that it is a support. Any break below this zone will add evidence to the sustained bearish case.

The weekly XLY/XLP ratio still shows healthy uptrend but currently engage in retracement. However, below the blue zone a strong bear market might be confirmed.