A Fission Uranium Stock Forecast For 2019

Fission Uranium, an unknown uranium exploration company, shows one of the most powerful setups on its stock chart. We believe this is a pressure cooker ready to explode. That’s why we have a bullish Fission Uranium stock forecast for 2019.

Fission Uranium Corp, stock symbol FCU.TO trading on the Toronto stock exchange, has a $354 market cap at the time of writing. It is focused on exploration of uranium. As per Wikipedia its sole project is the Patterson Lake South (PLS) Project located in Canada’s Athabasca Basin District.

30 countries are considering, planning or starting nuclear power programmes, and a further 20 or so countries have at some point expressed an interest. Despite the large number of these emerging countries, they are not expected to contribute very much to the expansion of nuclear capacity in the foreseeable future – the main growth will come in countries where the technology is already well established. However, in the longer term, the trend to urbanisation in less-developed countries will greatly increase the demand for electricity, and especially that supplied by base-load plants such as nuclear. The pattern of energy demand in these countries will become more like that of Europe, North America and Japan.

It may not feel that way but the world is turning to nuclear power for lower cost and cleaner electricity production.

Provided that the mistakes from the past which led to epic catastrophes like the Japanese nuclear disaster of 2011 will be taken into account it might turn out well for the world.

Moreover, there is seasonal strength coming up. The period November till February is typically the strongest period of the year. Uranium stocks represented by the URA ETF tend to rise in that timeframe with a +80% probability that December will close higher than it starts trading. 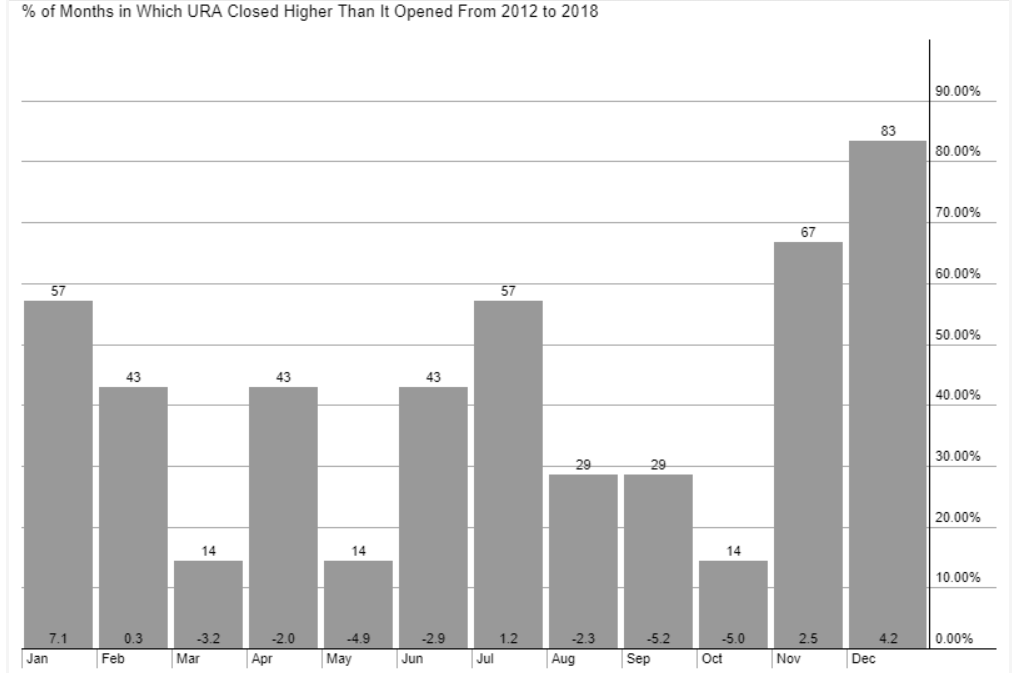 As per their September 25th news update Fission Uranium has better than expected drilling results.

On the one hand the company announced results that, in some instances, exceeded their expectations:

The goal of the summer 2018 program was to drill key areas of the R780E zone high-grade that are presently classified as “inferred” and convert them to “indicated”.  To that extent, the 9 drill holes intersected width and strength of mineralization where expected and, in some cases, results were greater than expected. The results of the summer 2018 drill program will be included in a new resource estimate that will be used for the upcoming pre-feasibility (“PFS”) study. The Company expects to release the PFS study in Q4, 2018.

On the other hand they confirmed that they have satisfactory results to proceed to their pre-feasibility study which is where the real confirmation will take place.

These final assays from summer drilling on the R780E zone include a number of very robust intercepts and have the potential to increase the indicated category of a revised resource estimate that will be used for the resource model in our upcoming pre-feasibility study. The width and grades we have encountered this summer are a reminder of the high quality of mineralization contained within the Triple R deposit, which remains open in multiple directions.

Last but not least let’s revise the stock chart of Fission Uranium. We use the monthly chart for that purpose.

The chart below shows an incredibly powerful setup: a giant triangle pattern with higher lows. This pattern is in the making for 10 years now. The longer the pattern the stronger the reaction afterwards.

This triangle setup has a bullish bias. In other words this pattern tends to resolve to the upside.

Where does all this leave us with our Fission Uranium stock forecast for 2019?

Both fundamentals of the company combined with the giant rounding bottom in the uranium spot price have a bullish bias. As seasonal effects support higher prices in the weeks and ahead it is likely to push Fission Uranium higher, outside of its giant triangle pattern. In chart terms, the stock will break out.

The bullish aspect of this is that a 10 pct increase, which is nothing for a highly volatile stock in a sector like uranium will create a breakout. That’s why we tend to use the analogy of a pressure cooker.

If the break out takes place still this year there is plenty of time to move higher in this November-February timeframe. This will likely bring Fission Uranium to the $1.35 area in the first month(s) of 2019.

This is what we said 3 months ago: “Fission Uranium is a pressure cooker ready to explode. There is +80% probability that seasonal momentum will push uranium stocks higher in the October to March time period. Any push higher from here will mark a secular breakout with a price target of $1.35.”

With global stock market turmoil the opposite happened: a breakdown from this giant triangle formation.

However, we do not see meaningful breakdowns on the leading uranium stock charts. That’s why we believe that an invalidation of this breakdown is possible, but only provided that stock markets stabilize and the uranium stock sectors gets a serious bid. So that’s two conditions combined before Fission Uranium stock being back on track to meet our forecast for 2019.

This is the up-to-date chart of this stock as 2019 kicks off: