The silver price smash from Sunday night 08.08.2021 left some interesting traces both on the chart as in the futures market positions. We wrote about it in our silver post last week Silver: A ‘Mysterious’ Rise In Open Interest Right After The Flash Crash From Sunday 08/08. Today, we’ll take a look at the silver price chart and compare it with the insights from the latest silver CoT report.

The silver price is looking for support on its chart. At this very point in time the chart does not look constructive in the short term, but is still bullish long term as it is respecting key support levels.

Provided that silver respects key levels, particularly the lows of this 12 month consolidation, the market should give us an important insight on August 31st: did silver print another bottom near 23 USD/oz? If so we can reasonably expect price to move up in the next 3 month cycle.

How does this price related insight relate to one of the drivers of silver’s price: the futures market positions?

Our followers do know by now that we look at net positions in the silver market, and that we use the CoT as some sort of stretch indicator. Once commercials (red bars on the 2nd pane, below) reach an extreme low net short level, in relative terms, price is reaching a bottom and is about to correct upward. The opposite is true as well.

To illustrate this we did add 4 green shaded areas on below chart. You can see how in the last 3 years price reacted to the upside every time commercials reached extreme low net short levels. Sometimes they added fast, and the rally was capped. Other times it was a slow process of adding net short positions and price was able to rally further.

While we don’t pretend to be experts in the CoT report readings, we know as a fact that Ted Butler is THE expert that understands this matter thoroughly, we do understand the basic dynamics of the price being driven out of the futures market as one of the 3 leading indicators, as per our silver forecasts. 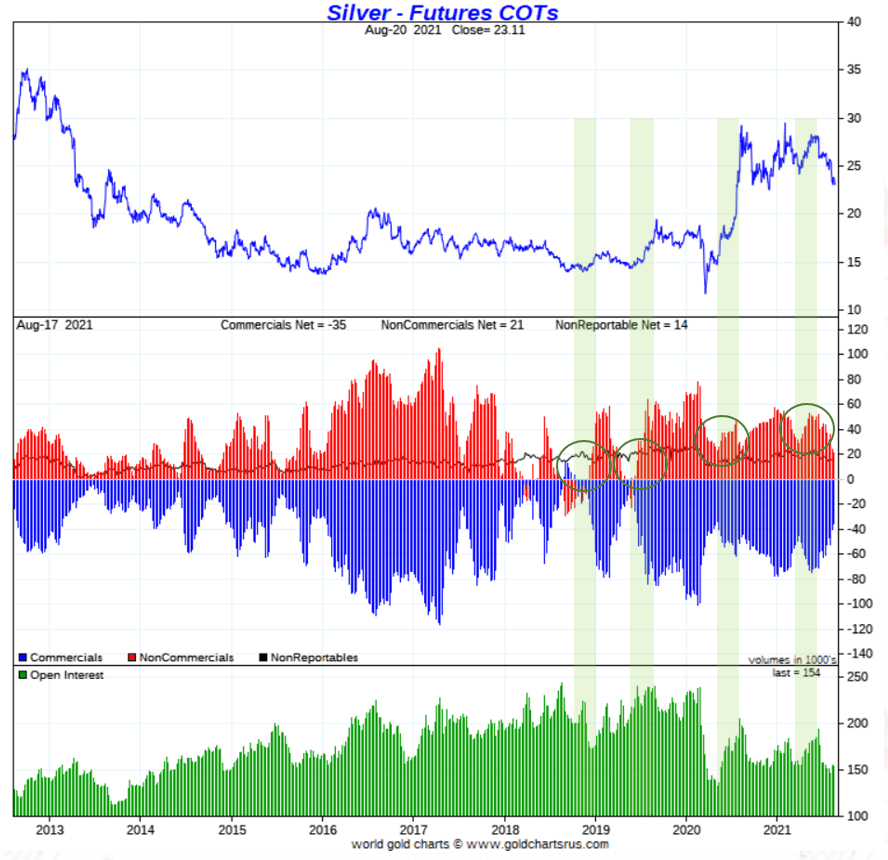 What does the expert, Ted Butler, has to say about all this? He did write a detailed update to its premium members, explaining why he believes that ‘this time will be different’. What he means by this is that commercials will not add (as fast) to their net short positions. Part of his story is reserved for his premium members, but he also published recently some thoughts in the public which we want to share (source: The Bad, The Ugly and The Good):

There’s clearly no question that the price smash has been of clear benefit to the 8 big COMEX gold and silver shorts. Following last week’s price declines, which reduced total losses by $1.6 billion to $9.1 billion; at publication time the losses were further reduced by $500 million to $8.6 billion. This is down from the $10.1 billion loss of the second quarter (June 30) and close to the $8.3 billion loss at the end of the first quarter (March 31). As has occurred in the past, I’ve been asked if the big shorts are in position to eliminate their losses and close out their remaining short positions completely. Simply put, I don’t think so.

Not for a moment would I underestimate the treachery and guile of the COMEX commercial shorts, but […] they are still bounded by the realities that exist. For one thing, please remember that while the big 8’s total losses have been trimmed substantially of late, they are trimming those losses by actually booking realized losses and not the usual profits or break evens at worst they experienced up until June 2019. If the 8 big shorts were as all-powerful as they were prior to two years ago, they wouldn’t be taking actual losses of any magnitude, no less being in the hole for a billion dollars per trader on average.

Plus, the big 8 shorts have lost their main protector and benefactor, JPMorgan, who flew the short coop long ago, leaving the remaining big shorts to flounder in its absence. But more than anything else, the big shorts are bounded by the reality that they need counterparty selling in order for them to completely buy back their entire short positions and it’s hard to see just where that non-commercial selling would come from. I did lay out how it might be possible for the big shorts to buy back a lot more of its concentrated short positions if the managed money traders embarked on an all-out short selling campaign, but that is looking less and less likely.

In fact, the existing and projected market structures in silver and gold already closely resemble how the structures appeared after the epic price smash in March 2020.

According to his analysis there are some fundamental shifts taking place ‘under the hood’. We like this thinking. We do want to stay focused on price, and price only though.

For now we still strongly believe in the long term bullish case of silver, and we will closely watch whether Ted Butler’s theory will be the driver for a fundamental change in the silver market and could drive the secular breakout we are anticipating since a long time.

The Only Commodity Not Impacted In 2022, Currently Right Below ATH

Will Bitcoin Move Back To 30k?