One of the nano cap stocks we have covered frequently is Lingo Media. The company offers English online courses, in e-learning format, and is focused on non-English speaking countries. Its target market is huge, as Latin American and Asian countries have a growing need to improve English in order to compete in the global market.

As 2015 kicked off, Lingo Media’s stock price started rising sharply, and it peaked right before the summer of 2016. Its stock price went up tenfold, so it became a 10-bagger in less than 16 months.

InvestingHaven likes the story of the company. It is strong, it meets a real need and solves a real life problem, its market potential is huge, and its technology is robust. Moreover, according to the company itself, it is developing “the largest digital English learning library in the world.”

This week, Lingo Media, trading on the TSX Ventures stock exchange, published a financial update in a presentation format, which can be downloaded on Lingo Media’s investor site. Below are the financial highlights.

The financials for the period ended September 30, 2016:

Presumably, the market started selling the stock as of mid-2016 because of revenue. However, when comparing the revenue evolution (chart below) with the fundamental data of the company (see above) we see a divergence. Fundamentals are strong but revenue has peaked in 2015. 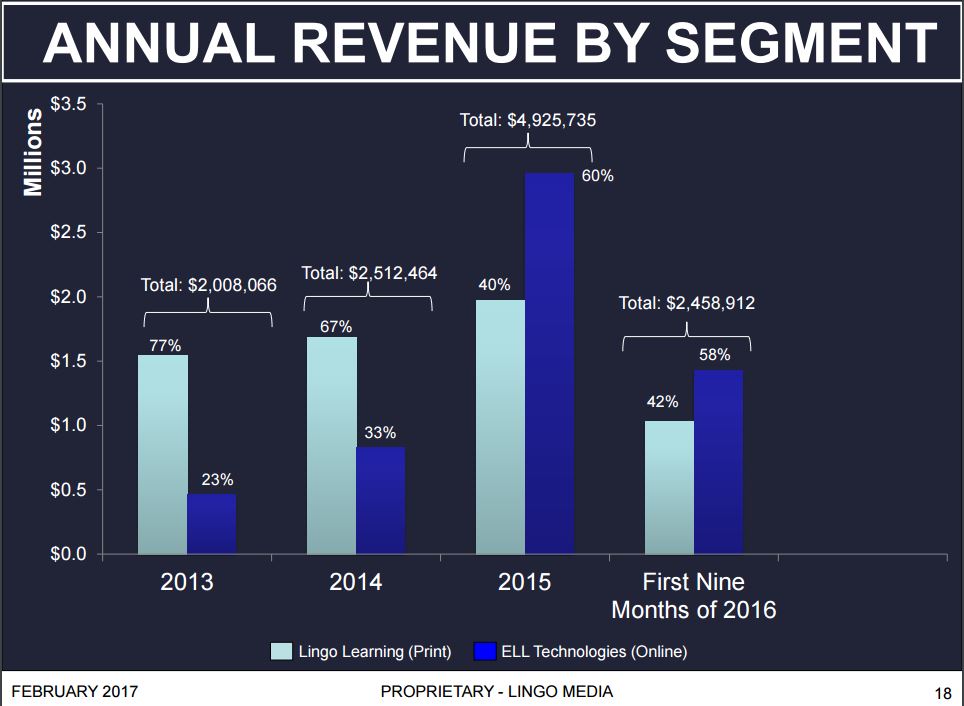 We believe Lingo Media should focus again on revenue growth. If it does it well, the stock price should follow suit, as both the outlook of the company and fundamentals are strong.

For now, it seems that Lingo Media’s stock price has bottomed, after a period of capitulation. The chart shows a gap between $0.20 and $0.40, one that can be easily and quickly filled. The stock can become a multi-bagger, and challenge its previous highs, if it can show revenue growth to its investors.