The most recent XRP Markets Report for Q3/2019 is out, and there were a few irregular items that caught our attention. One was the significant drop in XRP sales by Ripple for which we try to understand if this is concerning or not. Second is the formal answer by Ripple on the allegations especially in Twitter which we know many of our followers find concerning. Third is a great sign of traction, and according to our theory means ADOPTION in XRP which is the most important driver for higher value of XRP and similarly any cryptocurrency. No forecasts in this article, just facts and figures about the XRP market.

Let’s start with the quarterly sales.

Ripple changed it measurement method. It moved away from CoinMarketCap, and moved to CryptoCompare Top Tier. Moreover, it reduced its XRP sales in Q3 drastically compared to Q2 report. Ripple did this on purpose.

For Q3 19, our total XRP sales were $66.24 million vs. $251.51 million in the previous quarter. Per the Q2 report, our stated goal for programmatic sales for Q3 was approximately 10 basis points of the new volume benchmark (CCTT), and we ended sales for the quarter below that, at 8.8 bps. In fact, part way through Q3, we decided to pause programmatic sales altogether, and focus our over-the-counter sales on a few strategic partners, who are building XRP utility and liquidity in regions that are strategically important to our growing global business, including EMEA and Asia. Total sales including OTC and programmatic ended the quarter at 36 bps of CCTT.

So in other words Ripple is on purpose reducing programmatic sales, which they did drastically, in order to focus more on selling XRP ‘over-the-counter’ with strategic partners. 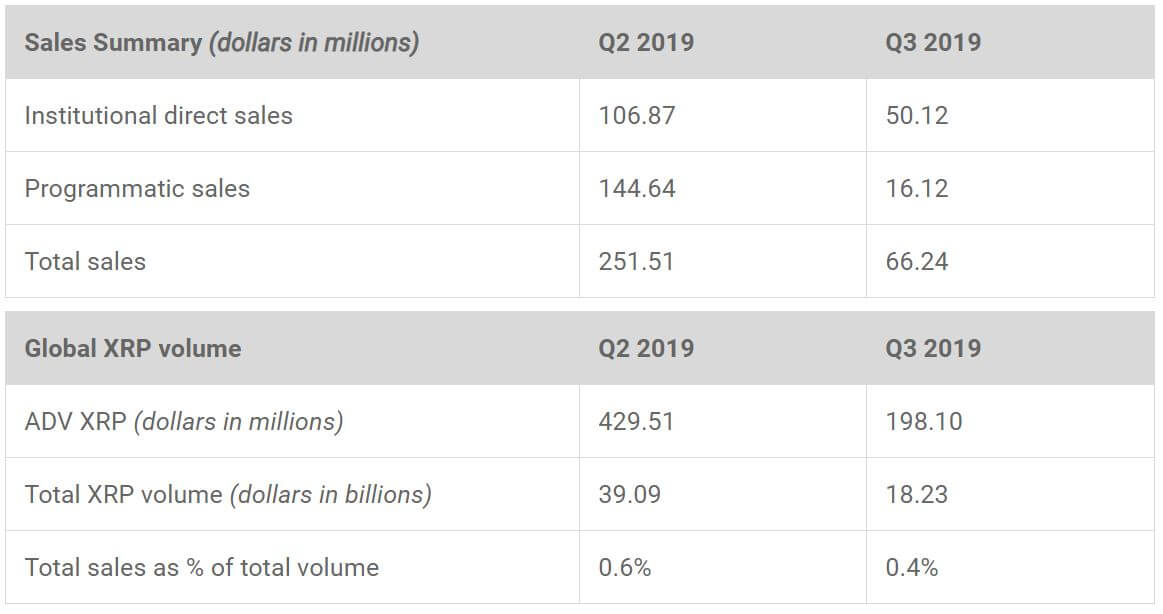 Take-away #1: This makes sense, and we don’t see a reason for concern here, on the contrary. If Ripple is not selling some of their XRP, they are holding it. That’s less supply in the market, and the demand that otherwise would have bought from Ripple does have to look for other sellers to get their XRP. No concern, nothing wrong.

It is known that Twitter has lots of allegations against Ripple and XRP.

Over here at InvestingHaven we often get concerning messages from readers pointing out that this bad practice, not good for XRP, and so on and so forth. We have always been laughing with this, because the more of these allegations in the Twitter narrow crypto communities the more we like this. That’s because XRP fundamentals are amazing. And bad news for amazing opportunities mean one thing: more buyers in the future once prices start rising.

Looked at this differently: the more obvious an opportunity becomes the lower its upside potential.

Ripple did officially address the FUD and allegations, and this is what they published in their report.

Take-away #2: This makes tons of sense to us. The bots are coming from a minority of people that have their own agenda. Whatever they say it has no meaning. We back up the truths that Ripple defined in their report, and urge our readers to read this a few times. This point as well is good news, not concerning whatsoever.

XRP is ideally suited for global payments because it is faster, less costly and far more scalable than other digital assets.

Ripple customers live with ODL, including MoneyGram and others, increased by 75% last quarter and dollar volume on ODL increased more than five times from Q2 to Q3. In addition, Ripple announced its acquisition of team Algrim to support the ongoing development of ODL. To keep up with strong customer demand, Ripple is rapidly expanding its team on a global scale—Iceland will serve as one of Ripple’s engineering hubs with plans to bring on more technical talent in Europe.

Take-away #3: This likely is by far the best news, and exactly the type of news we are looking for. As per our cryptocurrency investing method we look for cryptocurrencies that show signs of ADOPTION. We are not interested in anything else, not in tweets nor in good news show. All that matters going forward is ADOPTION. There is only a handful of cryptos that can show this, and XRP is clearly one of them. Arguably XRP is the winner in terms of ADOPTION. The most recent data points from the XRP Markets Report prove this out.

We consider the Q3 report a very insightful report even though it requires a bit of thinking in order to grasp some disruptive changes like the sales drop.

The ADOPTION data points are outstanding, and exactly what XRP investors need to confirm their bullish long term investing thesis.

Ripple is doing a great job bringing in truthful answers to the childish practices on twitter.

All in all a report to read a few times in order to understand its underlying messages.