Experts were telling you for months that tech stocks would drive markets 20% lower. They said they saw similarities between 2008 and 2022. We did the analysis in our premium service, in detail, in Must-See Charts: 7 Timing Conclusions, 2008 Comparisons, we could not see this similarity, it was a narrative and not a fact based conclusion nor prediction. We have been talking about an epic sector rotation for months. Based on our 2023 forecasts which appeared even in the public domain we concluded that tech stocks would recover and take over leadership. We see the first signs of this prediction coming to life now.

We have warned many times that narratives create bias which is the basis for damage. In fact, it is one of our 7 Secrets of Successful Investing.

Astute readers will remember our market call which we published the exact same moment when the ‘entire investor community’ was thinking that an epic breakdown started, on October 13th: The Market Will Not Move 50% Lower Contrary To What The Gurus Are Telling You.

The narrative that sold easily was the bearish narrative. From a psychological perspective, it makes so much sense that this bearish narrative sells easily simply because the most recent emotion in investors’ mindset is fear and uncertainty.

Remember, the inner system of humans remembers most vividly what happened in the most recent past. It associates that particular emotion with the current environment.

One really important success factor for investors to master is to become emotionless, sort of detached. Not easy, though.

That said, let’s look at what the data is telling us as opposed to listening emotions like fear and uncertainty.

If we zoom into the same chart with the same chart patterns we can see what this violent test of support looks like. Since October, tech stocks fell below their rising trendline but they always recovered with 3 to 5 days.

From a very different perspective, we noticed that tech stocks took over leadership relative to the other key S&P 500 sectors. XLK ETF was the strongest sector on Friday January 20th. 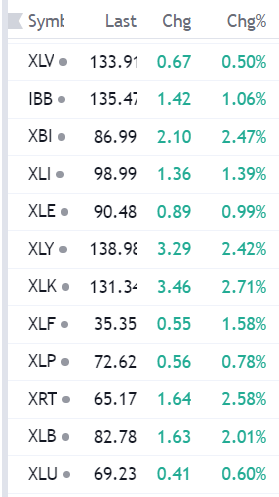 Similarly, on Wednesday January 18th, a day dominated by selling, XLK ETF was the sector with lowest selling pressure among all sectors. 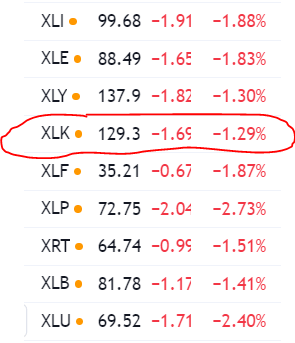 In our stock market investing service Momentum Investing we took positions in several tech stocks, several weeks ago. Our tech stock selection revealed several gems, some of them hidden gems.

WARNING: InvestingHaven.com, our site, is not affiliated and has no connection whatsoever with Invest Haven Group on Invest-Haven.com or Investing-Haven.com. InvestingHaven.com did not have and will never have sales reps. Do not accept financial offers, certainly not by telephone, this is why >>