The Nasdaq Is Writing History, Again

Once again, the Nasdaq is writing history. It has probably the largest number of ‘haters’ but that’s the besides the point. It completed the longest correction since the Financial Crisis, almost as long as the 2018 correction.

By historic standards, the Nasdaq is completing the longest and most violent corrections in decades. This data point is self-explanatory (courtesy of Bespoke Investment). 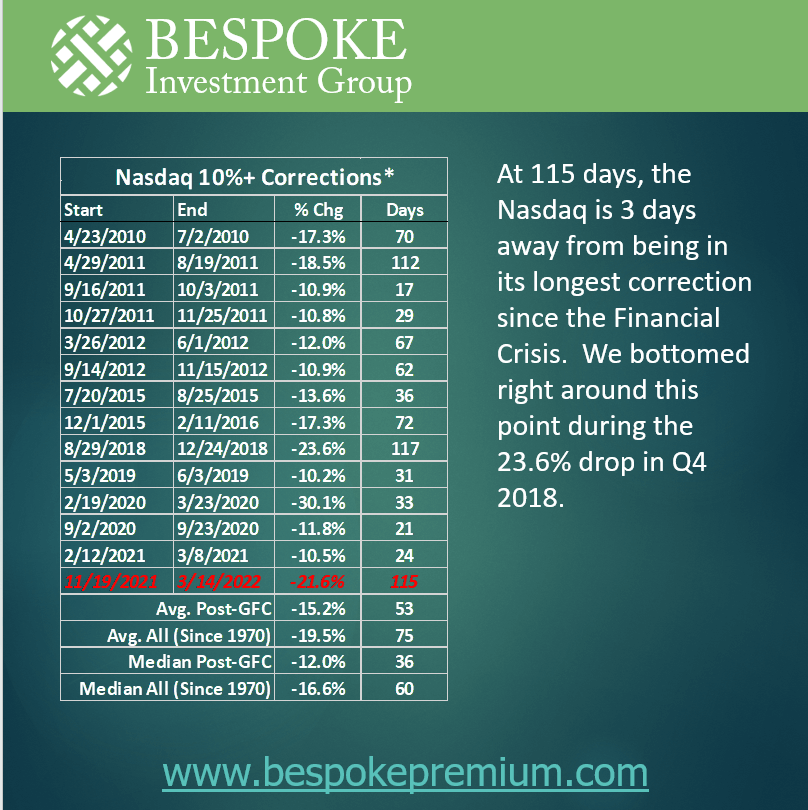 Let’s play it back so readers can see what a super bullish and super bearish setup looks like.

This is how it started, back in November. That’s a chart that probably makes you ‘feel good’, right?

Early January marks the 3 test of support, with a breakdown attempt.

Mid-February, after the breakdown reached a first local bottom, we could think that some sort of W reversal was in the making.

The potential W reversal did not hold, it became a lower low. It’s a this point that the downtrend looks ugly, and it is the exact opposite of November: ‘feel bad’.

Last week, it became clear that the end of February lows were holding. This could become the start of a W reversal.

On Friday, the Nasdaq finally succeeded in breaking above the downtrend channel.

The moral of the story: when a market looks really good and makes you feel good, it might be the end of an uptrend. The opposite is true as well: when you really think that an apocalyptic scenario is about to unfold, it might be a bullish turning point.

Many tech stocks will need a lot of time to recover as the damage has been enormous. However, a select few sectors look really good. In our Momentum Investing portfolio we opened a position in a very promising tech stock which has amazing fundamentals and financials. Moreover, in our automated trading services in which we trade the S&P 500 for our members we have accumulated several profits which largely outweigh the few losses in recent months, largely outperforming our peers and indexes.