Why Investors Have Such A ‘Fear Of All-Time Highs’

Several stock market indexes set new all-time highs in recent weeks. Interestingly, the fear and greed index published by CNN is nowhere near any extreme. Even more interesting is that this index printed sentiment of fear just one month ago when the S&P 500 was trading 2% lower. Very odd, and we presented our viewpoint in our Trade Alerts weekend digest sent to premium members.

One month ago, as seen below, the index showed ‘fear’ readings. That’s when the S&P 500 was trading at 4409 (open price of August 4th). One would wonder where all this fear and doubt is coming from, and the obvious answer is ‘fear of ATH’. While everyone talks about FOMO, we believe FATH (Fear of ATH) is an equally important feeling and it is dominant currently. 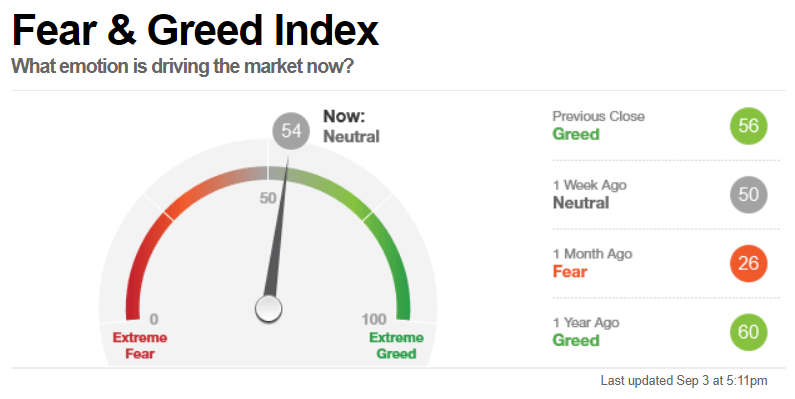 All jokes aside about acronyms like FATH and FOMO we believe the real reason for this current sentiment is… the psyche. We firmly believe that the majority of investors have been beaten down in the last 18 months since the ‘Corona crash’ started. And the strong divergences between the 3 month cycles that followed the epic crash last March is one that the fooled the majority of investors. The nature of this market in the last 18 months, the acceleration of bot and algorithmic trading and particularly the failure of almost all trading methodologies (as explained back in May in A Bigger Move In SPX Is Underway) must be the root cause. But the underlying issue though is the human mind, and how it functions. The human mind it tends to associate current and future realities based on recent history. As humans we tend to let our recent memories dominate how we feel and think about present time and the near future.

Many investors and traders got burned recently, consequently they will be fearful now.

Back in 2007 we believe sentiment was ultra bullish. Although we were not as deeply involved in research as we are today we do remember from studying history that the overarching sentiment was very bullish in 2007. This *might* imply that stocks will continue to climb the wall of worry. But remember there is a highly bi-furcated stock market which implies that there is no broad participation in the stock market rally.

Our psyche might still remember the phenomenal momentum across most sectors and stocks between mid-November 2020 and mid-February 2021. Since March markets operate in a really different: some indexes continued their rise, some retraced (think Nasdaq initially, followed by the Russell 2000), there was no broad participation in the rise of the S&P 500, we were faced with momentum implosion. So with these recent memories and knowing how the human mind functions it does make that investors are not bullish regardless the S&P 500 trading at ATH.

This is an excerpt from our latest Trade Alerts weekend update in which we analyze markets like the S&P 500, silver (which flashed a buy signal on Friday). We also pay attention to the inner world of the trader, a topic that remains largely uncovered by other premium and research services even though the inner world of the trader is the most important success factor.

The Only Commodity Not Impacted In 2022, Currently Right Below ATH

Will Bitcoin Move Back To 30k?