Gold Mining Stocks Break Down: Buy Or Sell In 2017?

Bloomberg noticed a week ago that the gold mining stocks rally was sputtering. However, we would say that is an understatement. Already two months ago, we observed that gold miners ran into secular resistance, based on the chart pattern presented in below chart.

We remain firm in our belief that chart patterns are the strongest indicators available to every investor, and the beauty is that they are for free. The only prerequisite to identify chart patterns is to have an open mind when examining charts. Openness, however, appears to be the biggest challenge for most investors, which is why only a minority of 20% of investors is successful.

Given this week’s price action in gold mining stocks, the key question is whether gold miners are a buy (buying opportunity) or a sell (more downside potential) going into 2017?

Our viewpoint is simple: gold mining stocks are breaking down, and have much more downside potential in the coming months. Gold mining stocks are a SELL in 2017. Our standpoint is based on supply/demand in the market, reflectd in the chart pattern. As shown below, the current chart setup is very destructive. After a unsuccessful attempt to break through secular resistance, it became clear that the gold mining stock sector was hugely overbought.

It is not only chart analysis that lead us to a sell recommendation, but also fundamental data.

First, as noted by Bloomberg, “at the end of the second quarter, miners traded at about 26 times estimated earnings, compared with 17 times for the members of the MSCI World Index of equities, and 18 times that of companies in the Standard and Poor’s 500 Index. That same quarter, fund managers including billionaire George Soros who accumulated shares of producers such as Barrick and Newmont Mining Corp. began unloading mining equities.”

Second, positions in the futures market are hugely bearish, as explained three months in Gold’s Most Critical Test: Strongest Resistance Area Of Its Bear Market. Sooner or later, the huge net positions will revert to lower levels, which comes with (much) lower prices. That remains, by far, our biggest concern for gold investors. 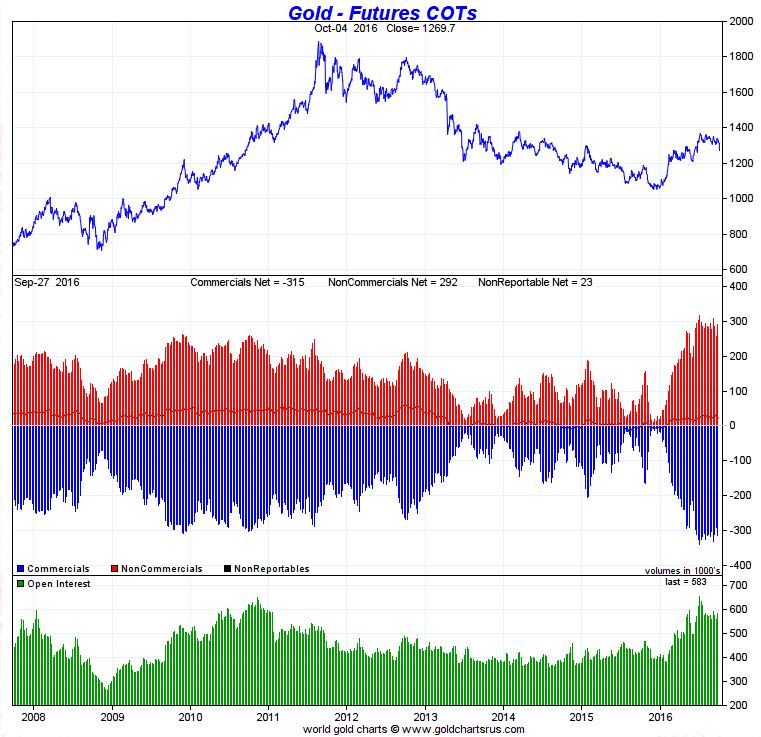 From a long term fundamental perspective, we are convinced that every investment portfolio deserves at least 10% of gold assets. However, given the current bearish setup, both in the price chart, fundamental data and futures market, we would reduce the gold holdings to acquire new positions at discounted prices.