7 Things Investors Have To Know About The Upcoming Bitcoin Fork

In this article, our research team put together facts we think our readers need to know about the upcoming Bitcoin upgrade. Although our publications are usually focused on Ethereum, we believe this is an important event that will impact all cryptocurrencies and we expect some volatility during the upcoming weeks, specifically for Bitcoin.

1. The date and the event

In the Blockchain technology, every time you need to change the rules of the network a fork must take place. Until today, it’s still the only way to change the protocol. Depending on the required update and if a consensus is reached in the community, a soft or a hard fork might take place.

3. What’s the difference between a soft fork and a hard fork?

This article does a great job providing a non-technical explanation for specific terminology for words like nodes, ledger, blocks, mining, wallet, private key. It also gives some more info about the soft fork and hard fork.

4. The problem Bitcoin is facing

To approve a fork, the Bitcoin community needs to reach an agreement. The community nowadays includes Bitcoin’s developers, Businesses (Exchanges and start-ups) and Miners. In short, we have different players, different agendas, capabilities and ideologies. Therefore, reaching an agreement on the next step for Bitcoin is no easy task.

The following wikipage provides updates on the status of the consensus among the Bitcoin community,

For BIP 148, the activation method is BIP91. BIP91 also triggers BIP 9 that activates SegWit for 100% of that chain provided that the chain is a majority (80% or more). The Signaling for BIP148 starts as of August 1st, 2017 and marks the start of a 14 weeks to Segwit’s activation. Once SegWit is activated, it will reject all non-segWit Blocks.

BIP149 is the Plan B if BIP148 fails to activate in mid-November. It is a last resort put together by the developer responsible for BIP 148 to avoid a hard fork and gives even less decision-power to the miners.

These are some possible and theoretical scenarios for informational purposes only. Other scenarios might occur since this is a first and no one knows what might happen during the deployment.

As of the date of writing this article, major Bitcoin miners have already announced their support for SegWit2X and started signaling BIP91. This announcement signaled that it is now very unlikely for Bitcoin to Split into 2 chains. 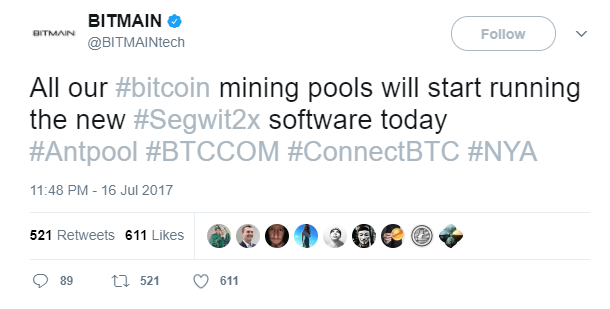 Btcforkmonitor is currently monitoring for a potential network fork and will issue a warning if they detect that the chain broke. Interestingly, up until yesterday the status was green (meaning, no chain split detected). Just today, there was a warning about a chain split but it has been solved in the meantime. No surprise the price of Bitcoin went sharply lower today.

7. What you need to consider

This is a major change and a first for Bitcoin so volatility is expected and technical problems might arise. The good news is that we are seeing the majority of the Bitcoin community opting for SegWit2X so that’s definitely a good sign.

This upgrade will not only impact the Bitcoin future and value but will definitely have an impact on the future value of Ethereum. As InvestingHaven‘s research team has said many times before, there is always a bullish and a bearish side to the story. The Bullish story for Bitcoin is this upgrade will increase its scalability and security so once the dust settles, Bitcoin will continue on its uptrend. The Bearish story for Bitcoin could be a chain split making investors opt for Ethereum .The change in Bitcoin’s Block size is another factor that could turn out to be either Great for Bitcoin or make users or even miners choose Ethereum as a more interesting option.

Our commitment to our readers is that we will be watching the developments of this upgrade and sharing updates and our findings regularly.
This communication is for informational purposes only. It is not intended as investment advice or to be interpreted as such, or an offer or solicitation for the purchase or sale of any financial instrument. No market data or other information is warranted or guaranteed by Investinghaven as to its completeness, accuracy, or fitness for a particular purpose, express or implied, and such market data and information are subject to change without notice. Investinghaven may have issued, and may in the future issue, other communications that are inconsistent with, and reach different conclusions from, the information presented herein. Those communications reflect the assumptions, views, and analytical methods of the persons that prepared them.