This is the summary of the In Gold We Trust report 2018, written by our good old friends Ronald Stoeferle and Mark Valek from Incrementum AG. We only exceptionally publish fundamental articles, certainly about gold, but this is THE gold report of the year, and as we are still strongly connected with Ronald Stoeferle we see sufficient value to give this annual outstanding report the visibility it deserves. Download the report here >>

Quantitative tightening, de-dollarization, and cryptocurrencies seem to be echoing the “It’s the End of the World as We Know It”. Whether we find this changing of the tide good or bad is of no relevance to the phenomenon itself. What is unfolding will affect our lives either way. But the better we brace ourselves for these fundamental changes, the more we will be able to benefit from them.

The key findings of In Gold we Trust 2018 may be summarized in terms of the following three changings of the tide:

The reversal from QE to QT has provoked remarkably little attention in public discourse. However, the consequences of this monetary U-turn could be dire, because the monetary amphetamine that prevented a relapse into crisis in the post-Lehman era has come with numerous side effects.

On the one hand, the monetary medicine has effected a da capo of global debt excesses. In theory, Mario Draghi’s “Whatever it takes” policy should have bought Southern European countries time for structural reforms and debt reduction. In reality, near-zero and subzero interest rates acted as an incentive to accumulate more debt.

On the other hand, investors have grown familiar with today’s allegedly less risky capital market environment and have fallen in love with it. Now the first dark clouds are gathering on the (interest) horizon. Not only the Fed but also the ECB is slowly but surely leaning into the monetary turn (although with a substantial time lag). 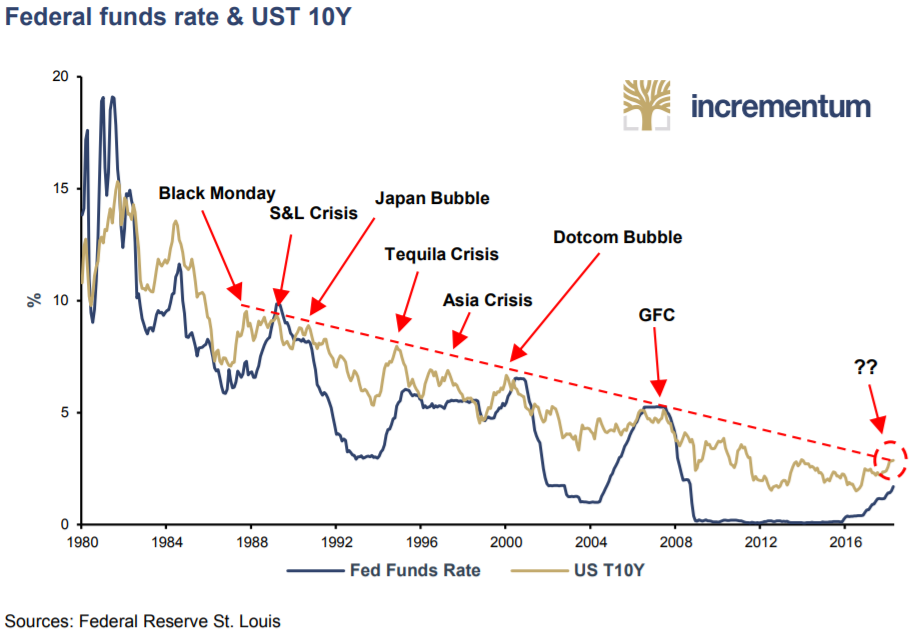 (2) Change of the tide in the global monetary order

De-dollarization and the reshaping of a unipolar world monetary regime into a multipolar one continue. Admittedly, these transitions are occurring in small (and sometimes hardly recognizable) steps; but the trend is clear.

The process comes with geopolitical polarization and rhetoric that promotes divisiveness above unification. This tendency reached a new peak with Donald Trump’s election. Those European politicians in particular who do not conceal their deeply rooted feelings of antipathy toward the property tycoon in the White House are trying to seize the geopolitical moment to escape the shackles imposed by the US at least by a bit. Demands for an EU army are testament to this emancipation movement (as was the establishment of the euro a generation ago).

Intensifying trade conflict is going hand in hand with the currency war, which was declared a while ago. Even though the trade war is still being fought with blanks, the increasingly martial rhetoric and the rising degree of irrationality inherent in trade policy decision-making have added to economic and political uncertainty. While the measures taken so far have affected only a very small portion of the economy, the importance of the measures as symbolic political acts cannot be underestimated. For the US, the gradual loss of currency hegemony could have far-reaching consequences. Falling demand for the US dollar and Treasuries could fuel both inflation and interest rates.

It remains to be seen what effects the debt problem will have on the changing of the tide in foreign exchange policy, especially since no one can do away with the hard truth that one party’s receivable is the other party’s liability. Whoever suggests the culling of nominal debt has to be aware of the fact that financial assets have to be written off at the same time and in the same amount as counterparty liabilities. The geopolitical powder keg that such a debt jubilee would set off needs no detailed explanation.

(3) Change of the tide in technology

We have experienced a swift technological shift of epic proportions. More and more financial transactions are being executed via smartphone and the internet. The advent of cryptocurrencies has led to further acceleration of the digitalization of money. Fascinatingly, the emergence of these new technologies has set off a Hayekian competition that is attracting human and financial capital keen on innovation. 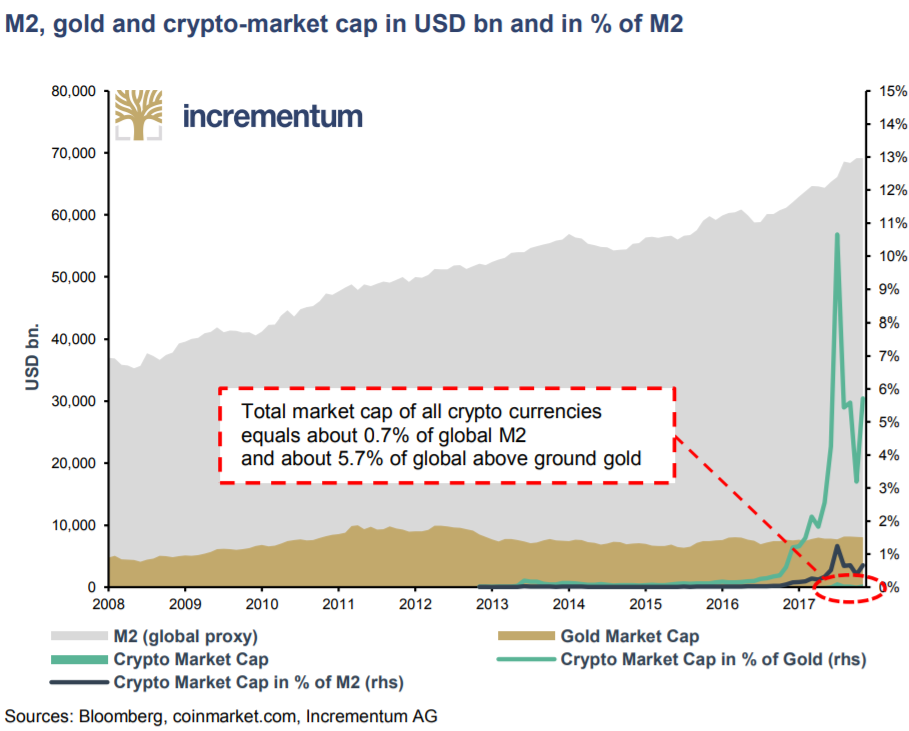 Each of these three tidal changes holds the potential of inflicting fundamental transformation on the world. But what does this turning of the tide, the first signs of which we are now seeing, mean for the price of gold?

A glance at the status quo on the financial markets shows the headwinds that gold currently faces:

Mulling over this list, we were reminded of a statement by our esteemed colleague Adrian Day: “People expect too much from gold! Whatever scenario you’re in, everyone expects gold to react more than it does. But when you think about what gold has done, I think it has done very well this year.” In other words, gold aficionados should not fall prey to the mistake of expecting excessive price gains as long as those headwinds prevail.

We also have to point out in this summary a new aspect of the financial markets, one that might turn into a blessing for gold. What distinguishes the current phase decidedly from the runup to earlier big stock exchange crashes (1929, 1987, 2000, 2008) is the simultaneously high valuations of stocks and bonds. Previously, bonds would help contain any losses on the stock exchanges due to the negative correlation of these asset classes. However, bond valuations have climbed into extremely thin air at this point. From a purely mathematical perspective, bond prices will hardly be able to post any further gains unless the Federal Reserve takes a dramatic step towards negative interest rates. A fantastic piece by Deutsche Bank recently showed that an equally weighted index of shares and bonds is currently trading at the highest level since 1800(!). Sooner or later the financial markets will have to bow to the law of gravity and embark on the return trip to the mean133F – which could catch many portfolios on the wrong foot.

So what happens if both shares and bonds dive in a bear market? What will be the safe haven, now that the traditional pattern of negative correlation has changed? Will it be cash, property, Bitcoin, or – yet again – gold? We are convinced that in such a scenario, gold will be among the biggest beneficiaries.

Our discussion has shown that gold should benefit from a dynamic environment of fundamental change. But what about the short- and medium-term outlook for gold? Last year we established several scenarios for the gold price that were in tune with the momentum of GDP growth and the further development of US monetary policy. The time horizon we used was the term of office of the current US administration (2017-2021), by the end of which period the Fed expects monetary normalization to have been achieved.

The path of the gold price has so far moved in the range of scenarios B and C. The actual growth and inflation figures reflect this path rather well. The crucial issue will be whether the feat of the monetary normalization is successful and whether scenario B or C will prevail in the coming years. A recession is overdue; the changing of the tide in monetary policy could trigger one in the coming 6 to 24 months.

How does the gold price perform in recessions? Short answer: Very well! On the one hand investors are looking for safe havens in times of crisis, and gold is the classical safe haven asset; on the other hand many investors will anticipate monetary and fiscal stimulus and buy gold for inflation protection.

We have also distilled these additional key findings from this year’s journey through the world of gold, which we analyze in depth in the extended version of this year’s In Gold we Trust report, available for free at www.ingoldwetrust.report:

The central point is this: The global boom, fueled by ultra-low interest rates and the never-ending expansion of the money supply and credit, is on shaky ground. The likelihood of the boom turning into a bust is high –much higher than the mainstream expects.

We therefore anticipate a significant global economic dislocation with a substantial effect on the gold price in the coming years. As always, we will monitor these events, analyze them in detail, and comment on them regularly. Gold will definitely contribute to staking out a comfort zone in the turmoil of the tidal changes that we have discussed.

Incrementum AG is an independent investment and asset management company based in Liechtenstein. Independence and self-reliance are the cornerstones of our philosophy, which is why the four managing partners own 100% of the company. Prior to setting up Incrementum, all members worked in the investment and finance industry for years in places like Frankfurt, Madrid, Toronto, Geneva, Zurich, and Vienna.

Incrementum AG is very concerned about the economic developments in recent years, especially with respect to the global rise in debt and extreme monetary measures taken by central banks. They are reluctant to believe that the basis of today’s economy, i.e. the uncovered credit money system, is sustainable. This means that particularly when it comes to investments, acting parties should look beyond the horizon of the current monetary system. Their clients appreciate the unbiased illustration and communication of our publications. Their goal is to offer solid and innovative investment solutions that do justice to the opportunities and risks of today’s prevalent complex and fragile environment.