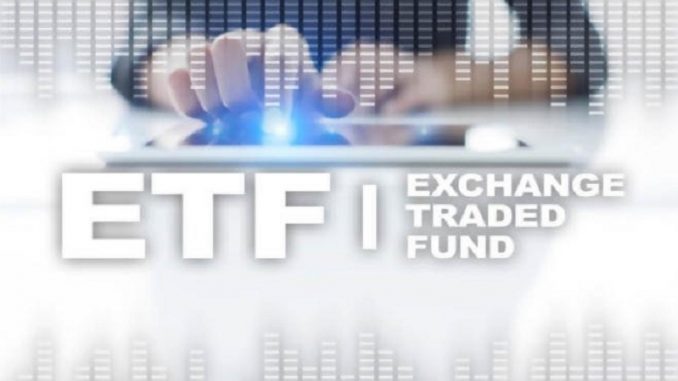 The first blockchain ETF we discuss is BLOK ETF by the company Amplify ETFs. It contains some 50 stocks with a combination of traditional technology stocks (like IBM, Oracle, Microsoft) and some pure play blockchain stocks like HIVE Blockchain. The focus of BLOK ETF is on large cap tech companies and some banks with a geographical focused on the US.

Only a very small portion of the stocks listed in blockchain ETF BLOK are pure play blockchain stocks, and the absolute majority have a minimal level of affinity with blockchain at the moment of writing. They are shown in the table in this article, second row.

The way to read the table: BLOK ETF represents the stocks in both the 2nd and 3d column.

Needless to say, the portion of pure blockchain exposure in this blockchain ETF is very small. The question is: are you really investing in the blockchain trend with BLOK ETF? The answer is: only to a minor extent.

BLCN ETF represents some 60 stocks. The number of stocks with exposure to pure blockchain plays is similar to BLOK ETF. However, the big difference is the spread across regions and, also, somehow more industries. BLCN ETF is more diversified in other words.

We expact BLCN ETF by Reality shares to be slightly more volatile especially because they have much more Asian companies. The strong bull market in emerging markets which started recently will contribute to that.

The stocks that are part of BLCN ETF are the moment of writing are in the first and third column of this table. 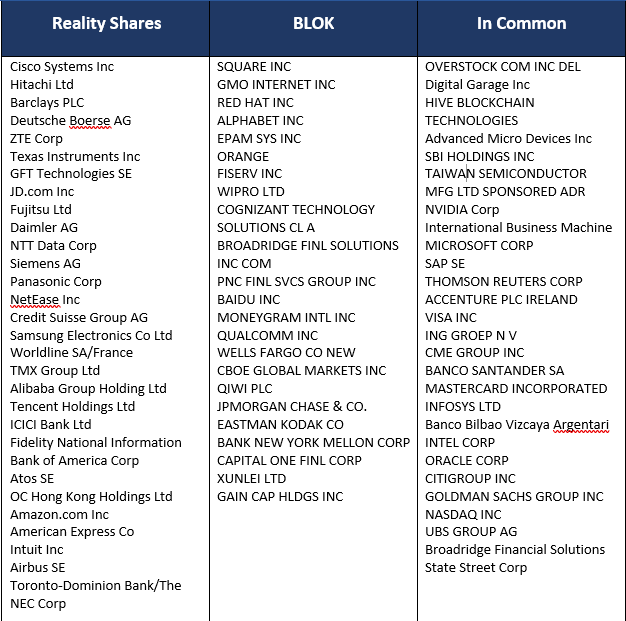 InvestingHaven: work out your own blockchain ETF

Instead of buying into a blockchain ETF which, as shown above, does not provide much exposure to blockchain, we propose investors take a more do-it-yourself approach. With blockchain ETF, in this case, we refer to a selection of stocks which investors select based on InvestingHaven’s research, and weigh in a way that fits their personal style and portfolio.

InvestingHaven designed a blockchain stock investing research service which tracks more than 60 blockchain stocks. Each stock has a score based on a proprietary assessment; the score suggests how high the probability is that the company will be a market leader as the blockchain industry matures. Stated differently, how likely is it that the stock will thrive in the future similar to how Amazon, Paypal and Apple became 100-baggers during and after the dotcom bubble.

The most interesting aspect of this blockchain investing research service is the blockchain ecosystem in which blockchain stocks are categorized. It is a great way to diversify within the blockchain space, an approach we have not found anywhere else before. Related to this we clearly indicate that investors spread based on market capitalization: large caps, mid caps, small caps, micro caps (though with limited exposure to the latest group).

Blockchain ETFs may be popular, and an easy way to get some exposure to blockchain, we are convinced that they are not providing sufficient value. A do-it-yourself approach has much more potential.