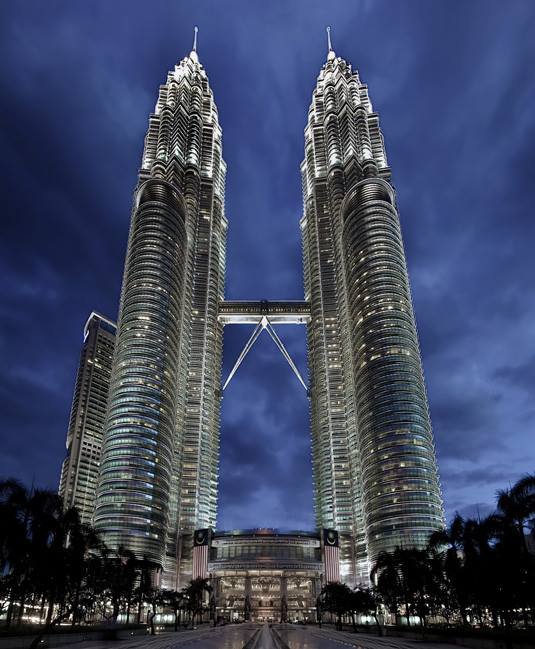 Malaysia, a Southeast Asian country which occupies parts of the Malay Peninsula and the island of Borneo is well-known for its iconic Petronas Twin-Tower, beaches, rainforests and mix of Malay, Chinese, Indian and European cultural influences, just to name a few. Besides that, Malaysia is well-endowed with natural resources such as petroleum, rubber, palm oil, domestic plantations and ore.

Throughout the introduction of the New Economic Policy (1971-90), followed by the National Development Policy (1991-2000), the Malaysian government successfully produced a report card with GDP growth rate of between 4 – 6% annually excluding the 2000 dotcom bubble and 2008 global financial crisis. 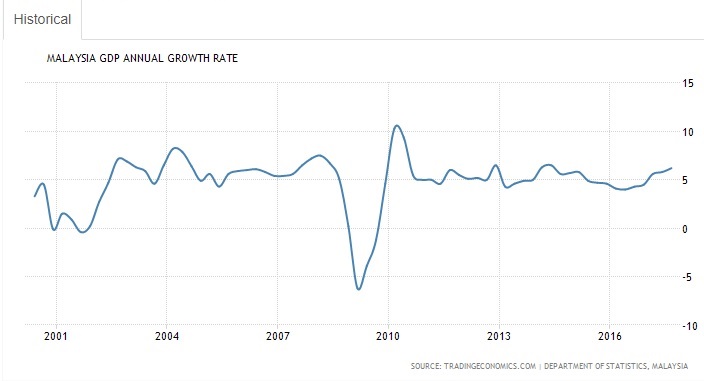 As this  country’s economic situation matured, making businesses highly competitive, companies, especially MNCs from foreign investment, started to feel the need to cut costs either by layoffs or relocation in order to remain long term profitable. A recent announcement of these famous companies to either relocate or discontinue their operations surely makes the situation a little gloomier than before as an estimated 8,000 employees will be affected.

While this short term knee-jerk reaction looks concerning from a human point of view, InvestingHaven remains neutral to bullish because of 2 important factors. One, the huge bilateral partnership between China and Malaysia on President Xu Jin Ping’s One Belt One Road initiative will undoubtedly benefit Malaysia economically in terms of infrastructure, connectivity, social facilities, better living standards and abundant business opportunities. Second, the monthly chart of Malaysia’s stock market index, FTSE KLCI index does not paint a bearish picture. 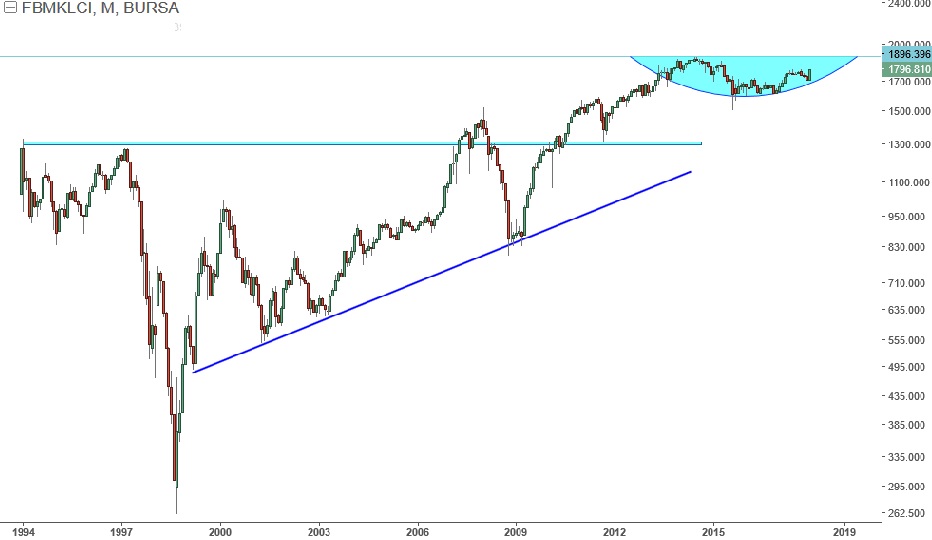 The monthly chart of the KLCI index experienced a despair and panicking crashed during the Asian Financial Crisis in 1997. Former Prime Minister – Dr Mahathir Mohammed imposed strict financial regulations hoping to control the outflow of capital, and pegged the Ringgit to 3.80 against the U.S dollar after the ringgit had depreciated from 2.50 to 4.57 within 7 months which resulted in a loss of value of over 50%. From then onwards, KLCI was totally resilient towards the 2000 dotcom bubble and 2007 global financial crisis. As can be seen from the chart, beginning in 1994 and ranging all the way to 2010, it took KLCI 16 years to consolidate before it broke out of ~1300 level. The breakout got confirmed on the retest in Sep 2011.

The bullish projection of KLCI for 2018 will be the second attempt to break the ~1900 resistance which will most likely lead to the formation of a mini cup for further breakout if the economy of Malaysia keeps on progressing. Unless the index breaks below ~1710, our original bullish outlook will switch to neutral as it would mean more time is needed for consolidation.