This might be the ultimate contrarian bullish indicator for crypto: it made it to the cover of The Economist and Bloomberg. While there is nothing wrong with the intellectual side of The Economist nor Bloomberg, quite the opposite in fact, when it comes to financial markets we do know that financial media tend to cover topics on their frontpage right at a turning point. Note that this does not mean that BTC will not go any lower, the next few days or week. However, this article is meant to put against the big picture, think 2023, think medium term oriented crypto forecasting.

Exceptionally, we are not going to feature a chart. This article is also not meant to predict anything (nor do we intend to write a detailed analysis like our XRP forecast).

We will only feature the cover of a magazine.

This cover might be the ultimate contrarian signal that there is no crypto market crash underway but rather a bottoming formation.

Both The Economist and Bloomberg featured some really doomsday covers related to crypto. While the facts about FTX and SBF are clear and valid, it is not exactly clear how much further they will impact the crypto market. 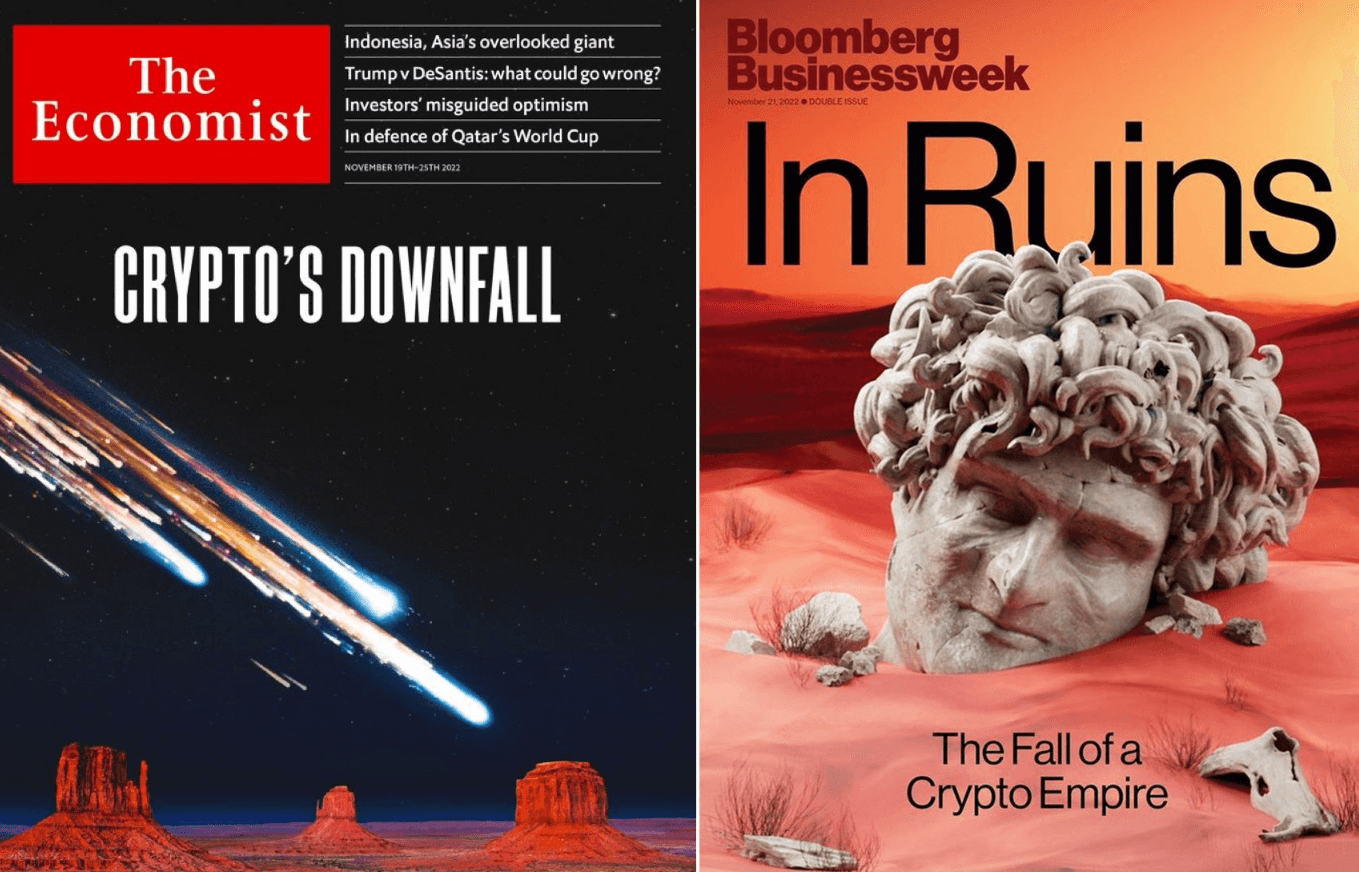 What we do know, though, is that these outlets have an almost perfect timing when it comes to spotting turning points. Stated differently, whenever a financial markets related topic makes it to their front page, it mostly happens close to a turning point.

Take Barron’s, for instance, who published a U.S. Dollar cover right on Oct 10th: The U.S. Dollar Is Superstrong. How to Invest Now.

This is not a recent phenomenon by the way. If we go back to December 2016, when the USD peaked, we see similar coverage of the USD on the cover of The Economist. Courtesy of Twitter, we have found this blurry picture which depicts the timing of the frontpage and maps it to the USD chart.

Similarly, The Economist covered the fall of Brazil in Dec of 2016. It marked almost exactly the turning point of the Brazil stock market.

While we are not saying that BTC cannot go any lower (there probably is some more downside), we could easily make the point that crypto has reached ‘max pain’. Bigger picture, this might coincide with a last bottom near (approximately) current levels.

Stated differently, the downside in crypto might be limited. In relative terms, less downside compared to sentiment and perception of the majority of the market.

In our crypto investing research service we are closely tracking DeFi and DEX tokens as they *might* be starting a mega trend, pending validation of the market.

Which Sectors Will Be Bullish In U.S. Markets In 2023?

Nickel About To Heat Up As 2023 Kicks Off

XRP: A Giant Bullish Reversal, Among The Most Bullish Long Term Crypto Charts