Exactly one week later YFI.V broke out, faster than expected, and tested its previous two tops. The previous tops reached an intraday high at $0.62 and $0.63, yesterday’s intraday high was $0.57.

This article describes a couple of thoughts of InvestingHaven’s research team.

In the latest investor presentation the company truly confirmed our expectations. They are doing exactly what they have to do, i.e. develop their technology in order to find product / market fit. That is a methodology that accelerated in recent years with the ‘lean startup’ method. We are a fan of that method, and, after following Edgewater Wireless, we recognize their product / market fit approach in their evolution.

Two slides stand out to us.

First, the company has clearly worked out a path to generate revenue. Below are three product / market combinations which are worked out better than say one or two years ago. It suggests to us that the company is becoming better in getting successes, which, ultimately, is the basis of growth.

Second, the company is getting traction. That is an incredibly important pivot point for any startup. 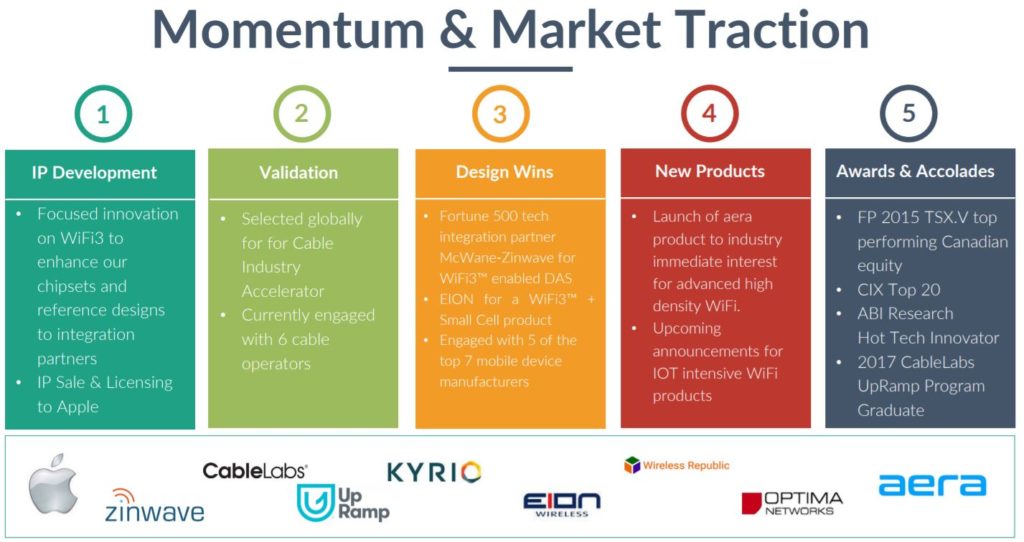 The chart shows strong peaks in the last 2 years. Every strong rally coincided with distinct successes of Edgewater Wireless. For instance, the first rally in March 2015 was the announcement of engaging with Apple as a customer. This maps with just one of the points on above slides. August 2016 coincided with the news of getting adopted by the incubator program.

What we are trying to say is that all pieces are starting to fall together now for Edgewater Wireless. Once the market sees that, and once the company starts communicating success in headline terms (revenue growth first and foremost) the price of the stock will break out of its long term range. That is when this company will become a ten bagger.

When exactly it starts is impossible to know. But we sense that it will not take very long, 2018 could become a pivotal year for YFI.V