Last week we published Ripple’s price chart for 2017 and 2018, and concluded that Ripple looks bullish but has a bearish aspect as well.

To refresh your mind we higlight the two quotes which were important in that article:

Readers asked us when to buy Ripple. That is a great question, and there are two answers.

On the one hand, it looks like the $0.15 level is a solid support. Nobody knows how many times Ripple will test that price. Nobody knows whether it will ever trade that low again, maybe it will only go higher from here. But anytime Ripple comes close to $0.15 it would be a buy opportunity.

On the other hand, once the price of Ripple goes above $0.26 it is certainly time to add positions. That is because we identified $0.26 as the breakout point on the chart. Once above $0.26 there is a fair chance that it would be the ultimate sign that the next uptrend has started.

We stick to our belief that Ripple will be one of the outperformers among cryptocurrencies. We also said in the past that “their service takes a long time until it gets adopted, as their customers are central banks and financial institutions which extremely slow decision processes and old legacy payment platforms.”

We are convinced that many believers in Ripple sold their holdings in the last couple of months just because its price did not skyrocket similar to Ethereum or Bitcoin, after it hit its highs in May/June. However, that is exactly how major bull markets work: believers sell their holdings during a consolidation period, start chasing it once prices trend higher again, only to realize they were too late and sell their holdings again. Smart investors got 20 tips with timely wisdom from our Blockchain Investing Research. 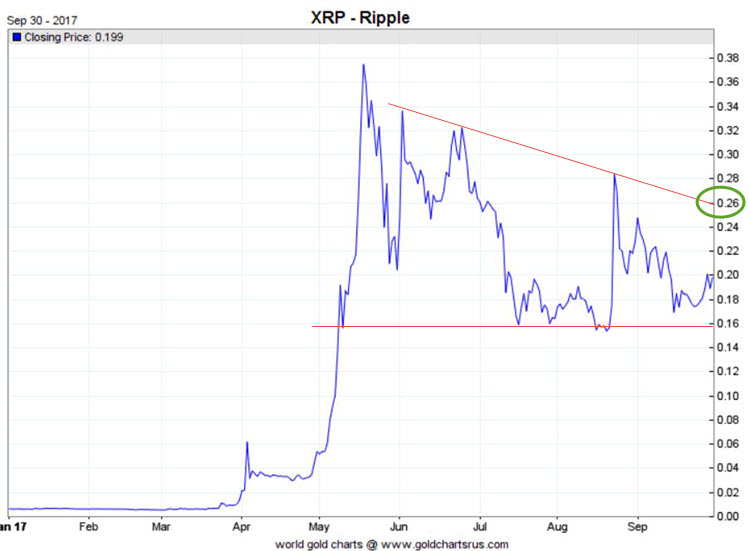