Why Ripple’s Price Will Continue To Rise

Cryptocurrencies are all over the place nowadays. All major financial media have ‘discovered’ cryptocurrencies. While they were fast to call out the end of a bubble in September, when the last major correction took place, they hasten to explain now why cryptocurrencies have such a great future. InvestingHaven is for many months calling for a mega breakout in the price of Ripple, and this week was the moment we were proven to be right once again. We are on record to call for Ripple’s price to continue to rise, here is why.

Before doing so we would like to call out that almost 5 months ago we did this Ripple price forecast: Why The Price Of Ripple Will Rise Above 0.50 USD In 2017. It was the only cryptocurrency price forecast which did not materialize this year.

A couple of weeks ago we described in this piece a Must Read Ripple Price Prediction how exactly Ripple was building momentum, and how it would break out. We essentially looked at market dynamics and trading patterns, purely based on the chart, to understand what’s happening in Ripple and how things would play out.

This is what we said:

When considered relative to other altcoins, Ripple has not gone up in a significant fashion since May 2017, whereas other altcoins did. This resulted in profit taking as soon as there is a small spike and the most notable outcome is heavy selling among Ripple holders in general. Once all selling is exhausted it sets the stage for a very strong bullish move.

Moreover, we continued to indicate why Ripple’s chart looked awesome, purely based on price patterns. Both in Why Ripple’s Chart Continues to Look Awesome and in Ripple Price Very Close To Mega Breakout we identified a consistent pattern of higher lows which, in plain simple terms, means that weak hands are leaving the market at increasingly higher prices.

That is a great recipe for a mega breakout which materialized this week.

Ripple will continue its price rise

This old saying applies to cryptocurrencies as well, and is highly relevant in Ripple’s case: the bigger the base, the higher in space.

Ripple broke out after a period of sideways trading which took 6 months. Now traditional stock market investors will challenge this arguing that 6 months is nothing. Well, not that fast, as 6 months in cryptoland cannot be compared with traditional markets. Things go 10 times faster in crypto.

Given the extraordinarily long period of 6 months of sideways trading, which is the proverbial base, it implies that Ripple’s price can rise much higher from here. It will maybe not go in a straight line, but who cares about that?

Readers can match the points we outlined above on the chart in this article.

Whether this price rise in Ripple is related to the lockup or not Ripple Escrows 55 Billion XRP for Supply Predictability is of 2nd importance. The fact of the matter is that the chart was forecasting the behavior of buyers and sellers, in other words Ripple’s future price direction. That is ulimately the only thing that counts, all other news are of secondary importance.

How high can Ripple’s price rise? We can make a case that Ripple will move to 2.50 USD in 2018. That is because cryptocurrencies tend to go up tenfold once they accelerate. Counting from the 0.25 breakout point we derive this longer term price target for Ripple.

Note: we are not saying that Ripple will trade at 2.50 USD in a couple of weeks, although nothing can be excluded in cryptoland. Timing is everything, and holding strong to the strong cryptos like Ripple is mandatory for success.

We are the first in the world to publish a Blockchain Investing Research service which explains in detail how to be successesful with cryptocurrency-investing and blockchain stocks. Readers who followed our tips have held strong into Ripple, and they got tips on how to remain successfull moving forward. We consider it a must-read for investors who are discovering crypto-investing. 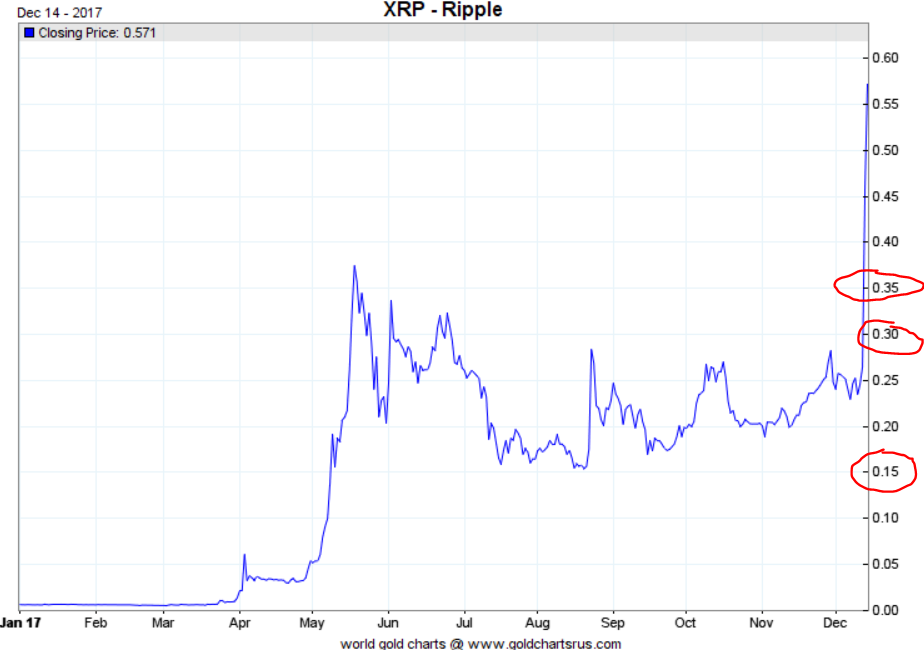