(Ed. note: this article was updated on September 4th 2017 after the price of Ripple fell sharply. Our editorial team added an update on the Ripple price at the end of this article)

Things look very bullish for Ripple. Given the setup of Ripple’s chart combined with the fundamental drivers behind Ripple we expect that Ripple’s price will rise to $0.50 in 2017, around year-end the latest.

First, and foremost, Ripple’s chart looks awesome. After an amazing rise early this year, Ripple’s price touched $0.40, and came back sharply since then. From mid-June till mid-August 2017 Ripple’s price did basically go nowhere. A relatively long (in cryptocurrencies terms) consolidation took place between $0.16 and $0.20.

When Ripple’s price almost doubled overnight, last week, it was the first sign of a new potential upleg. What caught our attention on Ripple’s chart is that it rose sharply, but, more importantly, came down only to test what is called its breakout point, which is the point it crossed once it rose over its falling trendline (the black falling line on below chart). The fact that Ripple stayed about that $0.21 level since then is extremely encouraging.

Ripple must continue to trade above $0.21 in order to remain bullish.

From a fundamental perspective, we know that Ripple was involved in a task force organized by the Federal Reserve which was meant to improve the (meantime very old school) payment platform. Cross border payments which take 3 to 5 days is really a sign of outdated systems. Ripple could be playing a role in the renewed payment platform of the Fed, among many other central banks around the world. This article learns that the UAE government is also looking at Ripple to improve its payment platform, while this one says China is also interested to work with Ripple.

We do not base our trading decisions on articles. However, there are sufficient fundamental drivers which make us believe that Ripple is here to stay. Combined with the breakout on its price chart we expect Ripple to trade at $0.50 by the end of 2017. Chart courtesy: Goldchartsrus. 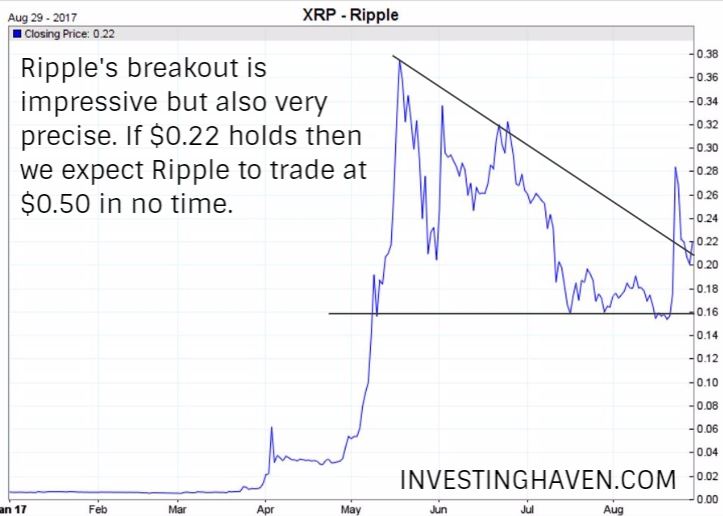 UPDATE SEPT 4th: On September 3d and 4th the price of Ripple fell sharply and lost some 30% in just 48 hours. Although that is meaningful it was a decrease in line with all other top 10 cryptocurrencies as explained in this article. It is no reason to worry (yet). We still believe Ripple will outpeform other cryptocurrencies over time because of the high intrinsic value that this cryptocurrency offers.