Cryptocurrencies Crashing. Time To Sell Or Buy The Dip?

Cryptocurrencies are crashing. In the last 48 hours most of the largest cryptocurrencies lost approximately 30%. Is this time to panic and sell everything (as implicitly suggested by this Forbes author)? Or is this a buy opportunity?

Before looking into the details we would like to stress the fact that this type of volatility makes an investor intuitively think that he/she has to act. However, that is a big trip. Do not forget that not trading is also a form of trading.

Let’s see what the charts have to say about our key question.

The crypto top 10 index which is an equally weighted index of the 10 largest cryptocurrencies (Bitcoin, Ethereum, Ripple, Litecoin, NEO, Monero, Dash, Iota, ETH Classic, Bitcoin Cash) is shown on the first chart. The index lost 30% over the last 2 days. That is meaningful, but at the same time it is no exception. Cryptocurrencies are extremely volatile, so a 30% decline is not necessarily a bad thing … it could become bearish, but it will not necessarily.

We look for patterns and trends on this first chart, and primarily found those rising channels which are annotated in purple. The chart learns that there are roughly three areas:

It was no surprise that prices fell sharply in recent days because they rose up until the upper area of the upper channel. After a parabolic rise it makes sense that some air gets out of an heated market.

Interestingly, today’s correction brought the index to the lower part of the upper channel. So while the fall of 30% sounds scary, and suggests cryptocurrencies are crashing in a way that a bear market started, it is certainly not the case at this moment in time. It could become worse, but according to the chart currently it is a normal retracement.

As long as this index remains in one of the 3 channels it is still in a long term bull market. 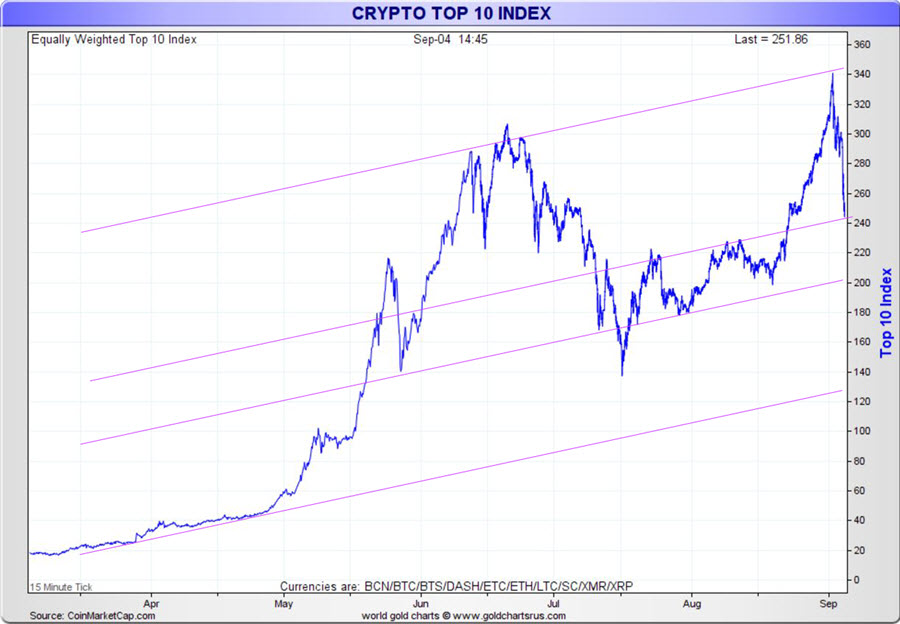 The next chart shows the 9 largest cryptocurrencies in terms of market cap. We made annotations on 7 out of the 9 charts, the ones we deem most relevant.

All of them, with the exception of Iota, are still in long term uptrends. They have respected their rising patterns, even if each one of them has a different type of pattern.

The point we try to make with these charts is that the ongoing correction did not violate any rising pattern. That just confirms the conclusion we drew from the chart above although we looked at it from a different angle.

So, to answer the initial question, the 30% crash in cryptocurrencies has not done anything meaningful to the patterns on the chart(s), at least no yet. In this type of situation investors better wait to see what happens next. If (a big IF) this correction continues as aggressively as it is doing right now it could get concerning at a certain point. However, if this correction ends anytime soon, and prices stabilize, it would probably offer a very interesting entry point. We believe that Ripple could become one of the great outperformers in the next leg up. 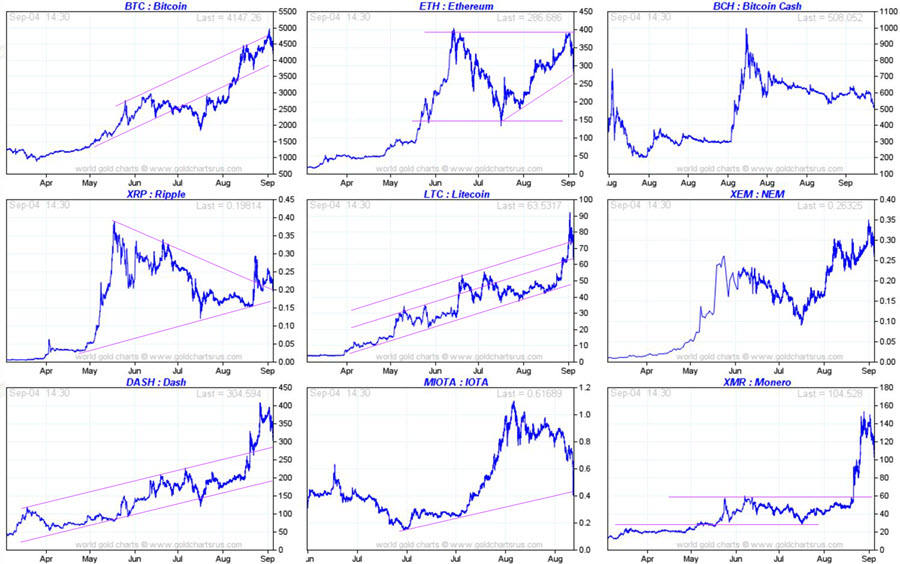 Which Sectors Will Be Bullish In U.S. Markets In 2023?

Nickel About To Heat Up As 2023 Kicks Off

XRP: A Giant Bullish Reversal, Among The Most Bullish Long Term Crypto Charts