A Litecoin Forecast: Will Litecoin’s Price Continue To Rise?

Update 12 December 2017: the price of Litecoin goes balistic, it touched 400 USD today after which it retraced almost 20 percent. This is amazing, and we provide an update at the bottom of below article which was originally written in July of this year.

Update mid-November 2017: we see more upside potential in Litecoin as explained in Litecoin price on the rise mid-October. Moreover, given today’s chart setup, we expect the 100 USD in Litecoin’s price to materialize before 2018 starts.

After multiple requests from readers to analyze other altcoins other than Ethereum and Bitcoin, we felt it was time to write our Litecoin price forecast.

This article starts with an analysis of Litecoin’s current value which will be the basis for a Litecoin forecast (future potential). Our focus is on the following:

The official site Litecoin.com explains what Litecoin is. It is essential to understand what Litecoin is and does, before looking into a Litecoin forecast, even if most investors do not care too much about the technology.

Litecoin is a decentralized cryptocurrency created in October 2011. Litecoin can be used to buy services or products. It provides a safe and easy way for merchants to receive money as there are no fees to receive payments! All transactions are registered on a public ledger which is called Blockchain so payments can be immediately verified.

With Litecoin you can send money to anywhere in the world to anyone, instantly. The transaction fees are considerably lower than those charged by major credit card companies, traditional bank transfers and even online payment processors (think of Paypal). Traditionally, cross border payments have been several days before they arrive at the recipient’s end. There will only be maximum 84 million Litecoins so there is no worry about inflation.

The big difference with other cryptocurrencies is that Litecoin is faster and much more efficient in handling transactions. This article gives a more detailed comparison between Litecoin and Bitcoin.

The months of June and July have been difficult months for Cryptocurrencies in general. The price of most altcoins retraced sharply after reaching spectacular new all-time highs.

Looking back at the last 3 weeks ending Sunday the 16th, we notice that one altcoin stands out compared to it’s peers. That digital coin is Litecoin.

The chart below compares the retraces for the Top 4 Cryptocurrencies by market cap.

Since then, most cryptocurrencies started bouncing back, with Ethereum leading the pack.

Litecoin: The story and the founder behind the coin

When assessing Ethereum and cryptocurrencies in general, the challenge we faced was the lack of actionable hard data. The same goes for Litecoin, although the latter has been around longer that Ethereum did.

So, what is Litecoin exactly? What’s the vision behind it and what’s its value proposition? In short how does it differentiate itself from the sea of existing altcoins?

“Litecoin is a peer-to-peer internet currency. It is a fully decentralized open source, global payment network. Litecoin was developed with the aim to improve on Bitcoin’s shortcomings, and has earned industry support along with high trade volume and liquidity over the years. The broader differences between the two cryptocurrencies are listed in the table below.” Investopedia

Litecoin was created by Charlie Lee, a former software Engineer in Google and Director of Engineering at Coinbase. Last month, Lee announced his resignation from Coinbase to focus on Litecoin and hired the first full time developer to work with him. This developer is Shaolifry. This is important news because Shaolifry is not only a Bitcoin developer but he is also the mastermind behind Bitcoin’s UASF BIP148. Lee’s resignation and this hiring could potentially bring this digital currency closer to the initial vision behind creating Litecoin. That vision was to make it “the silver to Bitcoin’s gold,”. Although it looks like Ethereum has earned that spot.

In terms of supply, Litecoins’ generation is limited to 84 million, 4 times the limit of Bitcoin. The generation of a Litecoin requires a quarter of the time needed for a Bitcoins.

To sum it up, we have an Altcoin with decent code and it looks like the leadership behind it is mobilizing to take it to the next level.

Now that we looked at the story and the vision behind Litecoin, we want to take a deep dive into the price action. The chart below illustrates how the price went from $4 to $56 in just 3 months. What happened?

April 22nd, Litecoin community Reaches Round Table Resolution for Protocol Upgrade (SegWit), similar to the upgrade Bitcoin is about to undergo. That was the start of the Rallye for Litecoin.

June the 16th, Litecoin reports no issues following the deployment of SegWit, that triggered the 2nd leg up in Litecoin’s price. 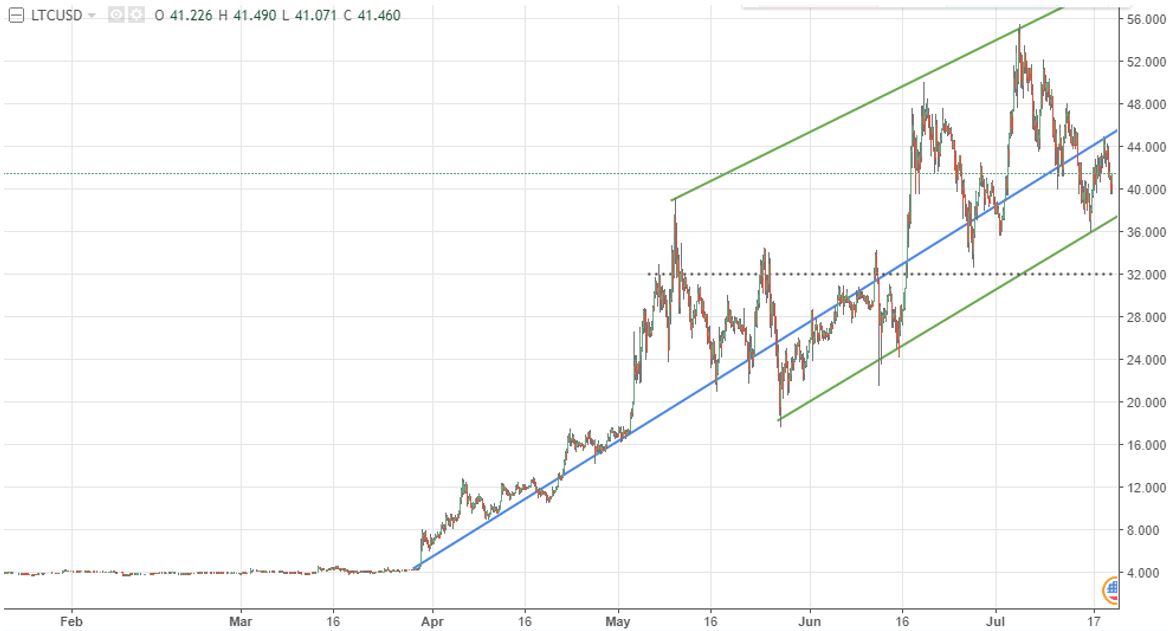 From the chart, we can see a clear up trending channel (Green channel). Within the channel, the Blue line was a support trend line in April and May. As of May 26th, this trendline became a resistance till Litecoin broke out of it on June the 16th and is now back again to being a resistance.

This leads us to the following Litecoin forecasting scenarios:

When a cryptocurrency increases by more than 1000% in less than 3 months, it becomes due for a correction. Sooner or later this will happen and those who have been trading Cryptocurrencies know how those retraces can be sharp. We have seen this happen early July for Cryptocurrencies so we will review below how Litecoin performed compared to bitcoin and Ethereum during this period.

As of July 4th, Litecoin started outperforming Bitcoin. Understandable given the concerns with Bitcoin’s potential network split (Hard fork) and fears of what will happen following the upgrade. The chart also shows a politecsitive correlation between the two. 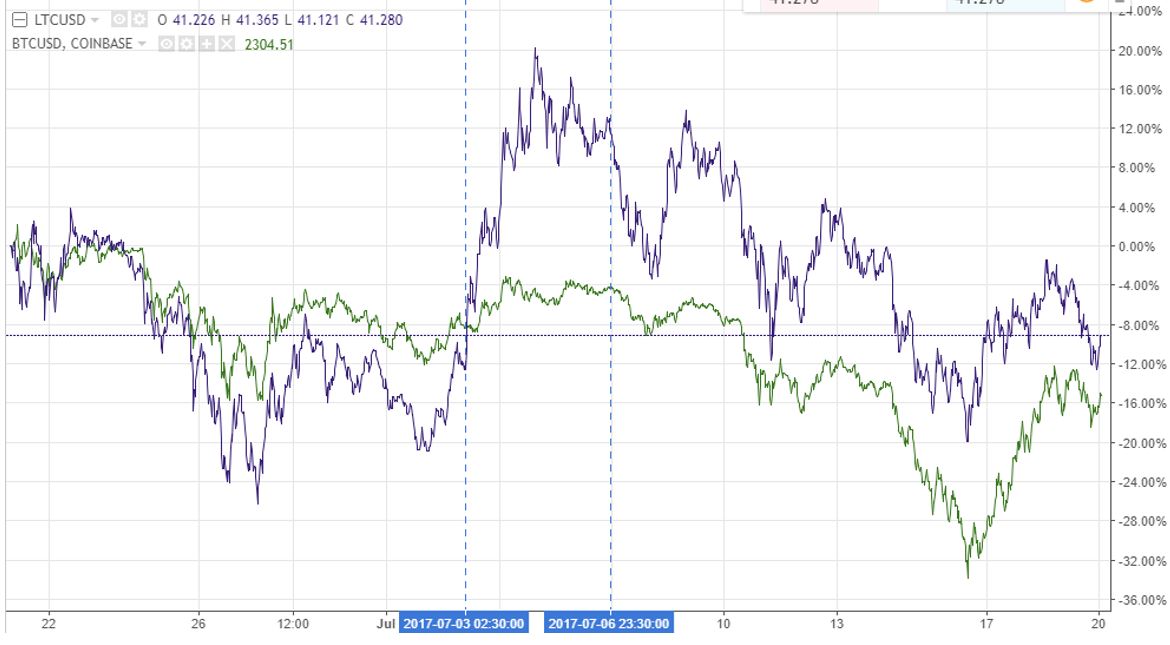 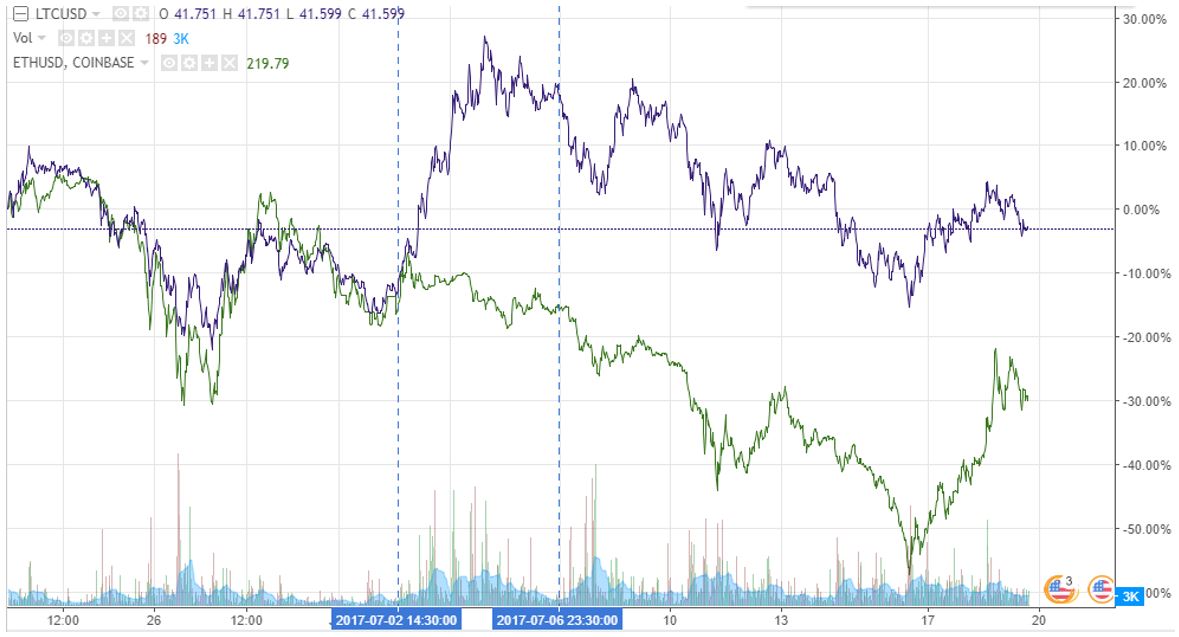 From a demand perspective, when taking a quick look at the chart below, one can clearly see that 20k is a top usually followed by a sharp retrace. 20k in fact was a top 4 times since 2012. The good news though is the end of June was the highest top ever for Litecoin. So, the Breakout can continue, but will need a strong new catalyst to breakout as most events that drove the rally in Litecoin’s price, be it code or leadership related, seem like they are already priced in now.

The chart shared above and illustrating Litecoin’s price action for 2017 shows a bullish set up with a clear ascending channel, higher highs and higher lows. The question remains: how sustainable is the upward movement. Some of the reasons Litecoin took off are either related to exceptional circumstances or future potential:

Hence why we think that even with a good vision and solid code, Litecoin needs to differentiate themselves for more upside. As of now, Bitcoin is the authority, Ethereum has the Technology and Litecoin needs to find its “Niche”. The bar is also higher for LTC as after 5 years, it was still in the single digits earlier this year. This is probably something that the community, led by Lee, is trying to achieve through the creation of The Litecoin foundation in April 2017.

For now, we foresee Litecoin hitting $60 in 2017 early 2018 with the possibility of a retrace that could happen either before or after the target is met. How Litecoin delivers value and solidifies its intrinsic value will be key to exceeding that target and that’s what our research Team will be watching closely.

The price of Litecoin touched $400 today. This is a tenfold increase since it broke out of the $36 to $40 level.

Cryptocurrencies have proven to be able to rise very rapidly. They usually rise aggressively in a very short period of time. That’s exaclty what Litecoin has done in recent weeks.

Looking at the Litecoin price chart as it stands today, it is an amazing rally (upper chart pane) on amazing trading volume (lower part). Somewhere somehow this rally has to stop. We believe this is a time to take profits, it is not a time to deploy new funds to Litecoin.

As InvestingHaven rightfully called for a major rally to take place a couple of months ago we would like to (1) congratulate people who took this information seriously (2) stress that even ourselves did not expect such a steep rally.

It is now time to take some profits off the table and deploy to some smaller upcoming coins once the unavoidable correction kicks in. 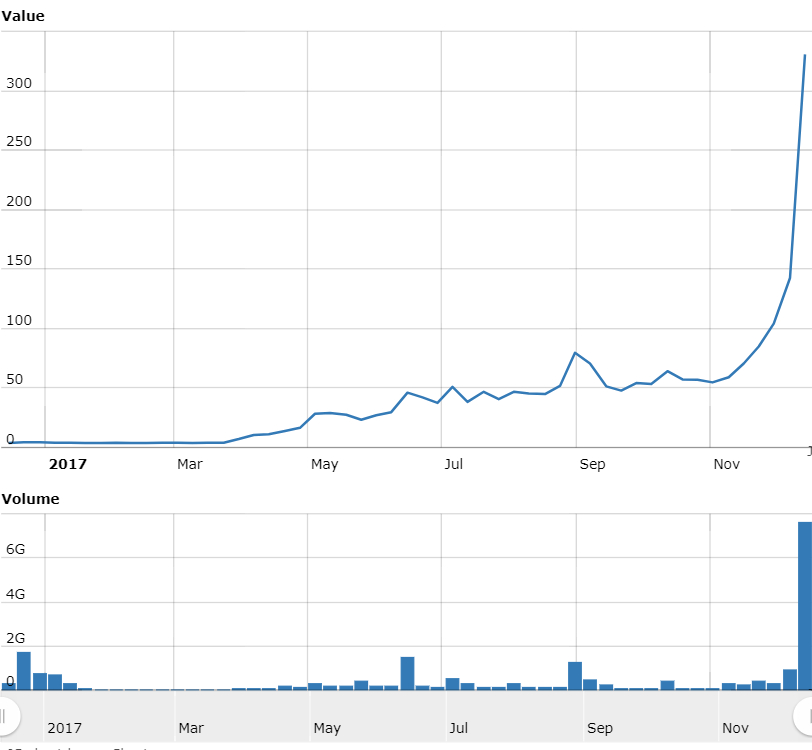