Update mid-November: we expect the 100 USD in Litecoin’s price to materialize before 2018 starts as explained in our latest Litecoin update.

The Litecoin price is acting strongly ahead of Bitcoin’s Segwit and Ethereum’ (ETH)s Byzantium. Earlier this week, Litecoin’s price touched 48 USD. Today, it reached a high of 66.40 USD. A substantial rally but it could rise even more.

Earlier this year, we  published a Litecoin price forecast of 60 USD that was met in August 2017. We later on said that we will likely see Litecoin trade at 100 USD in 2018.

This article covers why we believe Litecoin’s price is still set up to go higher to meet and probably exceed 100 USD in 2018.

Litecoin chart set up is Bullish. In September, Litecoin price dropped rather sharply and fell below its ascending channel. In fact, until mid-september 2017, Litecoin managed to maintain in a perfect uptrend. Its price chart is one of the most stable and least volatile relative to other cryptocurrencies.

We might see some resistance in the 70 USD area but overall, it seems Litecoin’s price is headed toward a retest of the recent all time high in the 90 USD area. If that resistance is broken, our 100 USD price target will be met. 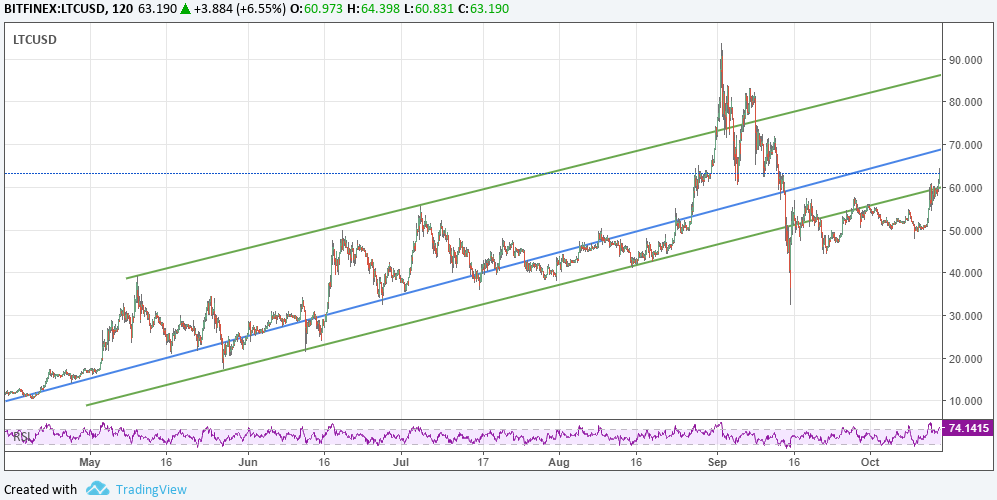 Litecoin became a fast and highly scalable Cryptocurrency after a successful upgrade early 2017 and the deployment of the Lightening Network. The altcoin also benefited from a growing popularity and increased visibility since the creation of the Litecoin Alliance. We are seeing more and more exchanges and online trading platforms offer traders and investors access to Litecoin.

Another important factor investors need to keep an eye on is Litecoin’s merchant acceptance. After succeeding in setting up atomic swaps, Litecoin is now a fast and low cost payment method.

What’s is next for Litecoin price?

Everything considered, Litecoin’s strong underlying technology paired with the efforts we started seeing in 2017 to promote the use and acceptance of Litecoin will pay off in 2018. We could even see our 100 USD Litecoin forecast materialize before the end of 2017. But that will also depend on the overall performance of the Cryptocurrency market.

The conclusion is that Litecoin’s next move will not only be determined by the factors above but also by the overall sector’s performance. A serious technical issue in the sector or a radical change in investors sentiment like what happened after the Chinese ICO ban could have a negative impact on the sector. If that is the case, we expect a delay in the materialization of our forecast.

Does This One Inflation Indicator Forecast A Lower Inflation Rate?

Bitcoin’s Bounce: Does It Have Legs Or Is A Re-Test Of The Lows Underway?