Historical Charts: The Coolest Annotated Chart Section In The World

Note: we continuously add long term charts on this page, not only throughout 2019 but also later. That’s why readers are advised to follow our long term chart analysis work by subscribing to the free newsletter below, you will be notified when there is a new long term chart available.

We feature historical charts primarily on the following timeframes:

The added value of lower than 20 years chart and higher 75 year charts is pretty limited in understanding dominant trends.

The first set of historical charts are the gold charts. It is the sector that has such a rich history, but also proponents and opponents. 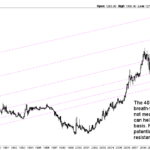 Based on thorough studies of the gold market we have identified the most relevant long term gold charts. We have annotated each of the 3 gold charts to display the patterns that determine the dominant trend. The top 3 gold charts with long term timeframes are the 20 year, 40 year and 50 year gold charts.

The silver price chart on 20 years is featured next. The ‘restless metal’ has a very volatile long term chart. 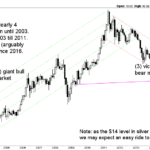 Silver follows gold’s price higher and lower. No surprise. We do not necessarily need to look in each timeframe for silver after analyzing gold’s long term charts. That’s why we only feature the 20 year price chart of silver. The monthly 20 year silver chart is here.

The palladium price chart on 20 years as well as 50 years is featured next. This grey metal has some extreme rallies on its long term chart. 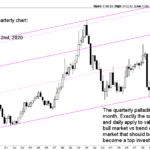 4 Precious Metals – Always A Bull Market In One Of Them

The long term charts of the 4 precious metals show that there is always a bull market in one of them. 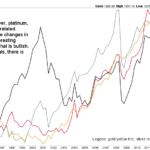 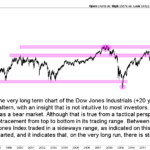 The historical charts of the Dow Jones Industrial show one thing: the high level direction of this index points higher. This implies that bear markets may occur in stocks but they are always temporary in nature. Some consolidations may take several years. In the end stocks resolve to the upside, according to historical charts.

The second asset for which we feature historical charts is Bitcoin. Because Bitcoin only exists since 2012 there is only one long term chart we can feature: the 7 year chart. 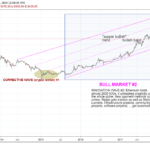 Bitcoin’s historical price chart shows that Bitcoin fell through its rising channel in November 2018. This is not the most bullish development, but the point is that this is part of the corrective cycle in the context of the 2nd bull market with subsequent bear market. Exactly the same happened during the first bear market!

Another commodity which has an amazing historical chart is coffee. The price of coffee is a pressure cooker, ready to explode in 2019! 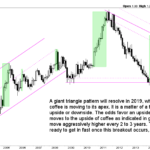 Coffee’s historical price chart has this giant triangle pattern which is about to resolve in 2019. It might be a setup for an explosive breakout. The article discusses the leading indicators for the price of coffee, and which conditions should make coffee bullish within its long term chart setup.

Though not the type of investment that regular investors are looking into we have also covered sugar with its historic price chart. 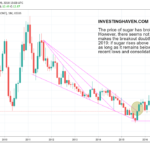 RECEIVE OUR FORECASTS BY EMAIL