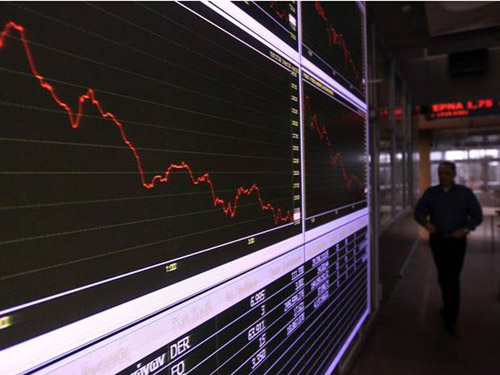 Goldman Sachs (GS) is the bellwether stock not only for the banking industry but also for U.S. stocks, arguably even global markets. In other words when Goldman Sachs does something exceptional on its chart investors better pay attention.  After a 32 pct decline Goldman Sachs now trades at 10 year support. Any move higher or lower from here will be crucial for this stock, for the banking industry, for global markets and for our 2019 forecasts. It will also provide us pointers to whether a stock market crash is underway.

Financial stocks have been one of the most beaten down sectors since February of this year.

Interestingly, falling banking stock prices coincided with rising Fed rates. As can be seen on below table interest rates were raised by the U.S. Fed from 1.5% to 2.25% in less than one year.

Note that we are not too much concerned with the endless news streams. Any search on ‘Fed rates‘ creates confusion more than anything else. News is mostly noise, which is why we focus on the facts and the trends.

The stock prices of major U.S. banks such as Goldman Sachs, Bank of America, Wells Fargo, and many others went the opposite direction. 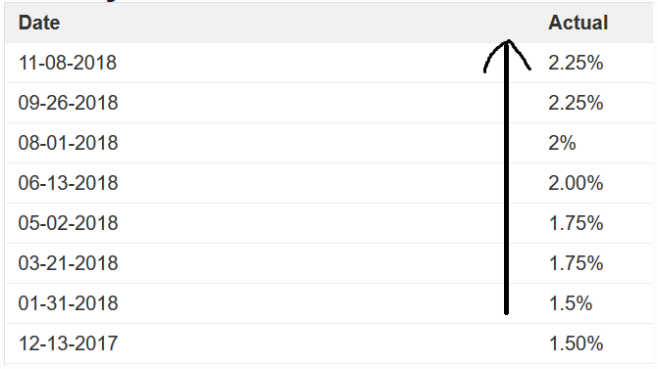 Particularly, Goldman Sachs has attracted our attention. Its stock chart has reached a critical zone, a make-or-break level. Whatever happens from here will be of the highest importance.

As seen on the weekly chart of Goldman Sachs embedded below the really crucial level comes in at 175 points. At the close of Friday December 7th Goldman Sachs was trading at 179.67 points.

The bearish case starts below 175 points: any sustained breakdown for minimum 5 consecutive trading days below 175 points will mark a breakdown, and will create more bearish energy, both for Goldman Sachs and the banking industry. In such a scenario there is downside to 161 followed by the most important support level at 134 points.

If the price of Goldman Sachs reverses from here then we will see 221 as a first price target. That’s where important overhead resistance sits.

It seems obvious that there will be serious volatility around the 175 level so we likely have to wait before we see the next big move.

This is just our research opinion, not a solicitation to buy or sell a securities.