Which Is The Biggest Investing Opportunity Of This Decade?

Each market crash comes with opportunity.

In 2020 we experienced the fastest and most violent crash in +200 years history of stock markets. The Corona crash may have been short lived, as the crash unfolded fast and the subsequent recovery was powerful. But many investors and traders have lost fortunes.

The million dollar question is which opportunity comes out of the Corona crash? If history is any guide we can reasonably expect a powerful booming bull market in a certain market or asset, similar to gold/commodities boom in 2001-2011 as well as the crypto boom in 2010-2020.

We assume that history does not repeat itself, but it rhymes. If so which secular bull market is now underway?

If we want an answer to this question we have to look for similarities between the secular bull markets that did arise out of the previous two crashes.

So let’s start by analyzing how the previous 2 decades unfolded. We might get some clues about what to look for as it relates to the next big boom.

In order to understand the rotation that followed the 2000 dotcom crash we start by watching the decade that preceded it.

The Nasdaq was rising for an entire decade, and eventually printed a blow off top in 1999 (with a major peak in March of 2000).

After the dotcom crash there was a huge rotation out of technology and growth into value sectors. Commodities did extremely well, gold reflected the debasement of money and highly inflationary monetary policies, the monetary base exploded, interest rates started an historic decline.

Real estate did very well in this environment. But the big bull run in financial markets was in commodities and especially gold/silver. The decade before there was no such thing as a commodities nor gold opportunity. There was a huge rotation which was the result of the dotcom crash.

Please take a minute to compare the two charts above: the secular Nasdaq vs. the secular gold charts. This is exactly our point: a big rotation between assets.

This micro-documentary looks at the macro trend of the debasement of money by explaining how the monetary system works, fundamentally. It was created by one the members in our team, back in 2013. It is still relevant, more than ever even.

Out of the ashes rose Bitcoin, a cryptocurrency on the blockchain. The blockchain is decentralized and based on trust, exactly the opposite characteristics of policy makers like central banks.

The concept of money started a revolutionary turnaround. The masses are familiar with cryptocurrencies, 10 years later. Even though many are not using cryptocurrencies at the time of writing we clearly see first signs of mass adoption, and we see that millennials love the idea(s) behind crypto. They will ensure crypto will get traction.

While the period 2001-2007 was great because of loose monetary policies it became clear in 2009 that the consequences of loose policies can be disastrous. The market crash of 2009 resulted in a once-in-a-lifetime type of investment opportunity: crypto. This crypto market had the exact opposite characteristics compared to the hot sectors of 2001-2007.

Please take a minute to compare the last 2 charts: Bitcoin (BTC) vs. financial stocks (XLF). Both assets may be in the same cloud of finances and money, but they reflect the exact opposite underlying concepts: decentralized vs. centralized finances.

If we want to forecast which sector(s) will be the one(s) that will offer a once-in-a-lifetime type of opportunity in the current decade we likely have to apply the same logic as in the previous 2 decades.

In other words, IF a new once-in-a-lifetime type of opportunity is emerging it must have the exact opposite characteristics of the hot sectors from the previous decade. It’s the big rotation we want to find.

What was hot in the previous decade, and what not?

As seen on the next secular chart commodities went through a destructive bear market. However, we can see that commodities printed a giant bullish W reversal between 2014 and 2021.

Similarly, but even more outspoken, is the bullish W reversal in the context of a big bear market in base metals.

Let’s change our viewpoint for a minute. Do we see any first signs of any major bull market right now? Let’s review the ones that we can observe at this point in time.

First, everything digital and remote is hot right now. Think remote meetings, digital signatures, digital commerce, etc. Now this is not a new trend, it’s here for a long time. Corona simply accelerated it. Will this space bring once-in-a-lifetime type of opportunities? Not sure, probably not.

Third, in the health space we might see a new trend which is global and local pandemics. Wait a minute, how does this relate to the previous decade? No real relationship similar to what happened prior to the previous 2 big crashes. This is a dead end, according to us.

Fourth, contactless payments and instant payments. This is fintech. It’s a big trend, and one that will continue to grow big. Innovative fintech companies have been growing fast in recent years, and the global pandemic has accelerated the demand for these services. Some of the companies we like a lot are Moneygram (MGI, Nasdaq) and Novatti Group (NOV.AX), among many others. We have featured these stocks in our premium services, and they have returned double digit profits for investors that took these positions. We like this trend a lot, but we don’t see the similarity with the previous 2 decades. Fintech stocks don’t see an inflow because of a rotation out of an ‘opposite’ asset that was hot in the last decade. So it’s not the trend we are looking for.

While underlying technologies to facilitate renewable energy will do well, without any doubt, we believe the similarities with the previous 2 decades leads us to believe that the commodities are the ones that will be the biggest outperformers.

If we look at the macro trend(s) of energy we see that new forms of renewable energy are only starting to grow. It looks like the start of a much bigger trend. 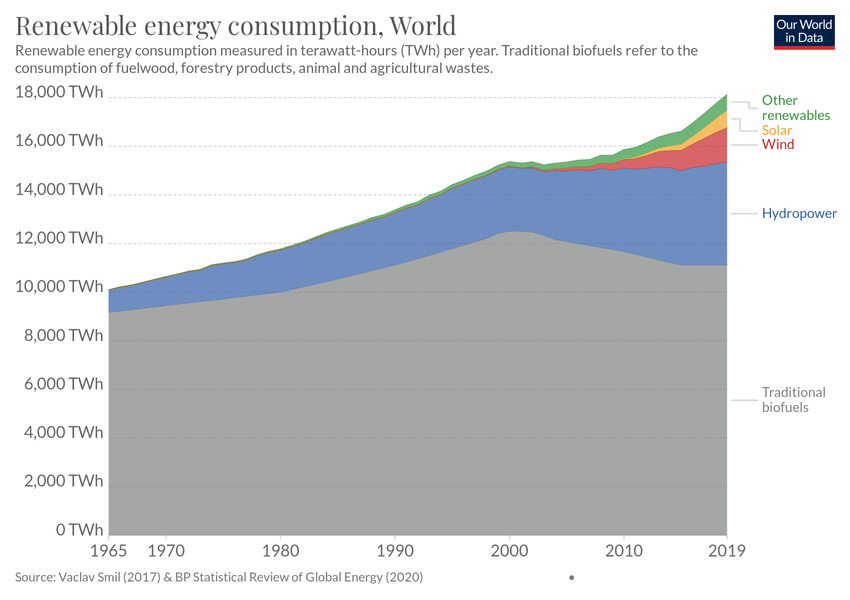 Similarly, old forms of energy like coal are declining fast. New forms of renewable energy are on the rise, but are still small in relative terms.

Moreover, electric vehicle sales are only starting to take off. Major car producers are starting a new wave of mass production. It’s just the start, so we cannot look around us and observe how big this trend is. It is the start. And as we know financial markets are great in ‘sniffing’ new trends, and anticipating 6 to 9 months before trends make it into the real world. 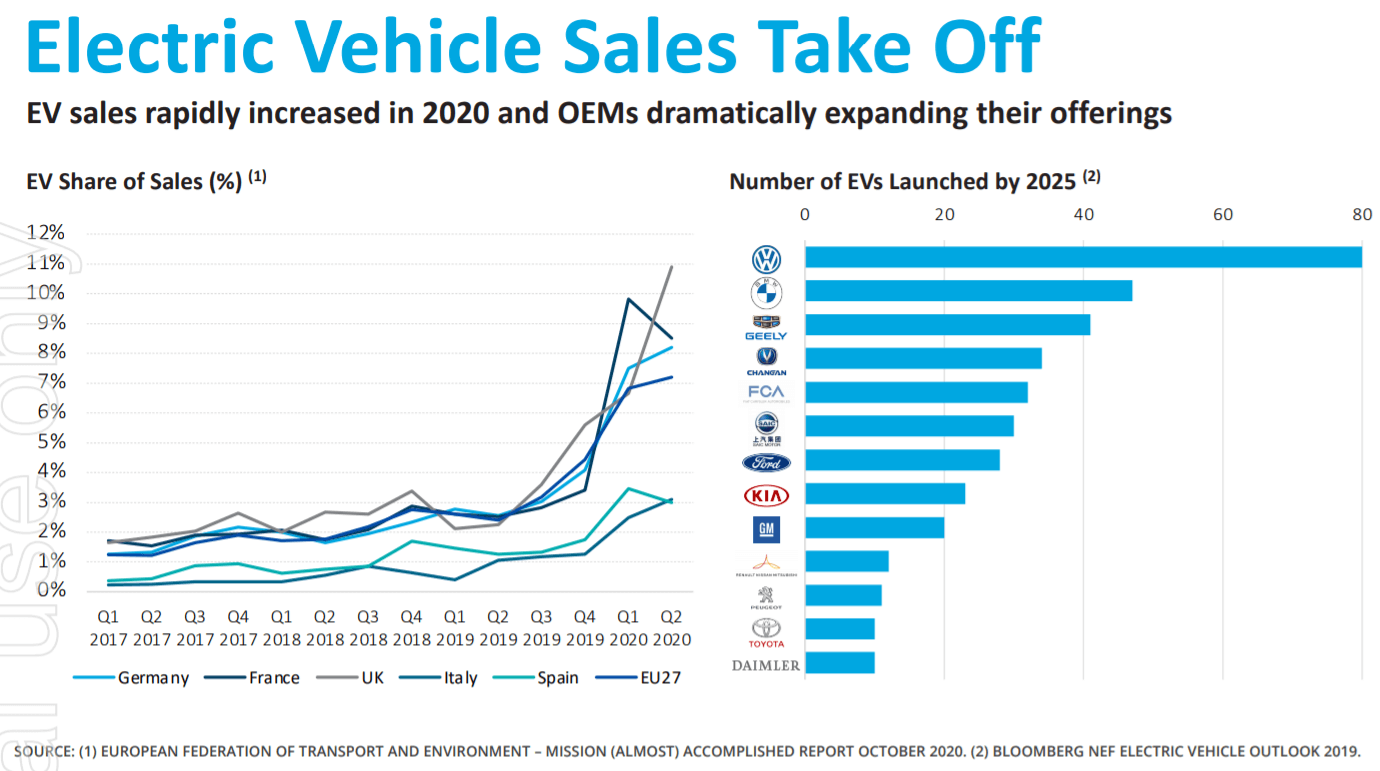 Will this be the next big thing. Will this offer once-in-a-lifetime type of opportunities?

It could be. Probably it will. But specifically the commodities that are inputs into this secular renewable energy wave.

Moreover, this makes sense, fundamentally. Commodities prices typically react on supply/demand dynamics. If renewable energy is going to continue to grow this decade it will be the commodities as inputs into green batteries that will be in high demand, ultimately even potentially in supply deficit. IF this is what’s underway the market will react to this, way before the real deficit hits in the real world.

Here is one projection that makes the point. 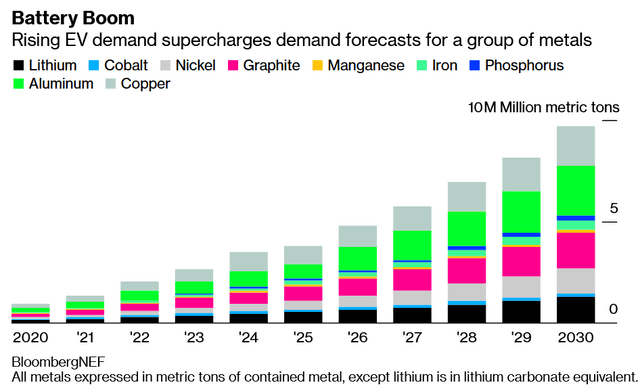 And here is another chart that leads to a similar conclusion. 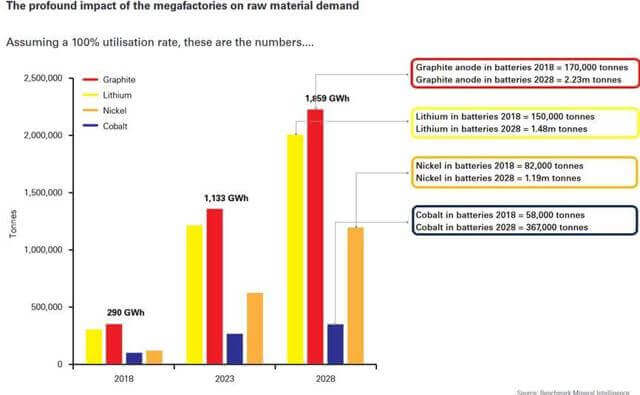 We believe it makes so much sense that the big booming industry in 2021 and beyond will be commodities that are inputs into renewable energy. Think strategic metals like lithium and cobalt, but also rare earths like titanium and rutile. Think nickel and graphite. Think vanadium.

Would you agree that commodities that are inputs into renewable energy will be the next big boom? Do you think another sector(s) will be booming? Let us know by shooting us a message investinghaven at gmail dot com.