Ripple’s Price Flash Crash After It Peaked. Buy or Sell?

Ripple price dropped by 30% within 24 hours on January the 9th. There are multiple reasons that could have caused what some would refer to as a Ripple flash crash. While we cannot deny that there is always that 1% of news or events that could trigger a certain price action, we prefer to stick to analyzing the chart and price action to understand what is happening and forecast upcoming price direction.

This is exactly what we did to successfully forecast Ethereum reaching a 1000 USD value earlier this year and forecasting Ripple reaching 2.50 USD for instance.

It is amazing how many reader and investor questions we received last week about what’s next for Ripple’s price as well as whether this flash crash signals the end of Ripple’s uptrend.”

To answer the question, let’s look at what happened to Ripple price on January the 8th 2018.

The chart below shows the steep drop in Ripple price. The action was fast but we note the quick recovery and the massive buying that happened.

Of course financial media was quick to call the Crash in Ripple price and mention multiple reasons for the price action especially since Bitcoin price was retracing as well. Of all the news and “events” that were mentioned, there is one that stood out to us: How Coinmarketcap removed Ripple’s trading price in South Korean exchanges from the global average calculation of Ripple and other currencies.

Because Ripple and most major Cryptocurrencies are trading at a premium in South Korea, the new price average excluding the South Korean quote was ridiculously lower causing a sharp and quick sell off. As far as we know there is no fundamental reason for Ripple’s sharp retrace.

From a Ripple Price chart perspective, the story is different. Let’s take a look at where this significant price drop fits in a longer time frame.

The story couldn’t be any clearer: After a major run, Ripple price reached the top of the ascending channel and retraced. It is to be expected that this important resistance will not be broken as of the first attempt.

If anything, this price action probably signals the start of a healthy retrace prior to resuming the uptrend. The chart below shows how there is lateral support in the 1 USD area and if it doesn’t hold, there is massive support in the .36 USD area. We doubt it will get there since there are multiple catalysts lining up for Ripple.

As long as Ripple price stays above .36 USD, the uptrend is intact. Is it going to get there? Probably not. The likely scenario is a sideways movement in the top part of the channel before the next run to new highs.

So we remain bullish long term on Ripple, the recent price drop is certainly not a reason to be bearish though we sent out an alert to subscribers to take some money off the table almost the same day Ripple’s price peaked. 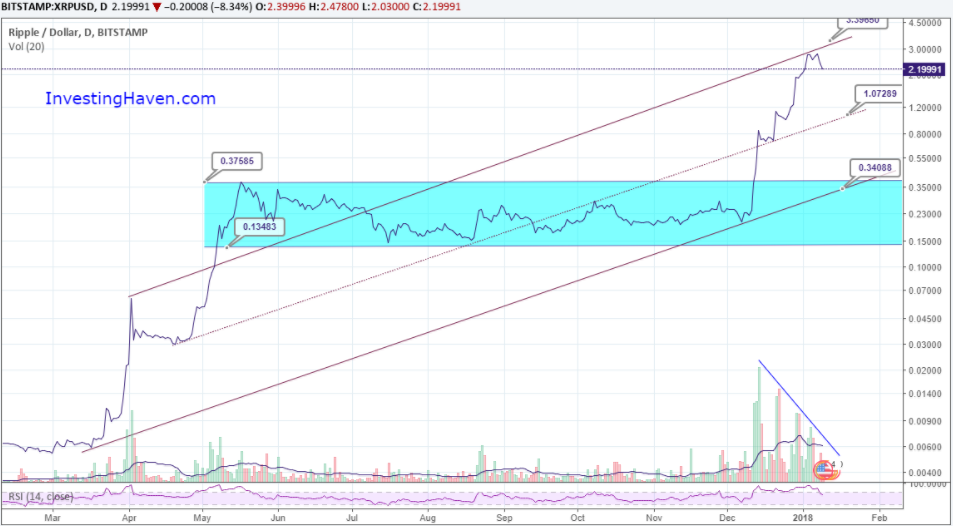