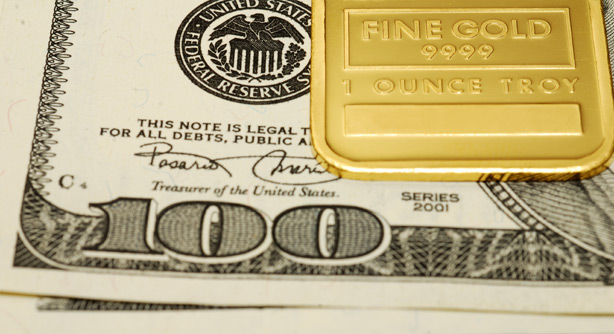 Both gold and the U.S. dollar have an awesome setup. They both suggest what is likely to come next, at least in the short to medium term.

First, the dollar corrected more than 10 percent since the first days of this year. That is meaningful for the most traded currency in the world. The dollar has a track record of being volatile. Right now, the dollar index stands at 93.19 points; it visibly is forming a bottom over the last 4 weeks, with a series of higher lows. There is always a possibility that the dollar goes lower from here, which will be once 92.25 points is broken to the downside.

However, the most likely path for the dollar is higher from here. That is because the 92 to 94 area has serious support, going back almost 3 years.

Because of that, we believe that the dollar will go higher from here. If that were to happen we see several potential effects on other markets which were described in this article Implications Of A Rising U.S. Dollar (which we forecast based on our intermarket dynamics method).

Gold, which is often considered to move in the opposite direction of the dollar, shows a totally different setup: a consolidation. Interestingly, the inverse relationship between the dollar and gold is not that inverse as most think.

Another, more actionable insight from gold’s chart, is that gold is now consolidating around $1300. It will be very important for gold’s future direction to see what happens in the $1300 to $1330 area. Why? Because that is the breakout area. In other words, once gold moves above that area it will become very bullish, and its bear market could be ending.

The current setup of gold does suggest that the $1200 to 1300 area has become a very strong support area. That suggests the next move is higher, rather than lower. However, a longer term consolidation is the cards as well.