In this article, our aim is to explain in simple words how Bitcoin Cash is a possible and likely outcome of the upcoming bitcoin upgrade on August 1st.

During the week of July the 23rd, it became clear that Segwit has finally secured the support of the majority of miners therefore reducing the risk of a hard fork. The fork would have lead to orphaned blocks that won’t be recognized or supported after the split happens. One potential hard fork scenario is still looming nonetheless. That scenario is a Hard fork leading to the creation of Bitcoin Cash.

Differences of opinions, roles and views of the roles of Cryptocurrencies and the vision behind the creation of Bitcoin has led to a long and interesting debate concerning the upcoming Bitcoin upgrade. One group of the Bitcoin community decided that a User Activated Hard Fork (UAHF) to update the Bitcoin software was a good option to enhance the performance as well as offer a longer-term solution to the scalability problem Bitcoin is facing.

This solution, if activated, will create two Cryptocurrencies Legacy Bitcoin (Bitcoin as we know it today) and) and Bitcoin Cash. All current Bitcoin holders will automatically own one Bitcoin Cash and one Bitcoin Legacy for each Bitcoin they own pre-split. Since the existing ledger from the time of the split is preserved, users can choose which Cryptocurrency they will keep.

How is Bitcoin Cash different from Legacy Bitcoin?

What you need to know

You need to control your private keys if you own any Bitcoins. Every user who owns bitcoin will have a Bitcoin Cash as soon as a split happens. To be able to keep a Bitcoin cash instead of a Bitcoin legacy, you need to have access to your Bitcoin cash tokens.

In case your Bitcoins are in an exchange that doesn’t support Bitcoin cash at the moment of the split, your options will be limited. In fact, you only have access to whatever alternatives exchanges offer their clients and whichever currency/chain they support. This is why we can’t stress enough how you should back up and maintain your private keys during the upgrade for maximum flexibility.

Checking your wallet’s or exchanges webpages and making sure you are aware of the procedures, the restrictions and what will be supported moving forward is of utmost importance for a seamless transition and avoiding costly surprises.

Here is an example of a call to action from a Bitcoin wallet Electrum with some important information. Again make sure you are aware of the instructions from your own wallet or exchange if you decide not to transfer your coin (not advisable). 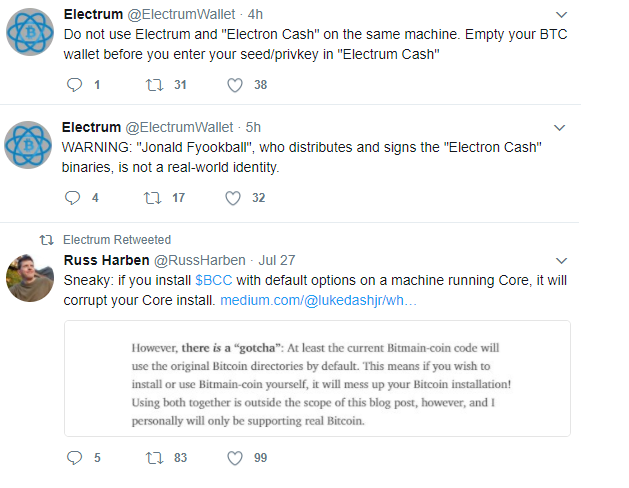 Although this user activated hard fork will lead to the creation of a new Cryptocurrency in case it’s activated and the words “Hard Fork” are usually cause for concern, there is a positive side to this scenario. In fact, even in the event of a hard fork and the creation of Bitcoin cash, this is not going to “erase” previous transactions or create orphaned blocks. Therefore, this UAHF is most likely not going to leave investors and owners at a loss provided they have control of their private keys and are informed as to what needs to be done depending on what chain they choose as well as the wallet or exchange where their Bitcoins are held.

Once Bitcoin Cash is created, we will simply have 2 Cryptocurrencies that will coexist with the rest and a scenario similar to Ethereum and Ethereum Classic. The important question one should ask is which one is most likely to not only survive but protect and increase its value for miners, users, investors and developers.

For more information, check out the Bitcoin Cash page and make sure you read about their strong replay protection. Other possible scenarios were share in this article by InvestingHaven. We also published an article last week explaining the Terminology related to Bitcoin’s upcoming upgrade to provide the information required for further research.