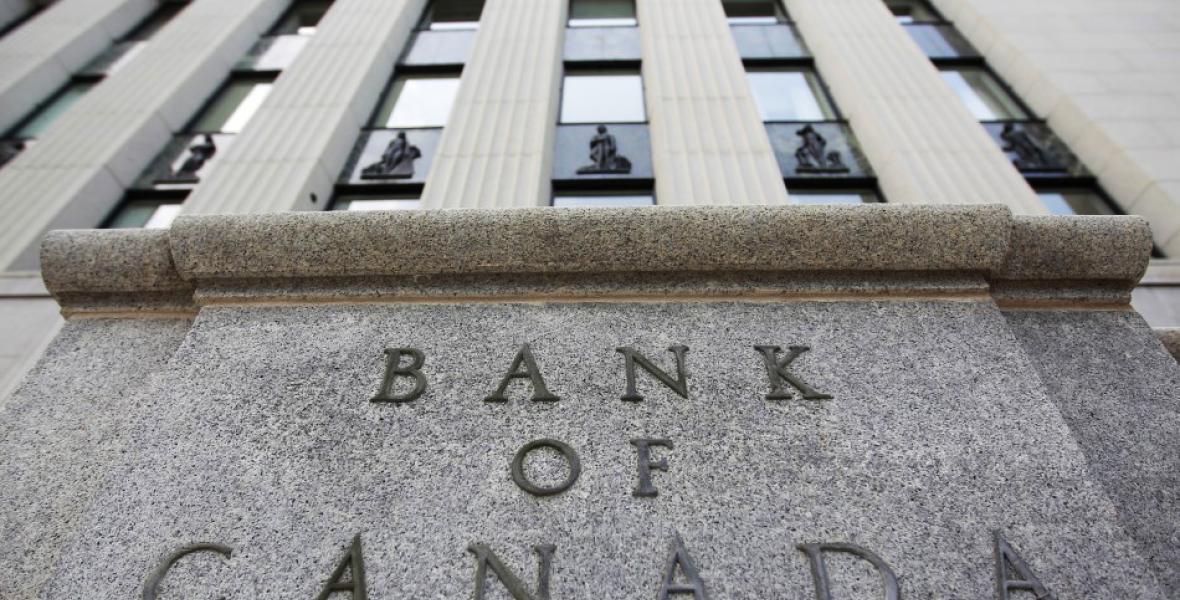 Our article today will provide a Canadian Bank stocks outlook for 2018 based on 3 key factors. Keep an eye on Investinghaven as we will also provide our top 3 picks in the Canadian banking sector over the course of the next days.

What will happen in this sector now that Bank of Canada increased the rate for the 1st time? Are we about to witness the start of the downfall of Canadian banks? What about the housing bubble in Canada? Are Canadian Banks undervalued for how strong and profitable they are?

To answer these questions, as usual, we will starts with price charts and identify meaningful patterns.

On July the 12th , we witnessed an important event in the Canadian market : The Bank of Canada raised Canada’s key interest rate for the first time since 2010 by a quarter of a percentage point. This increase was followed shortly after by a second increase on September the 6th of another quarter of a percentage. That is big news for Canadian and international markets.

Given the importance of this event, we decided to share with our readers our Canadian Bank stocks outlook for 2018. To provide an accurate outlook of the Canadian banks, this article includes:

A top 3 Canadian banks picks in 2018 will follow in a separate article.

Canadian Bank stocks outlook 2018: An overview of the Canadian Economy 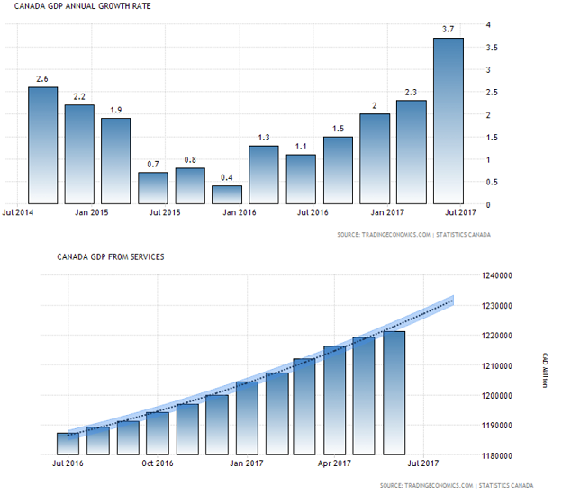 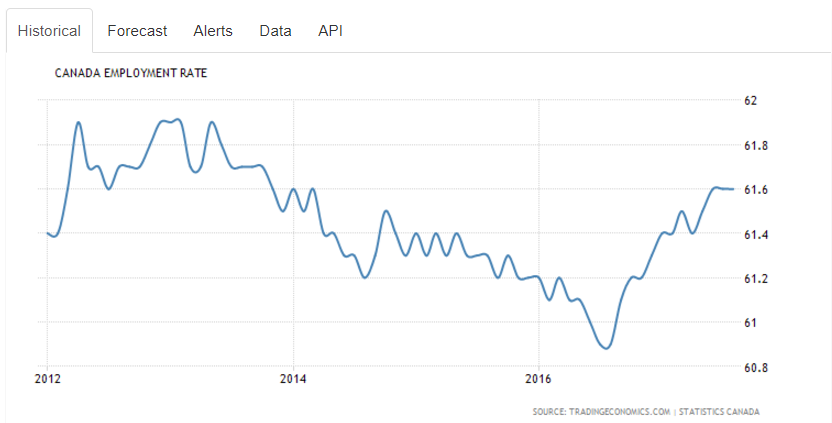 The 2 consecutive interest rate increases from the Bank of Canada in 2018 will give the country’s lenders a much awaited boost in lending margins.

The next chart is very important for the future performance of Canadian banks. It represents the evolution of Canada’s prime rate. As we can see, Canadian banks had to deal with smaller margins but managed to actually post record revenues year after year. This speaks to their ability to reduce costs and generate revenue based on the diversification of their activities. Now that the Bank of Canada increased it’s leading interest rate, banks are following and this should provide an increase of their revenues.

Some analysts are voicing concerns about a possible rise in defaults after the rate hike. It is a legitimate concern however the interest rates in Canada are so low that even after the recent increase, they remain historically low.

Low borrowing costs, robust employment growth combined the impressive non farm payroll chart shared above and the overall economical indicators signal that at least in 2018, there won’t be any Bubble burst in the Canadian markets.

A clear beneficiary of lower interest rates is the private sector as shown below. Canada houses many successful start ups especially in the technology sector and the country is starting to reap the benefits of investing in the private sector.

In addition to the evolution of the Bank of Canada’s interest rate, the development in the following 3 sectors is of a crucial importance to our Canadian banks outlook and the performance of this sector in 2018.

Since then, the Canadian housing market has slowed down in price gains nationally to around 10% in 2016 with wide regional variations. What’s important for investors to distinguish is that the concern with the Canadian housing market is/was caused by 3 cities: Toronto and area (GTA), Vancouver and Calgary. At the time of publication, some are stabilizing. To sum up the developments in these hot real estate spots, we will quote the most recent publication by Scotiabank:

Vancouver’s housing market is regaining momentum. While sales were relatively flat m/m in May, this followed a 30% increase over the prior three months. Sales have now reversed much of last year’s weakness, and are again trending back above their 10-year average.

Calgary’s housing market is showing further signs of recovery. Supported by strengthening labour market conditions, sales are up 9% from a year earlier, while lower inventory levels have stabilized prices. Improving momentum also is evident in Montreal and Ottawa. Sales and prices in both markets have accelerated over the past year, underpinned by solid job growth and good affordability.

Toronto and its surrounding municipalities (including Oakville-Milton, Hamilton-Burlington and Barrie) account for much of the recent slowing in national sales activity. After hitting a record high in March, GTA home sales tumbled 31% in April and May – Scotiabank

So we will continue to monitor the Canadian real estate market, but so far, with the BoC tightening measures, we should see more stability and for now, it’s not a concern. At least not for 2018.

We will focus on the Oil industry for two reasons:

Reason # 1 The main thing that prevented the Bank of Canada from raising the rates since 2015 (after the Fed did) was the collapse of oil prices that reduced the Canadian annual income by more than $50 billion. So as the Canadian oil industry is recovering, which is very dependent on oil prices, we can expect that the BoC will maintain the increased rates or even proceed with follow-up rate hikes in 2018 (provided the housing market and general economy supports).

Reason # 2 is the fact that Canadian Top Banks have an important exposure to the energy sector, particularly oil and gaz. It can directly impact their loan book. The good news is we have seen how they have taken the necessary measures to brace for the lower oil prices directly impacting the national industry. Some of them even managed to increase dividends during that same period.

Although we don’t foresee any crucial threat (at least for now) from new players in the financial market, traditional banks need to remain competitive when it comes to fintech adoption and innovation. Most Canadian banks are relatively quick to adopt new tech or even develop their own.

A good example is their involvement in the testing and even the adoption for some institutions of the new Blockchain technology in the financial industry.

So even if it’s not as crucial (in the short term) to be concerned about this factor, smart investors need to watch the development in the Fintech industry and how the banks they select to invest in compare to peers. This will be key to surviving in this industry in the next 10 years. For now, Canadian banks are competitive and very involved hence our Bullish Canadian banks forecast for 2018.

The table below gives an overview of the top 5 Canadian Banks in Canada by Revenue, deposits and Loans. In terms of the ranking by asset, TD bank is ranking now as #1 as of April 2017. Solid figures when you consider the population of the country and the historically low interest rates.

The chart below provides an overview of the performance of the Top 5 Canadian banks for the last decade. The chart shows a healthy uptrend.

During the global financial crisis of 2008, the shares of Canadian banks dropped between 35 to 50% depending on the institution. What’s worth noting is how quick they recovered though. After bottoming in 2009, they recovered most of their losses in less than 6 months to continue their uptrend.

How defensive are Canadian banks in the case of a stock market correction?

The answer to this question represents a pillar for our Canadian banks forecast for 2018. The chart below shows a comparison between the performance of the Canadian 10 year Bond and the Top 3 Banks in Canada: RBC, TD and the Bank of Nova Scotia.

The top portion of the chart shows the performance of RBC (in Blue) TD (Green) BNS (Red). The bottom is Canada’s 10 year bond. 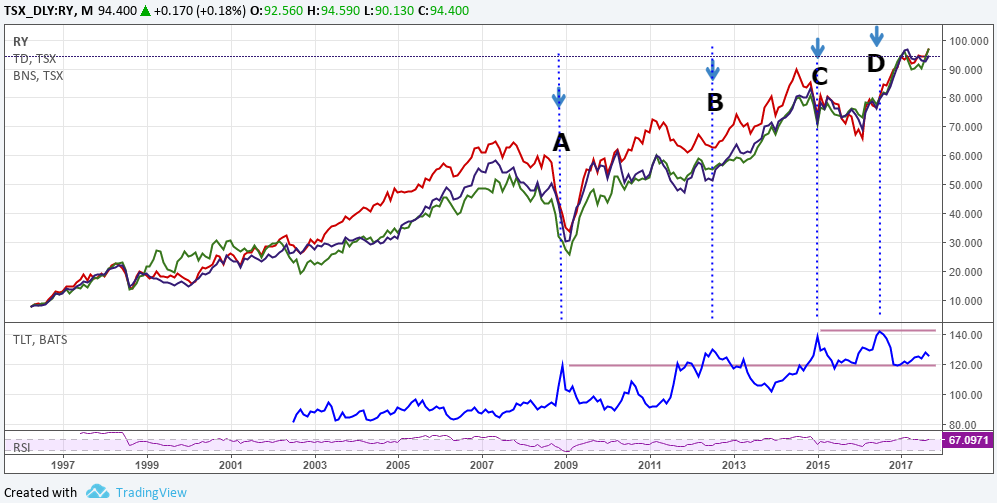 The chart suggests a couple of things:

Note that A & C represent a time of Global economical turmoil ( A Global financial crisis including the US subprime mortgage crisis) ( C Chinese stock market crash).

Our Canadian bank stocks outlook for 2018

In short, we are bullish for several reasons:

For these reasons, we believe our Bullish Canadian banks outlook for 2018 will likely be accurate. Our next article will cover the 3 banks we believe will benefit the most from this positive outlook for the sector.